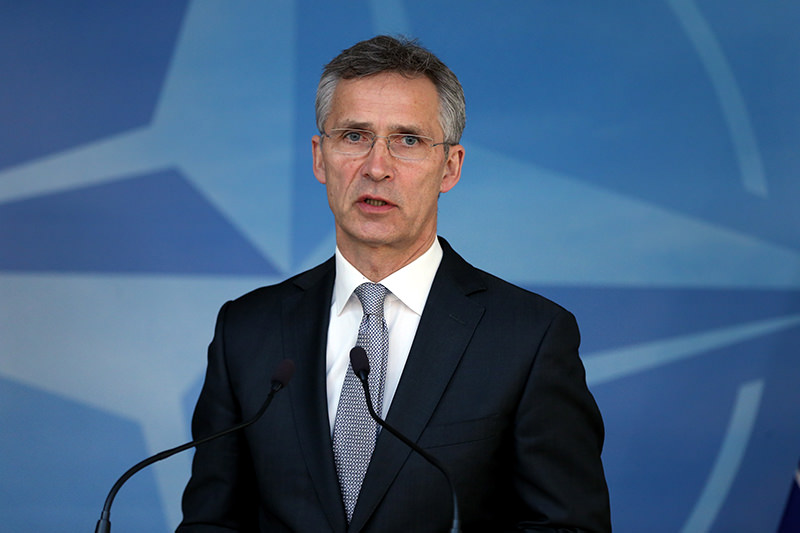 NATO Secretary-General Jens Stoltenberg said that NATO ,stands in solidarity with Turkey, in the face of such attacks. (AA Photo)
by Daily Sabah with AA May 09, 2016 12:00 am

NATO chief Stoltenberg on Monday expressed concern over the deteriorating situation in Turkey's Kilis border province, which has recently been hit by several Daesh rockets fired from Syria, killing dozens of civilians.

In a written statement, NATO Secretary-General Jens Stoltenberg said that NATO "stands in solidarity with Turkey" in the face of such attacks.

"I am concerned by the deterioration of the situation in Kilis and the shelling [by Daesh], which directly affects the security of Turkey," Stoltenberg said.

"I deeply regret the losses of many Turkish nationals' lives in Kilis, and extend my condolences to the Turkish people and the families of the victims," he said.

"NATO stands in solidarity with Turkey. The alliance has taken [preventative] measures to strengthen Turkey's security and will continue to do so as long as necessary," he added.

Stoltenberg also spoke on the phone on Monday with Foreign Minister Mevlüt Çavuşoğlu who was in Paris for a foreign ministers meeting of like-minded countries. The two discussed the current situation in Syria as well as the current threats Turkey s facing. Stoltenberg also offered his deepest condolences to those who lot their lives in the rocket attacks on Kilis.

Turkish towns and provinces have been repeatedly struck by cross-border fire from since mid-January.

In Kilis province alone, the local governor said 20 people have been killed and almost 70 others wounded by rockets which have fallen inside Turkish territory since attacks began earlier this year.

Speaking on May 2 after a Cabinet meeting chaired by President Recep Tayyip Erdoğan, Turkish Deputy Prime Minister Numan Kurtulmuş said that in the last three months 55 rockets had been fired by Daesh into Kilis.

Retaliatory artillery fire and airstrikes have killed dozens of Daesh terrorists. According to military sources, a total of 2,144 Daesh targets have been struck in Syria since last July, with 807 Daesh militants killed. A further 365 have been killed in Iraq.

On May 2, Turkish forces struck Daesh gun emplacements and ammunition dumps in the Suran, Arshak, Ikdakh and Ihtimalat regions on the Syrian side of the border, initially killing 50 terrorists. This figure later rose to 64.