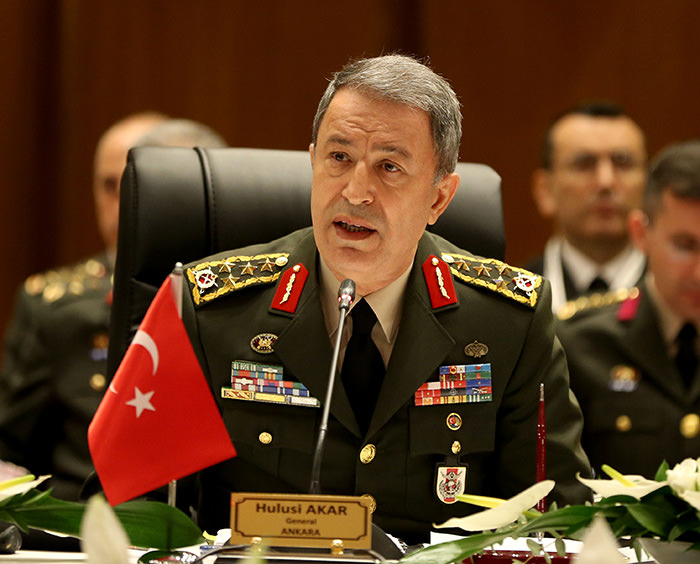 Turkey's Chief of Staff General Hulusi Akar said on Wednesday that the country's determined stance against terrorism will continue until all terrorists are cleared out both inside the country and those that are threats to its national security.

Amid the Daesh terrorist group attacks on Turkey's Syrian border province of Kilis, Akar said in Istanbul that Turkish security forces act as a unified force against Daesh and that 1,300 terrorists have been killed in recent operations.

"In recent days, in addition to bloody suicide attacks towards our major cities, the Daesh terrorist group has been targeting our border town of Kilis," Akar said.

"As the Republic of Turkey, we have defined Daesh as a terror organization since 2013 and since then the group receives the treatment of a terror group," he added.

"Turkish forces have killed 1,300 Daesh terrorists, destroyed a large number of weapons, rockets, posts, vehicles, and buildings since the launch of operations," the Chief of Staff said.

Turkish towns have been repeatedly hit by rockets from across the border since mid-January this year. In Kilis alone, the local governor said 20 people have been killed and almost 70 others wounded in Daesh rocket attacks from Syria.

On May 2, Turkish forces hit back and struck Daesh gun emplacements and ammunition holds in the Suran, Arshak, Ikdakh and Ihtimalat regions along the Syrian border, killing 64 terrorists.

On Jan. 12, Daesh conducted a suicide bombing in Istanbul's Sultanahmet Square that killed 12 German tourists and wounded 13 others.

On Saturday, Turkish jets hit four DAESH positions in Northern Iraq, following a stray projectile that killed one Turkish soldier and wounded another at a Turkish military base in the region.

In addition to the Sultanahmet suicide bombing, Daesh has also been linked to a number of other suicide bombings in Turkey, including the March 19 attack on Istanbul's İstiklal Avenue that killed three Israelis and an Iranian tourist.

In the worst attack in Turkey's history, 103 people were killed in the October 2015 twin suicide bombings at a peace rally in Ankara.