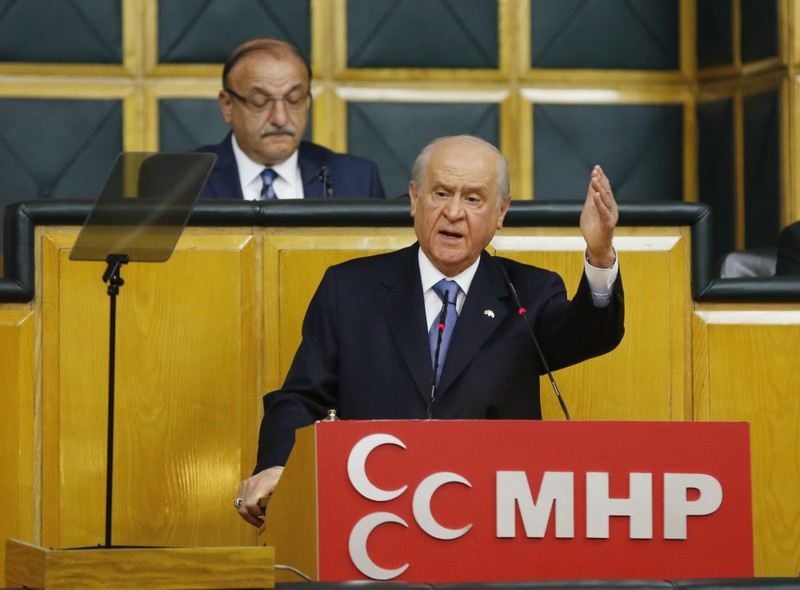 The MHP is ready to offer full and unconditional support to the AK Party government in the fight against PKK terror, MHP Chairman Bahçeli said at his party's parliamentary group meeting on Tuesday

Nationalist Movement Party (MHP) Chairman Devlet Bahçeli said on Tuesday that his party would give unconditional support to the government in the threat against terrorism. In previous statements made over the weekend, Bahçeli said that, regarding the need to protect Turkey's national and historical interests, the MHP's support for the government could further enhance the legal support. Some have taken Bahçeli's remarks as a sign that the MHP would support the establishment of a presidential system. Clarifying his remarks during the MHP's weekly group meeting at Parliament on Tuesday, Bahçeli said that the party would support the continuation of the fight against terrorism with full determination, adding that the MHP is united with the Turkish nation and state. "The MHP is on the same side as Turkey. We would give all our support in Parliament if the fight against terrorism shows weakness after the AK Party's [Justice and Development Party] convention," Bahçeli said, "We are ready to take all responsibility, patiently, until terrorism is eradicated."

He went on to say that "The MHP has been supportive of the government. The nationalist opposition can sacrifice itself blindly for his country when necessary. The MHP is ready for every proposal and open to a moral duties in order to protect our sacred homeland as well as national sovereignty that is based on democratic governance, thus eradicating terrorism. This is what I meant when I mentioned bringing our governmental support to the legal level ," Bahçeli said.

The MHP chairman also pointed out that those who aim to create an environment conducive with snap election at a time when Turkey is in a critical stage, as well as those who continue their intensive fight against terrorism in the wake of Prime Minister Ahmet Davutoğlu's announcement of resignation last week amounts to "treason." Bahçeli said,"Speculative talk about early elections fosters instability and causes ruin. Speculative talk about the ballot box is the equivalent of murder to democracy," Bahçeli said, in an attempt to block efforts from MHP dissidents who challenge his party leadership. He also said that naysayers who claim that expectations for a presidential system are a pure reflection of what the nation wants as a whole are invalid. "If a presidential system is established, will Turkey become a rising star globally or will all problems in the country be solved automatically? Let's assume that we have a presidential system; what is going to change? What miracles will happen?" Bahçeli asked.

"We have no party to hand over to the 'parallel [structure],' " Bahçeli said early April, adding that the date for a congress is March 18, 2018. Claiming that the Gülen Movement wants to design Turkish politics through the MHP, Bahçeli contended that it will never reach this goal. "I see people who scream out with joy. No one should have desires in this vain," he said.

Railing at the Gülen Movement, Bahçeli accused what he called movement-affiliated people of hypocrisy over the appointment of trustees to the party. "I am telling this group that raised hell when trustees were appointed to their institutions: You deserve everything you have experienced so far. These [people] are hypocrites," Bahçeli said. He also labeled Gülen Movement-affiliated people as "the puppets of the U.S. and a disgrace to Islam."
RELATED TOPICS