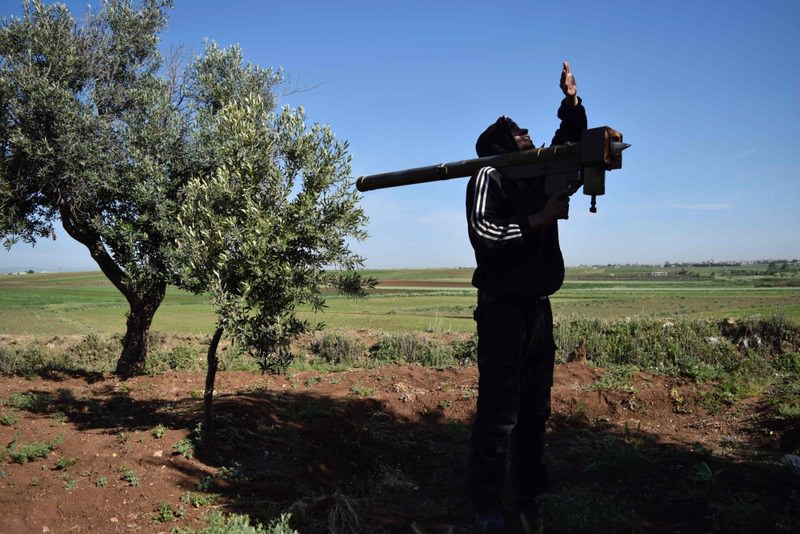 Man-portable air-defense systems (MANPADS), which are used by many armed organizations in several conflicts, have also reportedly been acquired by the PKK terrorist organization.
by Fatih Şemsettin Işık May 17, 2016 12:00 am

Reports revealed that the PKK, which is listed as a terrorist organization by Turkey, the U.S. and the EU, was somehow provided with many high-tech weapons for conflict with security forces, now poses a more dangerous threat to Turkey's national security

The civil war has transformed Syria into an arms market for terrorist groups that can access high-tech weapons to replace their rudimentary arsenal with the help of both foreign governments and tottering regimes like that of Syria's Bashar Assad. Reports say the PKK, a group recognized as a terrorist organization by the U.S. and the EU, is able to acquire man-portable air-defense systems (MANPADS) by gaining access to Syria through its local affiliate, the Democratic Union Party (PYD), and its armed People's Protection Units (YPG).

This development has raised the national security threat the PKK poses, since it provides the group with the ability to target Turkish aircraft, which it has not previously been able to do.

Under the guise of fighting DAESH, the PYD has been able to promote itself as a moderate opposition group in Syria, attracting U.S. support to Ankara's displeasure. Russia and the Syrian regime have also been cooperating with the group.

Ever since it ended the cease-fire with the Turkish state last July, the PKK has escalated terrorist attacks, sparking clashes across the southeast. By adopting the YPG's urban warfare strategy while its militants gained experience fighting along YPG fighters, the PKK has broadened its attacks to urban centers, creating serious damage to cities and towns.

However, the most significant change in the PKK's tactics has been the complete overhaul of its weapons arsenal, from AK-47s to MANPADS.

A PKK-linked media account recently posted a video purporting to show a terrorist shooting a Cobra attack helicopter with a MANPADS. The chief of the General Staff was quick to deny the claim, but did not comment on reports that the PKK had obtained the high-tech weapon, which experts believe will constrain the military's ability to conduct airstrikes on PKK targets.

Mete Yarar, a security expert who is also a former member of the Turkish Armed Forces (TSK), said the group, after having acquired the weapon, will now need the capability to provide the maintenance and training necessary for such technology.

Ankara's vocal opposition to Assad's continued leadership has caused the regime to provide open support to the PKK and PYD. A report by Arab21 News last July, citing a Syrian intelligence agency document, claimed Syrian Defense Minister Fahd Jassem al-Freij and Assad's special security adviser, Major Gen. Ali Mamlouk, met with a senior PKK leader on June 17. At the meeting in the northeastern Syrian province of Qamishli, the regime reportedly accepted all requests, including the right to set up training camps made by the PYD, the document indicated.

The amount of weapons in the PKK's armory showed that the group received them from some specific sources, Yarar argued, and said: "The PKK's use of high-tech weapons is nothing new."

Arda Mevlütoğlu, a defense industry expert, agreed: "The PKK has never been an organization with rudimentary tactics and basic equipment. It has always possessed relatively sophisticated equipment such as satellite phones, advanced radios, MANPADS such as SA-7 and effective explosive devices. Due to its ability to quickly adapt to political developments and form alliances, the PKK has never been short of weapons, training and intelligence sources."

He also said that the civil wars in Syria and Libya are very rich sources in terms of weapons and equipment for countless fractions, groups and organizations that have been active in various wars in the region.

"Syrian army bases and depots, for example, were full of almost all types of Russian-made MANPADS, anti-tank guided missiles [ATGMs] and explosives. Adding to the external traffic of supplies coming from countries that are feeding proxy wars, the PKK had to spend little or no effort to reach such complex weapons systems."

Yet Yarar said that the weapons, MANPADS and ATGMs in particular are strictly controlled by international intelligence organizations and it needs to be chased down and shared with the international community. He said this was especially true when it came to the PKK.

"All leaders can become targets with these weapons because they have the capability to destroy tanks, let alone armored vehicles."
RELATED TOPICS