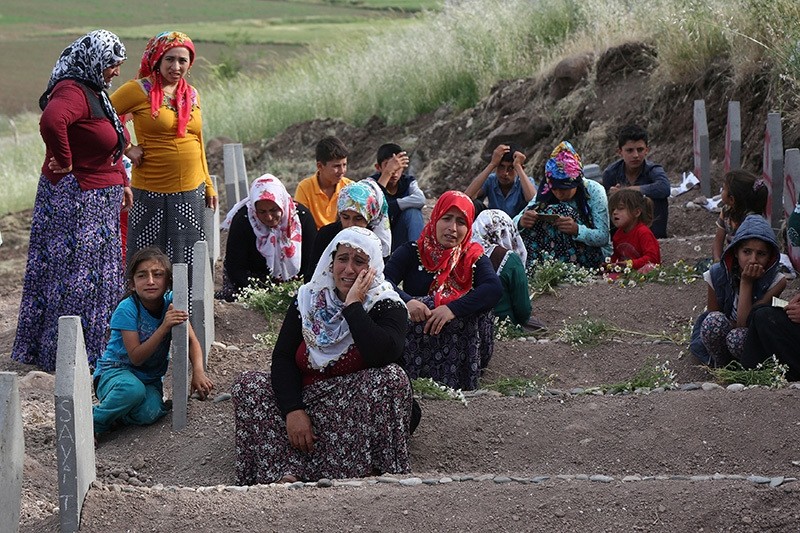 Family members of victims mourn at a cemetery in Du00fcru00fcmlu00fc village, the site of an explosion by PKK terrorists last week, near the southeastern city of Diyarbakir, Turkey May 19, 2016. (Reuters Photo)
by Anadolu Agency May 20, 2016 12:00 am

The deadly May 12 attack by the PKK terrorist organization on civilians that claimed 16 lives and injured 23 people in the Dürümlü region of Turkey's southeastern Diyarbakır province was unfortunately anything but an isolated event; it followed decades of bloody PKK attacks, leaving behind thousands of casualties and shattered lives.

Giving no one but itself the right to live, the bloody terrorist group has carried out most of its attacks on Kurdish people with the alleged aim of liberating them.

Since the group's earliest days, the PKK has been quick to attack its rivals, the regional unarmed Kurdish groups in Turkey's southeast.

Afterwards, targeting tribes in the region, the PKK massacred civilians just to get attention. The terrorist organization kills without discrimination -- young and old, women and men -- and then tells announces this to the world through their media organs.

The below timeline compiled using Anadolu Agency archives includes some of the civilian massacres committed by the terrorist organization PKK over the decades:

- Peçenek Massacre (July 8, 1987): A total of 16 people, including women and children, executed by firing squad

- Milan Massacre (August 18, 1987): The PKK kills 25 civilians, including 2 babies, just 3 and 6 months old. The terrorist group claims that those killed were "all" gang members

- Çetinkaya Store Massacre (Dec. 25, 1991): The PKK attacks a store in the Bakırköy district with Molotov cocktails, taking 11 lives, including 7 women and 1 child

- Anafartalar Attack (May 22, 2007): The PKK carries out a suicide bomb attack on Anafartalar Market. 9 people, including 1 Pakistani national, killed. More than 100 people are injured

- Batman - Seki Village Massacre (June 22, 1992): The PKK kills 10 people, including children, in a raid on the houses of 2 village guards. A newborn, 1 month old, was among the victims