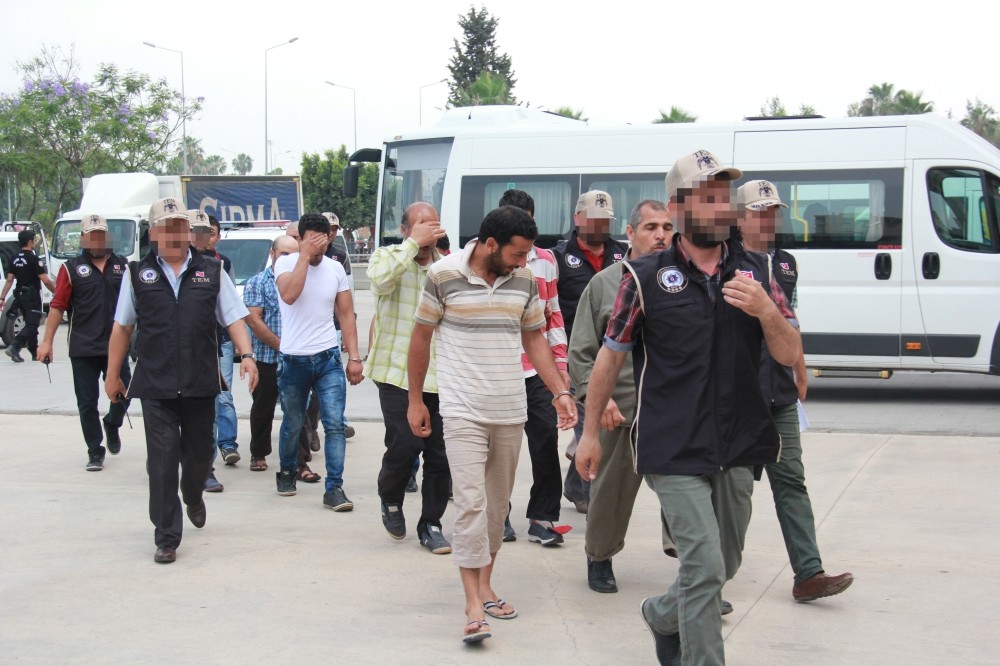 As the counterterrorism fight against the PKK and DAESH continues, seven YPG terrorists and nine DAESH terrorists who came from Syria were captured in the operations, which were launched in Antalya

Conducting an operation in a neighborhood in the Kumluca district, security forces detained seven Syrians working as agricultural laborers in greenhouses along with several documents on display that show connections to the PYD and YPG.

Several reports previously said that the PYD and YPG are in active cooperation with the PKK in its armed campaign in Turkey's southeast by providing militants and ammunition. Ankara has repeatedly voiced its concern over the PYD's affiliation with the PKK, which is recognized as a terrorist group by the EU and U.S.

Senior PKK leaders and PKK-linked political figures have previously uttered threats, indicating that western provinces will be targets as well. In an interview with the Times, senior PKK leader Cemil Bayık said: "Until not long ago, the war with the Turkish army was only in the mountains. Then it spread to towns and provinces. It will be everywhere now."

Pro-Kurdish Peoples' Democratic Party (HDP) Co-Chair Selahattin Demirtaş said in September: "My brothers who live in the west, if we are silent about Cizre [in the southeastern], if we do not pour into the streets, believe it or not, this fire will burn everywhere. Do you think that Bodrum is too far from Cizre. It is not. Everywhere is close."

In another operation in the same province on Thursday, nine Syrian nationals who are suspected DAESH members were detained and referred to court yesterday. Seven of them were captured in the town center and the remaining two were seized in the Serik district.

Recognizing DAESH as a terrorist organization on Oct. 10, 2013 in an official declaration, Turkey continues to fight DAESH both hitting targets in Syria with mortars and carrying out extensive investigations within the country.

In the last few days of May, 11 suspected DAESH terrorist in the southeastern Gaziantep province were captured. A suicide bomber blew himself up when police broke into the terrorist house. The suicide bomber, who was identified as Yunus Durmaz, one of the so-called emirs of the group, detonated his explosive belt after he noticed the counterterrorism unit was about to enter the house.

The suicide bomber, who fortunately only killed himself in the raid, was on the Red List of the Interior Ministry's Wanted Terrorists website, with a reward of TL 4 million ($1.3 million) for information leading to his capture. In the counterterrorism operation, Yunus Durmaz's wife, their two children and his brother Hacı Ali Durmaz were captured. Hacı Ali Durmaz, also a DAESH terrorist, was also on the wanted terrorists list with a reward of TL 1.5 million for information leading to his capture. The two brothers were linked to the Ankara double suicide bombing on Oct. 10, 2015, which left 109 dead and left over 500 wounded, the suicide bombing on Istanbul's İstiklal Avenue that left four dead and left 36 wounded and the May 1 car bombing of the police headquarters in Gaziantep that killed three.
RELATED TOPICS