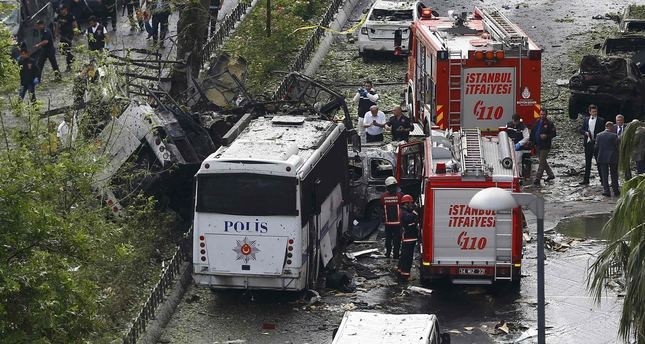 |Reuters Photo
by Daily Sabah with Reuters Jun 08, 2016 12:00 am
The White House condemned the terror attack on a police bus in Istanbul's Beyazıt district that killed 12 people and wounded 42.

"This horrific act is only the most recent of many terrorist attacks against Turkey. The United States stands together with Turkey, a NATO ally and valued partner, as we confront many challenges in the region," National Security Council spokesman Mark Stroh said in a statement.

An explosion hit Istanbul's Beyazıt district at the Vezneciler metro station as a riot police shuttle bus was passing on Tuesday morning, killing 12, injuring 42 others.

The explosion took place at the metro station close to Istanbul University at around 8:30 am.

A number of gunshots were reportedly heard after the explosion Istanbul's Beyazıt district, but it has not been confirmed whether there was a clash or not.

Turkey's state-run Anadolu news agency (AA) reported later on in the day that four suspects were detained in connection with the attack.