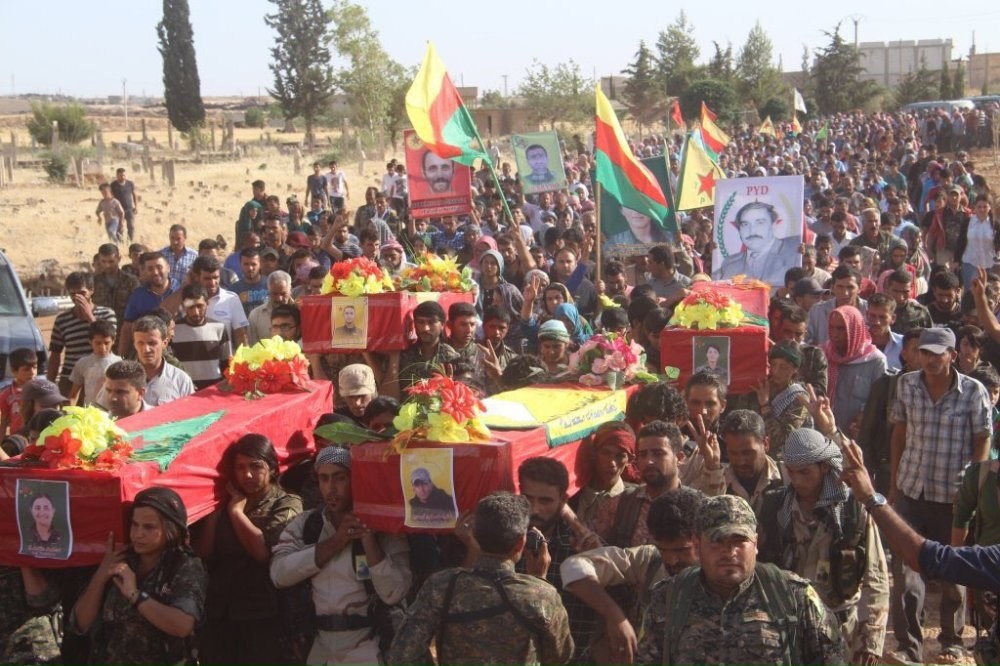 Even though the Obama administration has told Ankara that the YPG is not actively taking part in the battlefield in Manbij but providing logistical support, coffins of YPG militants arrive every day, disproving Washington's claims, leaving Ankara feeling betrayed by its close NATO ally

The PKK Syrian affiliate Democratic People's Party's (PYD) armed People's Protection Units (YPG) has suffered heavy daily losses in the U.S.-backed Manbij operation, which, according to the U.S., is being carried out by Arab-dominated Syrian Democratic Forces (SDF). YPG militants' coffins arrive in Kurdish towns every day, and funerals for the slain militants include PKK flags and banners of imprisoned PKK leader Abdullah Öcalan. A funeral ceremony was held in Kobani on Tuesday for four YPG militants who were killed in the Manbij operation. A large portrait of Öcalan was seen next to the coffins of the slain YPG militants. Two of them were reportedly killed by DAESH militants in the Manbij operation on June 12.

"Even though they try to hide it, it is the YPG that does the fighting in the Manbij operation," Kurtuluş Tayiz, a columnist for the Akşam daily who specializes in Kurdish affairs and the PKK, told Daily Sabah. "The [U.S.] administration is not sincere in its statements about the operation," he added.

According to local sources, Abu Layla, a top YPG commander, was shot dead in clashes with DAESH around Manbij last week. "Abu Layla was shot by a DAESH sniper in the village of Khafya Abu Qalqal on the outskirts of Manbij, while he was backing his fellows on Sunday," a YPG statement said.

Tayiz said that Washington has attempted to cover up the YPG's presence in the operation by putting the SDF forward. "It is said that there will not be a single YPG militant after the operations. We will see," he said. 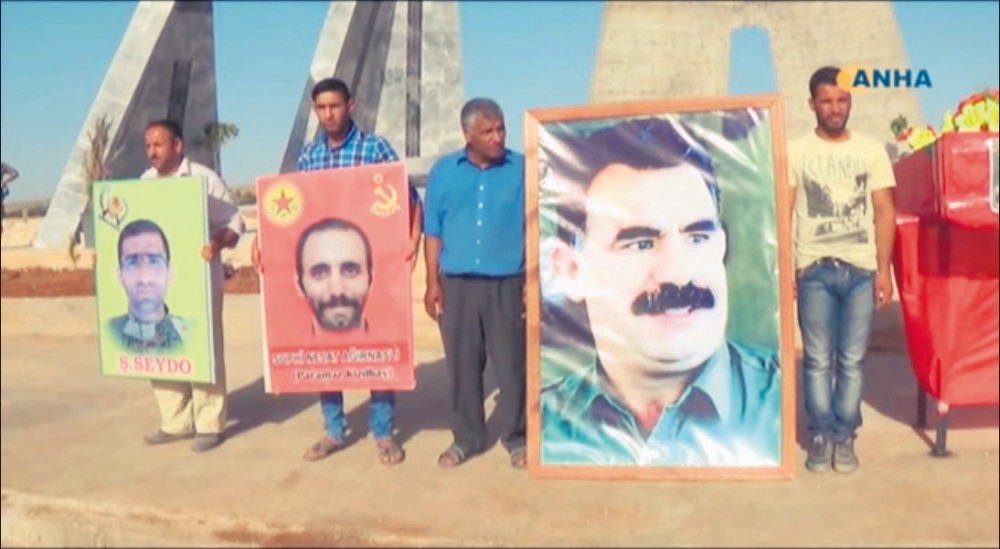 Even though Abu Layla was considered a fighter for the Free Syrian Army (FSA), the YPG said in the aforementioned statement that he is "one of the YPG's commanders."

The U.S. special presidential envoy for the anti-DAESH coalition, Brett McGurk, came under fire from Ankara for giving his condolences for Abu Layla's death.

"[Our] prayers are with FSA commander Abu Layla who lost his life in ongoing operations to liberate his hometown of Manbij from ISIL [DAESH] terrorists," McGurk said on his official Twitter account.

The SDF's heavy losses have pushed it to search for new recruits -- mostly teens. Sources from the Turkish-Syrian border said that the YPG was alarmed by President Recep Tayyip Erdoğan's statement that Turkey is ready to "take matters into its own hands if needed," and the group is trying to recruit people between the ages 18 and 60 in the northern Syrian town of Kobani, which the Democratic Union Party (PYD) currently controls.

Even though the U.S. administration insists that the YPG is not the driving force in the Manbij operation, Ankara remains suspicious and asserts that it does not welcome the group in Manbij once the operations have been concluded.

"Ankara is currently watching events closely. There will be the utmost distrust of the U.S. if the YPG does not leave the region once the operation is complete," Tayiz asserted.

"The main forces are Arab militants. That is what we were told," Erdoğan said in early June.

Underscoring that Ankara definitely has an action plan if the YPG does not leave Manbij, Tayiz said: "President Erdoğan's repeated statements and ultimatum regarding the issue give me the impression that Turkey will not look on but act."

Some 3,000 Arab fighters are taking part in the offensive, backed by around 500 Kurdish militia members, U.S. Central Command spokesman Colonel Patrick Ryder said previously, adding that U.S. special forces were working "at the command and control level" in the operation.

Washington's support for the YPG has troubled Turkish-U.S. relations to a great extent. McGurk paid a visit to Kobani and held talks in early February. Photos of McGurk's visit to Kobani surfaced on social media.

McGurk was seen meeting with former PKK fighters in Syria over the weekend. Polat Can, known as the spokesman and one of the founders of the YPG, shared a photo on his Twitter account showing him presenting a plaque to McGurk.
Last Update: Jun 16, 2016 2:59 pm
RELATED TOPICS