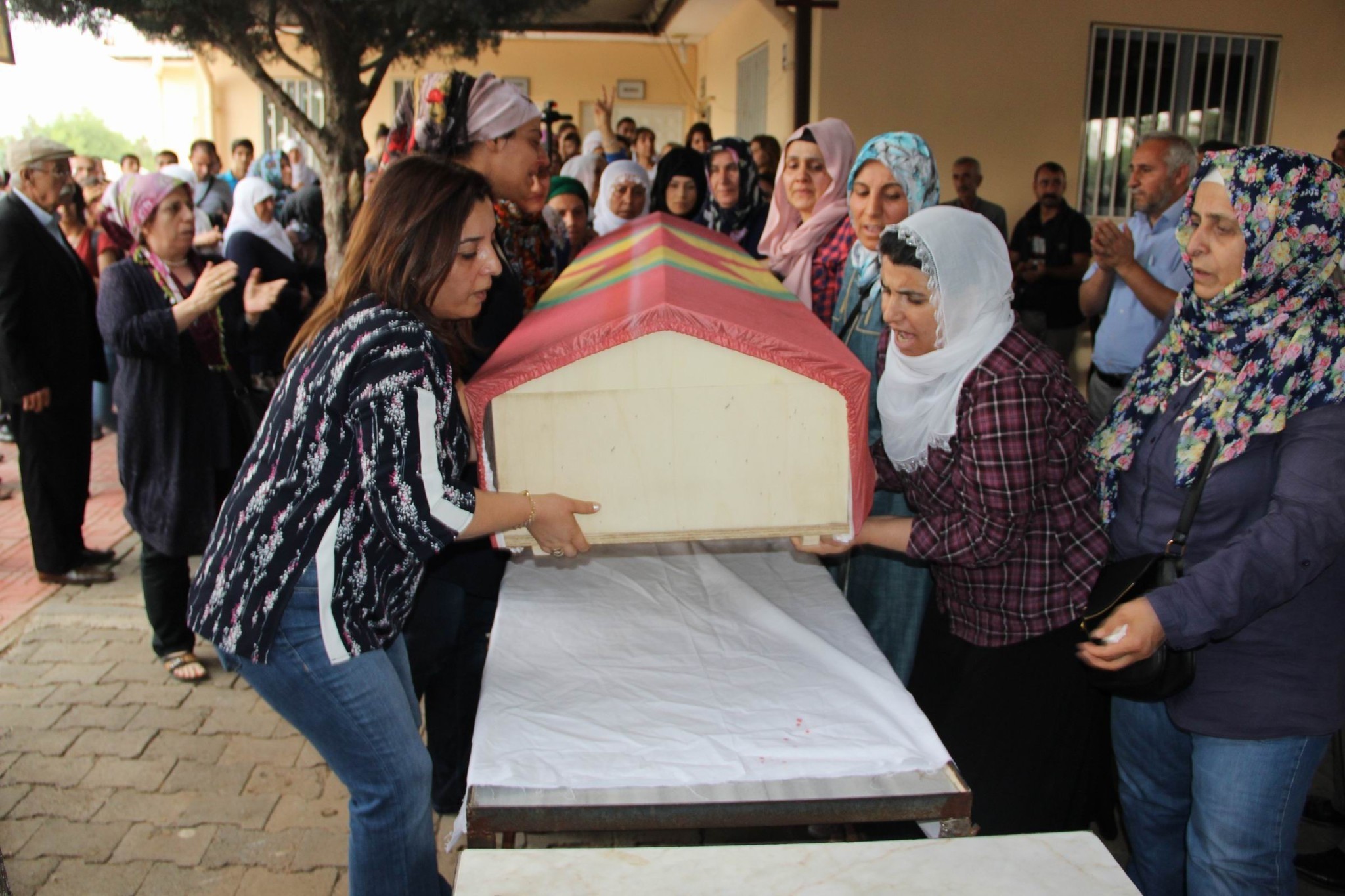 The funeral of the suicide bomber who carried out the attack in Istanbul was held in the southeastern province of Diyarbakır on Wednesday, amid PKK slogans and the PKK flag on the coffin in a display of force. Many figures from the pro-PKK Peoples' Democratic Party (HDP) and its regional affiliate Democratic Regions Party (DBP) attended the funeral. The terrorist, Eylem Yaşa, conducted the bombing that hit Vezneciler metro station in Istanbul's Fatih district close to Istanbul University as a riot police shuttle bus was passing on June 7.

The attack killed six police officers, six civilians and injured 51 others. A PKK splinter group, the Kurdistan Freedom Falcons (TAK), claimed responsibility for the attack. Under tight security, the funeral procession went to Yeniköy Cemetery with the funeral coach of the DBP-led Diyarbakır Metropolitan Municipality, as attendees chanted PKK slogans while carrying the coffin with the PKK flag draped over it. The DBP Kayapınar Municipality co-chairs, Fatma Arşimet and Mehmet Ali Aydın, Bağlar Municipality co-chairs, Eşref Güler and Birsen Kaya Akat, and the HDP Diyarbakır provincial organization co-chair, Gülşen Özer, attended the funeral with several other HDP and DBP members. Media previously reported that the DBP-administered Diyarbakır Municipality sent a funeral coach to Yaşa's funeral, and in April, the DBP-administered Batman Municipality sent a funeral coach for the funeral of three terrorists killed in the Sason district in the southeastern province.

Along with the terrorists' funeral, PKK supporters were also transported to the cemetery on municipal buses.

Elsewhere, two DBP aldermen were detained yesterday in Diyarbakır's Ergani province regarding the attack in Vezneciler. In the operation conducted on several addresses in the district, suspects identified with the initials M.N.P. and A.S.B were detained. Security sources said that the suspects will be transferred to Istanbul where the investigation is being conducted.

The Diyarbakır Municipality was previously at the center of criticism for Co-Chair Gültan Kışanak's statements glorifying the PKK's efforts for self-rule in southeastern provinces. "If the state detains my district mayor, then I also promulgate self-rule. The demand for self-rule of these people is a political demand," she said in a statement in August.

Southeastern municipalities administered by the DBP have been accused of aiding and abetting the PKK's urban war of digging trenches and establishing roadblocks to take control of cities. Heavy equipment belonging to the municipalities was also allegedly put at the disposal of the PKK, according to reports. The municipalities were criticized for not deploying firefighting teams to areas hit by PKK attacks.

An investigation of a PKK terrorist attack that took place in eastern Van province on Monday revealed that the vehicle used in the attack belonged to the Water and Sewerage Administration (VASKİ) in Van Municipality, which is ruled by the Democratic Regions Party (DBP), a regional affiliate of the pro-PKK Peoples' Democratic Party (HDP).

Security forces revealed that the vehicle was rented to Naci A., who works in VASKİ and captured wounded in the operation. Forces have also found two pistols and two grenades in the vehicle. While three PKK members were killed in the clashes after terrorists opened fire at police officers, a security source, who spoke to Anadolu Agency on condition of anonymity due to restrictions on talking to the media, said that a police officer was also injured.

In April, security forces revealed during operations that PKK terrorists used garbage trucks belonging to DBP-run municipalities for recruitment and carrying bombs in the Nusaybin district of southeastern Mardin province.

A report by the Prime Ministry in January questioned how these municipalities are spending state funds and said that funds may have been funneled to the PKK or at least toward support for its propaganda in the region. The report highlights a bloated rate of personnel employed by the municipalities, despite little investment in public services, raising suspicion of links between municipality personnel and the PKK.

Meanwhile, amid growing criticism of the pro-PKK Peoples' Democratic Party (HDP) and the potential of HDP deputies' being brought to trial due to alleged connections to the PKK, comparisons have been made with the now defunct Basque Batasuna party in Spain.

Batasuna was a Basque nationalist party based mainly in Spain that was banned in 2003 after a strongly contested court ruling declared that the party was financing the Euskadi Ta Askatasuna (ETA) with public money. Batasuna is included on the EU's list of terrorist organizations as a component of the ETA, like the PKK.

Batasuna lawyers took the case to the European Court of Human Rights (ECtHR). After a long legal inquiry, in July 2009 the ECtHR backed the Spanish rulings banning Batasuna and its proxies. The ECtHR said that disbanding the parties was a response "to a pressing social need" given their ties to the ETA.
Last Update: Jun 17, 2016 12:02 pm
RELATED TOPICS