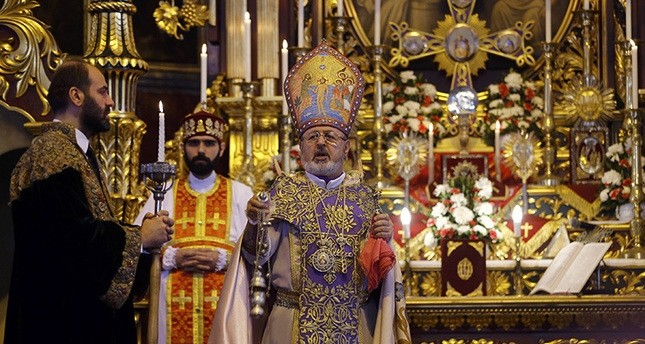 Archbishop Aram Ateu015fyan (C) holds a mass at Surp Asdvadzadzin Patriarchal Church in Istanbul
by Hasan Ay Jun 18, 2016 12:00 am
Acting patriarch of the Armenian Orthodox Church, Archbishop Aram Ateşyan, said that PKK terrorism has wrought serious damage to the St. Giragos Armenian Church and Armenian Catholic Church in the Sur district of the southeastern province of Diyarbakır and that he and his colleagues will appeal to the government for compensation.

Explaining that he visited Sur after the end of the security operations, he said he saw that the churches are out of use and need restoration. "Both mosques and churches were damaged since they are located there [where the clashes were]. There was a stove and mattresses in the churches. Apparently they [terrorists] stayed there for the night," he said

"Terrorism has no religion, sect or faith. It never enforces anybody's claims. Massacring people is a crime both against the state and before God. Dispossessing others people's right to live is not right. This is recognized as the greatest crime and sin in the three Abrahamic religions."

It was previously reported that the PKK dug ditches in the streets for and set up explosives in Sur, covering an area housing several historic mosques as well as Armenian Catholic and Protestant churches.

Priests from churches in eastern and southeastern provinces previously demanded the state protect their sanctuaries from the PKK in a meeting with then Prime Minister Ahmet Davutoğlu in February.

The PKK attacked historic Fatihpaşa Mosque in Diyarbakır was attacked in February, and also blocked firefighters from accessing to the blaze. The mosque, also known as Kurşunlu (leaded) because of its lead-covered dome, joined the long list of historic sites that have fallen victim to PKK clashes with security forces after they resumed activities in July following a two-and-a-half-year cease-fire. Built in the early 16th century, the mosque is the first Ottoman landmark in the city and was among the nonresidential places damaged in the renewed violence.
RELATED TOPICS