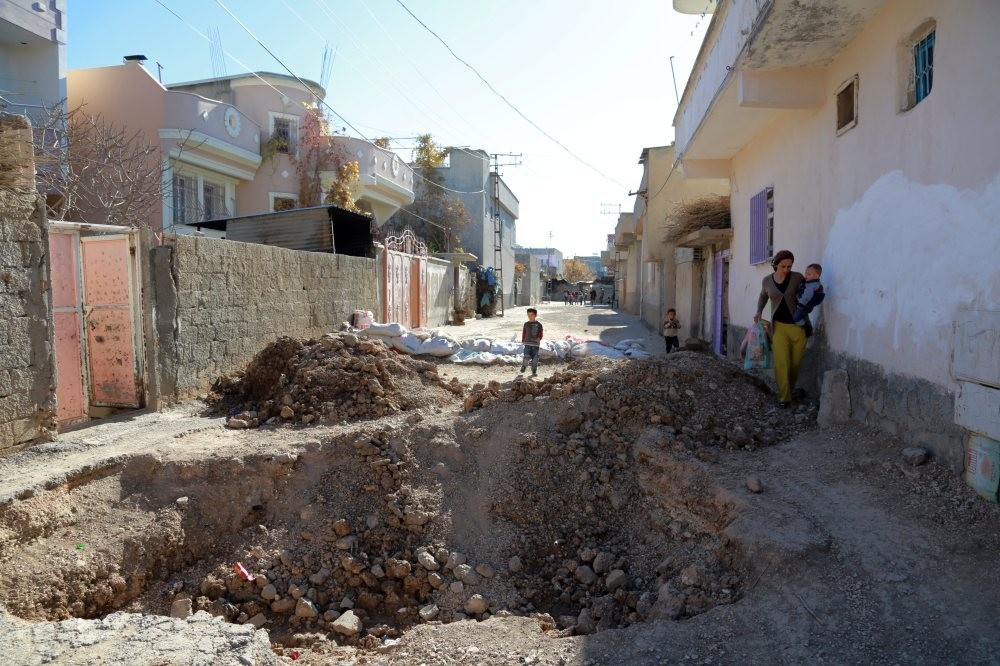 PKK terrorists dug scores of ditches and erected as many barricades in the southeast by using heavy equipment provided by HDP authorities. A big ditch in Nusaybin, Mardin is seen in the photo.
by daily sabah Jun 22, 2016 12:00 am

Fed up by various municipalities governed by the HDP and its regional affiliate DBP aiding and abetting the PKK, Prime Minister Yıldırım pledged to cut off state funding and asserted that the responsible will be brought to account

Municipalities in the eastern and southeastern parts of Turkey governed by members of the Peoples' Democratic Party (HDP) that aid and abet the PKK terrorist organization will be punished and refused federal funding, Prime Minister Binali Yıldırım vowed yesterday.

Speaking at a parliamentary group meeting for the ruling Justice and Development Party (AK Party), Yıldırım slammed the HDP and their regional affiliate, the Democratic Regions Party (DBP) for illegally transferring state-money to the PKK. "You get the money for the purposes of building infrastructure and providing social support, [but] you transfer these resources to the terrorist organization through various methods and by trickery," adding that those responsible will be penalized as soon as possible.

Yıldırım asserted that a bill regarding the issue will soon come to Parliament. "You offer logistical support to the mountains [referring to the havens of PKK terrorists] then complain door-to-door in Europe about Turkey," he added.

Southeastern municipalities administered by the DBP have been accused of aiding and abetting the PKK's urban war strategy. Heavy equipment belonging to the municipalities was allegedly provided to PKK terrorists, according to reports.

According to a Van Police Department report, 20 cell batteries, 100 kilograms of ammonium nitrate and other chemicals used for bomb making were found in a truck belonging to Van Municipality. This is one of many examples of municipal materials purchased with federal funding that have been exploited by terrorist organizations.

There have recently been claims that DBP municipalities provided assistance to the PKK by using municipal bulldozers to assist with digging trenches and establishing roadblocks, as part of the PKK strategy to claim control over cities. In Siirt province, a DBP municipality reportedly dug up roads to enable PKK terrorists to plant mines and then repaved it afterward so that the PKK could detonate the mines when military vehicles passed.

'TURKISH CITIZENS WILL VOTE, NOT EUROPEANS OR AMERICANS'

Yıldırım railed at the pro-PKK HDP for visiting "one European country after another," as well as the U.S., complaining about Turkey.

"The terror-supporting party wanders around Europe, the U.S. and Russia, complaining about Turkey. Americans will not vote, Europeans will not vote. You can get votes from Turkey. Go visit the citizens you received votes from and make yourselves understood," Yıldırım said, calling on the HDP to visit terror-stricken districts. "Citizens realized how they were deceived [by you]. We will not allow you to crush the hopes of our citizens or abuse them anymore."
RELATED TOPICS