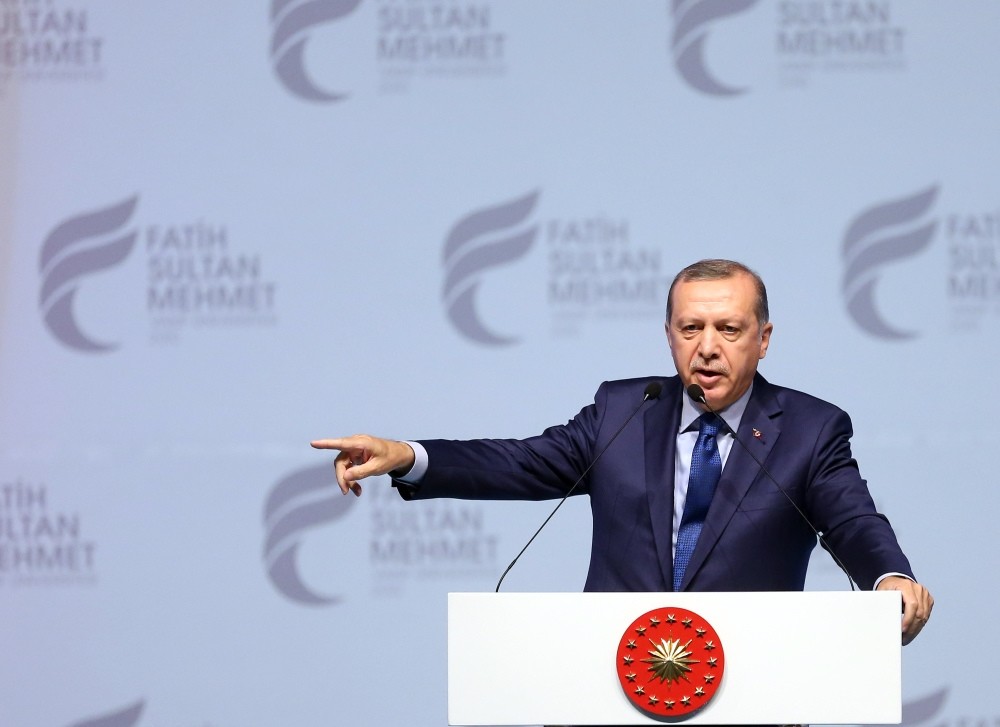 President Erdou011fan, speaking at the graduation ceremony for the Fatih Sultan Mehmet university on June 22, asserted that Turkey could hold a referendum to exit membership talks.
by Merve Aydoğan Jun 25, 2016 12:00 am

As the European Union loses one of its driving forces in a close Brexit referendum, Turkey has signaled that it also could bid farewell to the EU with a referendum to exit membership talks. Ankara expects a better atmosphere and attitude from the EU in the upcoming June 30 meeting

Amid uncertainty in the EU following Brexit, if the meeting between Turkish ministers, including Foreign Minister Çavuşoğlu, EU Minister Ömer Çelik, Finance Minister Naci Ağbal and Justice Minister Bekir Bozdağ, and EU officials on June 30 does not achieve the desired outcome, Turkey is determined to halt membership talks through a referendum. However, the referendum process requires certain steps, including a decision by Parliament enacting a law. While all referendums in Turkey have been conducted under the "law on submitting amendments to the Constitution to referendum" where it determines the schedule and procedure of the referendum, various countries refer to a referendum as a plebiscite where a "referendum" is held to change the constitution, and "plebiscite" is a direct vote by the electorate on an important public question, such as a change in the constitution.

Thus, the meeting in Brussels will be the major determining factor as to Turkey's next move in membership talks.

The four ministers and EU officials meet on June 30 to officially open Chapter 33, a series of talks on "financial and budgetary provisions" Turkey must meet to become a member. Chapter 33 will be the 16th chapter opened since Oct. 3, 2005, when the membership process started. Along with opening a new chapter, Ministers Çavuşoğlu and Çelik will meet with European Commission First Vice President Frans Timmermans, and Justice Minister Bozdağ will attend a quadripartite meeting regarding the visa liberalization process. However, Ankara and Brussels recently exchanged ultimatums over visa liberalization. Brussels requires that Ankara narrow the definition of terrorism in the country's anti-terrorism laws, and Erdoğan strongly rejected the criterion. "The country's anti-terrorism laws will not be sacrificed for visa liberalization," he said.

President Recep Tayyip Erdoğan and Foreign Minister Mevlüt Çavuşoğlu recently said there could be a referendum in the near future to exit membership talks. The statement by the president and foreign minister came shortly after the U.K. began the vote for a referendum to exit the EU by a 50 percent majority.

"You officially made a promise to Turkey in 1963. It's been 53 years. You are still wasting time. Why are you wasting time? … They are discriminating against Turkey. If the EU dismisses Turkey, we will go to the people. We'll ask if Turkey should continue membership talks with the EU," Erdoğan said on Wednesday, adding that he thinks the reason why the EU has been stalling Turkey's accession process is because Turkey has a large Muslim population.

Commenting on the U.K.'s decision to leave the bloc, Prime Minister Binali Yıldırım urged EU representatives on Friday to carefully read the U.K.'s decision, saying: "The EU must revise its future vision. We [Turkey] support the union's strong continuity towards the future. It is an important matter for regional stability and Europe's peace." Though Turkey deeply valued the membership process and described it as a strategic goal, the upcoming meeting in Brussels on June 30 is going to be the determining factor for not only visa liberalization but accession as well. In this respect, Minister Çavuşoğlu on Wednesday said: "If the EU dismisses Turkey, we will go to the people. We'll ask if Turkey should continue membership talks with the EU. [The referendum] is not blackmail or a threat. We want what is our right."

According to the Economic Development Foundation (İKV), 75.5 percent of the public support Turkey's EU accession, while 35.6 percent believe it will actually happen. In addition, an Objective Research Center (ORC) survey conducted in mid-March indicates that nearly 65 percent do not care whether Turkey is accepted into the EU or not.

Erdoğan railed at British Prime Minister David Cameron for his assertion that Turkey would not be able join the 27-nation bloc until the year 3000. "They are sending us signals that we cannot join the EU until the year 3000. Cameron, you did not used to talk like this when we were together. What happened now?" he said.

Millions of Britons began voted Thursday in a bitterly fought, knife-edge referendum that tore up the nation's EU membership and sparked the greatest emergency of the bloc's 60-year history.

A record 46.5 million voters were registered to decide Britain's future in the European Union, which was born out of a determination to unite in lasting peace after the carnage of two world wars.

"Turkey has done its part regarding the visa liberalization process. Our stance on refugees is clear. They are our dear guests. However, if they want to leave for Europe and the EU does not fulfill what is required, we will open our borders," Justice and Development Party's (AK Party) Group Deputy Chairman Bülent Turan told Daily Sabah in May.
Last Update: Jun 25, 2016 11:06 am
RELATED TOPICS