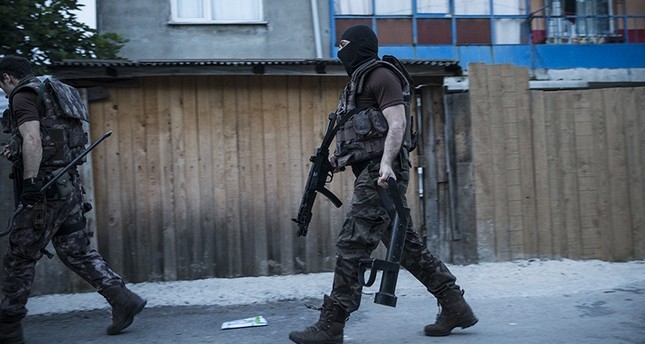 Turkish authorities are seeking two suspected Daesh terrorists thought to be linked to last week's Istanbul airport attack and are believed to be hiding near the border with Syria, Yeni Şafak daily reported on Wednesday.

Turkey has jailed a total of 30 suspects pending trial over the triple suicide bombing at Atatürk Airport, which killed 45 and wounded hundreds, the deadliest in a series of bombings this year in Turkey.

The attackers were Russian, Uzbek and Kyrgyz nationals, the paper said. President Tayyip Erdoğan also said Daesh militants from the former Soviet Union countries were behind the attack.

President Erdoğan also said that Daesh is a "dagger stabbed into the chest of Muslims", following a series of bombings in Saudi Arabia perpetrated by the terror group.

Daesh suspects are believed to be hiding in the woodlands of the Yayladağı district of Turkey's southern Hatay province and could be planning to change their appearance.

Turkish security forces have taken measures and precautions to prevent the Daesh terrorists from escaping into Syrian territory.

Other members of the same Daesh faction had fled to Kilis and Gaziantep further east and were hiding there, while militants from the Caucasus were using fake identities and were receiving support from Daesh cells, Yeni Şafak said.

The Istanbul bombing was followed by major attacks in Bangladesh, Iraq and Saudi Arabia in the past week, all apparently timed for the run-up to Eid al-Fitr, the holiday marking the end of the Ramadan holy fasting month.

"Using sacred Islam's name, exploiting it, this terrorist group which spills Muslim blood has gone as far as attacking the town where the mosque and blessed remains of our Prophet (Peace Be Upon Him) are located," Erdoğan said in a speech on Tuesday.

"Daesh is a dagger plunged into the chest of Muslims. Whoever gives support to this group, whether out of sectarian fanaticism or another motive, commits the same sin," he added.

In last week's attack, three bombers opened fire to create panic outside the airport before two of them got inside and blew themselves up. The third militant detonated his explosives outside at the entrance to the international arrivals terminal.

Russia and Turkey have been at odds over Moscow's support for Syrian regime led by Bashar Assad and Turkey's backing of the moderate opposition opposed to him, especially since last year when Turkey shot down a Russian warplane near the border for violating its airspace.

But recent weeks have seen a thaw in relations between the two countries, with both citing a need to bury their differences to fight the common foe: Daesh.

President Erdoğan sent a letter to Putin to express his regrets about the downing of the Russian warplane and expressed condolences to the family of the Russian pilot who was shot dead in the incident.

''In the letter, the president wrote that he 'would like to inform the family of the deceased Russian pilot that I share their pain and to offer my condolences to them. May they excuse us,' " the presidency quoted Erdoğan as saying in the letter, adding that he also urged Putin to restore the previous friendly relations between the two countries.