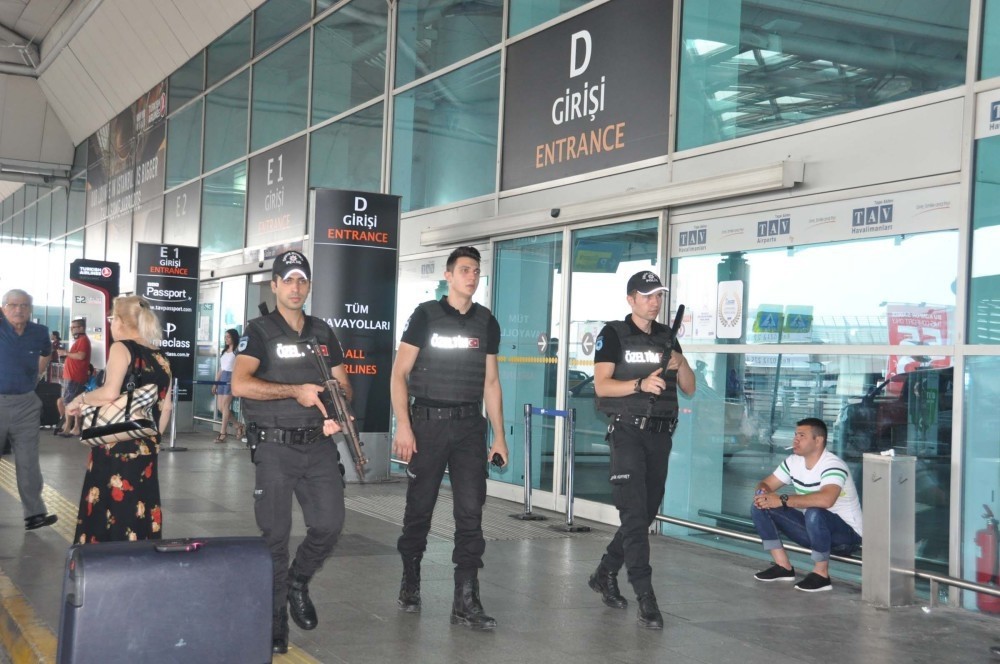 |DHA Photo
by Daily Sabah Jul 08, 2016 12:00 am
Turkish authorities are seeking two suspected DAESH terrorists thought to be linked to last week's attack at Istanbul's Atatürk International Airport, and who are believed to be hiding near the Syrian border, the Yeni Şafak daily reported on Wednesday.

Turkey has jailed 30 suspects pending trial over the triple suicide bombing at Atatürk Airport, which killed 45 and wounded hundreds, the deadliest in a series of bombings this year in Turkey.

The attackers were Russian, Uzbek and Kyrgyz nationals, the paper said. President Tayyip Erdoğan said DAESH militants from former Soviet republics were responsible for the attack.Erdoğan also said that DAESH is a "dagger stabbed into the chest of Muslims," following a series of bombings in Saudi Arabia perpetrated by the group.

DAESH suspects are believed to be hiding in the woodlands of the Yayladağı district in the southern Hatay province and could be planning to change their appearance to evade capture.

Security forces have taken measures and precautions to prevent DAESH terrorists from escaping to Syria.

Other members of the same DAESH faction had fled to Kilis and Gaziantep further east and were hiding there, while militants from the Caucasus are using fake identities and receiving support from DAESH cells, Yeni Şafak reported.

The Istanbul airport suicide bombings were followed by major attacks in Bangladesh, Iraq and Saudi Arabia in the past week, all apparently timed for the run-up to Eid al-Fitr, the holiday marking the end of Ramadan.

"Using Islam's sacred name, exploiting it, this terrorist group, which spills Muslim blood, has gone as far as attacking the town where the mosque and blessed remains of our Prophet are located," Erdoğan said in a speech on Tuesday."DAESH is a dagger plunged into the chest of Muslims. Whoever gives support to this group, whether out of sectarian fanaticism or another motive commits the same sin," he added.

Interior Minister Efkan Ala said on Tuesday that 15 of 30 people were taken into custody were foreigners from various countries. Yeni Şafak said all 11 of the foreign suspects jailed on Tuesday were Russian nationals. Four of the 13 suspects remanded in custody on Sunday were also foreign nationals.
RELATED TOPICS