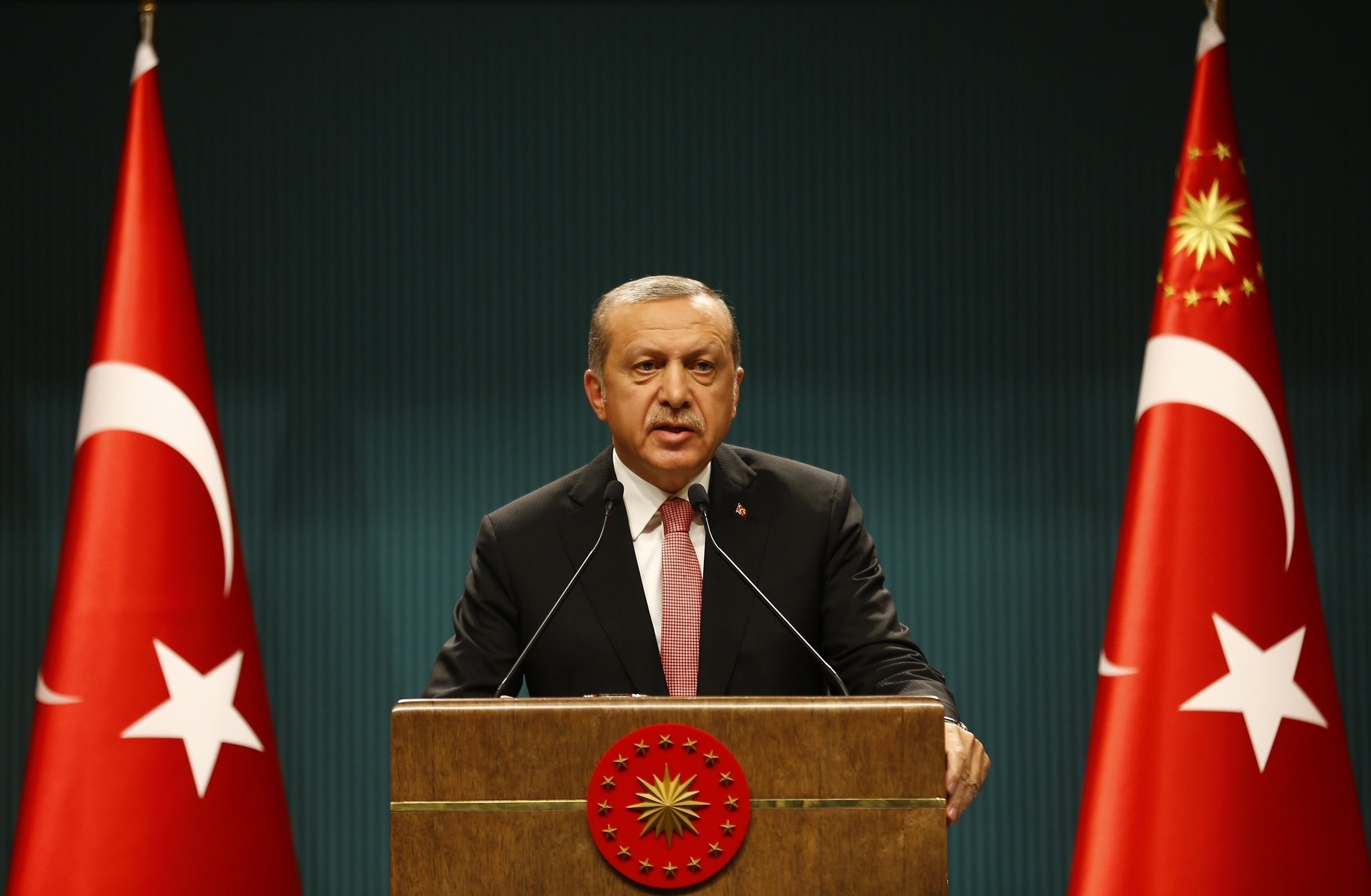 President Tayyip Erdogan speaks during a news conference following the National Security Council and cabinet meetings at the Presidential Palace in Ankara, Turkey, July 20, 2016. (REUTERS Photo)
by Daily Sabah with Agencies Jul 20, 2016 12:00 am

President Recep Tayyip Erdoğan announced Wednesday a nationwide three-month state of emergency after Friday's failed coup that killed 246 people and injured over 1,500 others. Early on Thursday, the decision was published in the Official Gazette and went into effect.

The Prime Ministry motion concerning the declaration of state of emergency was presented to Parliamentary Speaker's office on Thursday. The General Assembly will discuss and vote on the motion at 2:00 p.m. local time.

Making his announcement in a live television broadcast in front of government ministers after back-to-back National Security Council and Cabinet meetings in Ankara that lasted nearly five hours, Erdoğan announced that a state of emergency was being declared under Article 120 of the Turkish Constitution.

He underlined that the move aimed at combatting the growing terror threat in the country was fully in line with the constitution and did not violate the rule of law or basic freedoms of Turkish citizens.

"The purpose of the state of emergency is to most effectively and swiftly take steps necessary to eliminate the threat to democracy in our country, the rule of law, and the rights and freedom of our citizens," he said.

Under Article 120, in the event of serious indications of widespread acts of violence aimed at the destruction of the free democratic order, a state of emergency may be declared in one or more regions or throughout the country for a period not to exceed six months.

Speaking words of reassurance to the Turkish people, Erdoğan said: "Never be worried. There is nothing to worry about."

He said "it is out of the question" for the armed forces to seize power. "Quite the reverse, the authority and will of the [civilian] leaders will grow more in this process."

Erdoğan vowed that democracy and the rule of law would not be compromised throughout this state.

"We have never made compromises on democracy. And we will never make them," he said sternly.

The announcement comes after Erdoğan suggested in an interview with the Qatar-based Al-Jazeera TV network that coup plotters might still be active in the weeks ahead.

The state of emergency, which comes into force after it is published in Turkey's official gazette, will allow the president and cabinet to bypass parliament in passing new laws and to limit rights and freedoms as they deem necessary.

Erdoğan also said governors would receive increased powers under the state of emergency, adding that the Turkish armed forces would work in line with government orders.

"Europe does not have the right to criticize this decision," Erdoğan added, saying that the decision was taken to protect innocent civilians from possible attacks.

On the matter Erdoğan said: "S&P's decision to downgrade Turkey's note does not reflect the reality about Turkey's economy, it's a political move."

Right after the live broadcast, Erdoğan adressed citizens gathered in squares in Konya and other cities across the country in a televised speech, assuring that the state of emergency would not limit fundamental rights or freedoms and that this decision was not the same as declaring martial law.

On July 15, a small military junta linked to the Gülenist Terror Organization (FETÖ) attempted to topple the democratically elected government in Turkey and bring martial law. The attempt was prevented by military troops loyal to the government, along with police units and millions of Turkish citizens in favor of democracy. 246 people, consisting of mostly civilians, have been killed by pro-coup soldiers, while over 1,500 people were injured. Turkey's opposition parties have united against the coup attempt, condemning it in the harshest terms and underscoring their determination to preserve democracy and the rule of law in Turkey.