What would happen if a coup attempt took place in the US? 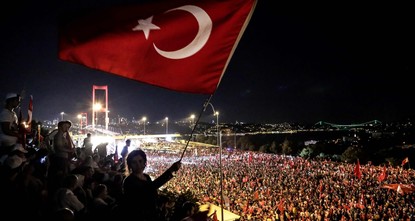 A video providing the viewers with a hypothetical scenario of the US experiencing a coup attempt, similar to the one on June 15 coup attempt in Turkey, has gone viral on social media.

The video, posted on the Youtube channel of BRKN News, features an actual footage from the coup plot orchestrated by the Gülenist Terror Organization (FETÖ) in Turkey and asking the viewers 'what would happen if the US Capitol in Washington DC is bombed while the US representatives are making a statement against the coup and the US military helicopters attack the hotel where the President is staying as he barely manages to escape only to be followed by two F-16 jets following him in the sky'.

The video also adapted the incidents happened in Turkey coup attempt into US perspective, calling on the Americans to imagine the Secretary of Defense is tortured by some of his own officers, tanks closing off the Brooklyn Bridge in New York City, as in Istanbul's Bosporus Bridge, where the infantry kills over 200 civilians.

The bombing of CIA and the Homeland Security, raids on networks such as Fox news and NBC were also in the video's hypothetical coup scenario in the US.

The video also suggested that Fethullah Gülen, the man behind the coup plot who resides in Pennsylvania, was soon going to be extradited to Turkey after the country asked from its ally for him to be returned.

The deadly coup attempt in Turkey began on late hours of July 15 when rogue elements within the Turkish military tried to overthrow the country's democratically-elected government, killing at least 246 people and injuring more than 2,100 others.

The government said the attempted coup was organized by followers of U.S.-based preacher Fetullah Gülen, who leads FETÖ.

Gülen is accused of a long-running campaign to overthrow the state through infiltrating into Turkish institutions, particularly the military, police and judiciary, forming a 'parallel state'.