All parties stand united against Gülenist threats to democracy 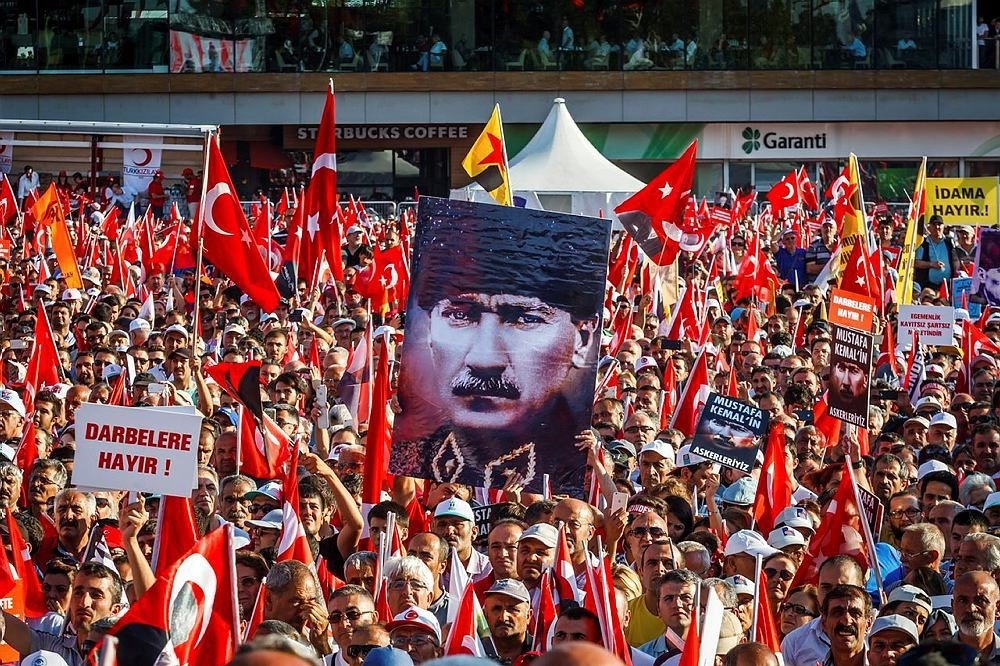 CHP supporters gather in Taksim square for the democracy meeting (Photo by Recai Ku00f6mu00fcr)
by Fatih Şemsettin Işık Jul 24, 2016 12:00 am

The people and their representatives passed a democracy test on the night of July 15 when faced with a coup attempt by a Gülenist cabal. Sunday’s democracy rally in Taksim provided an occasion to display the political unity against threats to democracy

Opposition parties have shown unity in denouncing the July 15 coup attempt led by the Gülenist Terror Organization (FETÖ) and have declared support for the democratically elected government and the Turkish state against the plotters. Sunday's rally at Istanbul's central Taksim Square (above), organized by the Republican People's Party (CHP), was the first substantial public gathering that brought together members of different political parties in a show of unity for democracy. All opposition parties in Parliament – the CHP, Nationalist Movement Party (MHP) and Peoples' Democratic Party (HDP) – made supportive statements to the ruling Justice and Development Party (AK Party) government against the Gülenists' coup attempt. Speaking at the rally, CHP Chairman Kemal Kılıçdaroğlu said the coup attempt was an attack on parliamentary democracy and condemned those who instigated it, both in Turkey and abroad.

All four parties in Parliament showed unity against the junta on the night of the coup attempt. Speaking to NTV yesterday, CHP Group Deputy Chairman Engin Altay said that the coup attempt targeted parliamentary democracy in Turkey, not only the ruling AK Party and President Erdoğan. Speaking on a live broadcasty, CHP Istanbul deputy İlhan Cihaner said Turkey has gone through what is probably the bloodiest coup attempt in its history and the only way to deal with this problem is to embrace democracy. "The statements from AK Party officials are promising. Hopefully this political atmosphere continues. If tomorrow's meeting [President Erdoğan's meeting with the prime minister, Kılıçdaroğlu and Bahçeli] puts a perspective to overcome this crisis, we will handle this issue with ease."

The four parties in Parliament have showed unity against the junta on the night of the coup attempt. While it was precipitating, the Parliament compound was bombed seven times, wounding several police officers and parliamentary officials. Coup forces bombed Parliament while Justice Minister Bekir Bozdağ was holding the floor. After the second strike, which caused significant damage to the building, deputies went down to the shelter, as their first destination, the boiler room, was found to be insecure.

"They have maintained their stance for nine days. We think that stance of the three [opposition] parties is important."

Kandemir said that none of the parties consider the issue through political interests is also important, and that it should continue.

"All political parties have passed this test. They have raised their voices all together against the coup attempt for the first time in history. It is significant for manifesting the level of progress that democracy in Turkey has made."

Later, in a written statement, Bahçeli said an attempt at suspending democracy and ignoring the national will was a big mistake.

"The price Turkey will pay will be considerably high in the event of civil war in Turkey. As Turks, we need to be distant from all kinds of interventions that risk our national unity and integrity," he said.

In addition, CHP Chairman Kemal Kılıçdaroğlu said early Saturday that the community should have a unified reaction to every coup attempt.

"This country was wracked with coups. We do not want to go through the same troubles. We'll protect our republic and democracy [and] keep our commitment to the free will of our citizens."

In a joint written statement, HDP co-chairs Selahattin Demirtaş and Figen Yüksekdağ said no one can replace the national will. "The HDP takes a stance against every coup in every condition," the statement said.

"There is no way besides protecting democratic politics," it added.

Speaking to Daily Sabah, HDP Diyarbakır deputy Altan Tan said everyone in Turkey stood against the coup attempt and a new process to maintain this unity is necessary.

"The ruling party should start a restoration process by discussing and negotiating with the opposition from now on," he said.

"I want all parties to be able to follow a common stance with each positive development. Turkey does not need that much tension," he said.
Last Update: Jul 24, 2016 9:33 pm
RELATED TOPICS