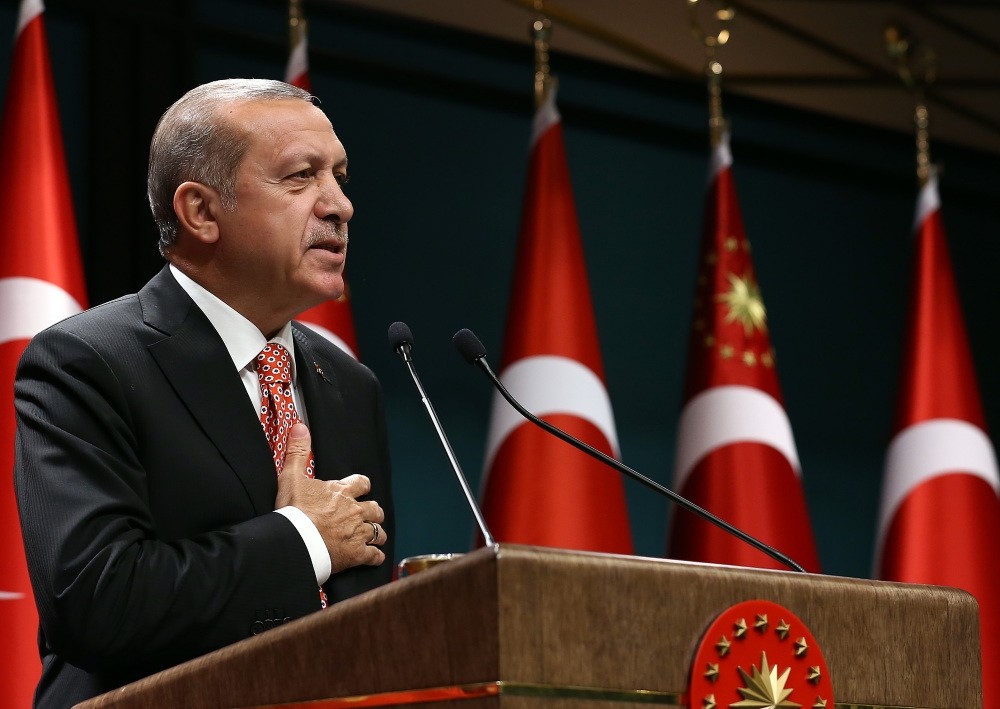 President Erdoğan vowed to continue the fight against FETÖ terrorists who have infiltrated public institutions, saying that with the regulations established under the three-month state of emergency will prevent re-infiltration by FETÖ

President Recep Tayyip Erdoğan said yesterday that members of the Gülenist Terror Organization (FETÖ) dismissed from public institutions will no longer be able to work in their previous places of employment and that the government is determined to take strict measures to prevent any future infiltration they may attempt of the public sector.

Speaking to citizens in a live broadcast, Erdoğan said that initial decrees have been signed in the scope of the declared three-month state of emergency and that FETÖ members are being dismissed from public institutions. FETÖ-linked institutions, schools, dormitories and foundations were also shut down.

"Those who were dismissed from public institutions for having links with this terrorist organization [FETÖ] will never be officers again. A motion for staying of execution will not be granted as well. We are continuing to take necessary steps gradually in order to erase FETÖ from all institutions in our country," he said.

Anadolu Agency (AA) reported that 45,484 FETÖ-linked officers have been dismissed from public institutions, including the Prime Ministry, the Ministry of Economy, the Turkish Statistical Institute (TurkStat) and the General Directorate of State Airports Authority (DHMİ) since the July 15 coup attempt.

The president stressed that people united against the coup plotters in a way that resembled the unity of the country in the Independence War and said "On the night of July 15, there was no Alevi-Sunni [discrimination], Turk-Kurd, ruling-opposition party, or rich-poor."

Putschists wanted top general to talk with GülenIn an interview with France 24 late on Friday, Erdoğan said the coup plotters who took Chief of General Staff General Hulusi Akar hostage in the coup attempt wanted to make him talk with Gülen. "They attempted to perform a coup under instructions from Pennsylvania [Gülen's residence]. Those who took Akar captive dared to say, 'Let us make you talk with our leader, Gülen.' Can we just stand idle regarding such practices?"

Turkish Habertürk daily reported yesterday that the soldier who made this offer was Mehmet Partigöç, a brigadier general in the Chief of General Staff.

'You don't change horses midstream'Erdoğan told Hakan Fidan, the head of Turkey's National Intelligence Organization (MİT), that the intelligence organization did not perform well during the failed coup attempt.

Speaking to France 24 after the meeting with Fidan, Erdoğan said that he did not ask Fidan or Chief of Staff Gen. Hulusi Akar to resign and affirmed that they will continue their duties. Erdoğan said that Fidan and Akar told him it was the president's decision whether or not they should resign. "You don't change horses midstream," he said, emphasizing that Turkey is still in a transitional period after the attempted coup. "It is very clear that there were significant gaps and deficiencies in our intelligence; there is no point in trying to hide or deny it," Erdoğan said in another interview on Thursday. He further stated that he put in a call but could not reach Fidan during the attempted coup.
Last Update: Jul 25, 2016 1:09 am
RELATED TOPICS