Coup leader Gülen must be extradited to Turkey for trial: Presidential Spokesman Kalın 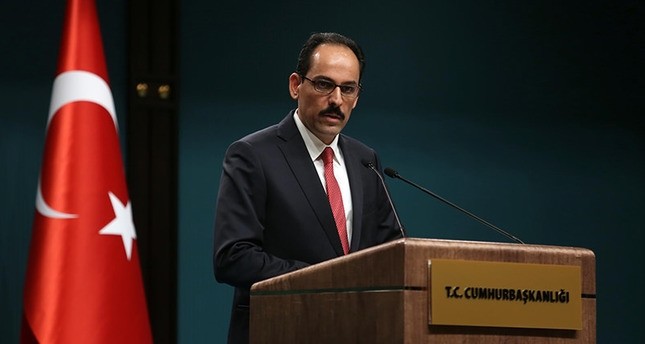 Presidential spokesman İbrahim Kalın penned an article for U.S. daily The New York Times in which he urged the U.S. authorities to immediately take action to extradite fugitive preacher Fethullah Gülen, who lives in rural Pennsylvania and runs a criminal network, to Turkey for a fair trial for his role in the July 15 failed coup attempt.

"Testimony and evidence obtained from coup plotters point to Fethullah Gülen as the leader of the coup attempt, which was planned and staged by his followers within the army. Levent Turkkan, the aide-de-camp to the chief of staff for Turkish armed forces, Gen. Hulusi Akar, confessed to being a member of the Gülenist group after he was arrested, adding that he executed orders from his Gülenist superiors," he said in the article published on Monday.

"Generals leading the coup also urged General Akar to speak to Fethullah Gülen, who runs a covert empire from his mansion in rural Pennsylvania, hoping to persuade him to join in their rebellion, according to General Akar."

Mentioning the secretive nature of the Gülenist Terror Organization/Parallel State Structure (FETÖ/PDY), he said that Gülenists present themselves as peaceful educators even though they have always had a dark side as "a religious cult." Kalın said this organization had been infiltrating the Turkish judiciary and security forces since the 1980s and had manipulated the system to their advantage. He also touched upon the Gülenists' other criminal acts, such as fabricating evidence, engaging in illegal wiretapping and leaking government documents to defame anyone against them.

Urging the U.S. authorities to quickly extradite the fugitive preacher, he said: "The United States should extradite Fethullah Gülen, a Turkish citizen, to Turkey, as is allowed under an existing treaty. Turkey has already provided a number of legal documents to American authorities and will send more as further evidence is collected. The United States should not let this man exploit its laws to avoid facing a fair and legitimate accounting in Turkey."

Touching upon the baseless claim that the coup attempt was staged by President Recep Tayyip Erdoğan to gain more power, he said that this claim was "no more credible than the laughable claim that the 9/11 attacks were orchestrated by the United States."

At least 2,839 pro-coup members of the military, including 29 colonels and over 40 generals, have been detained across Turkey, the Interior Ministry said Saturday.

Turkey's top judicial body, the Supreme Board of Judges and Prosecutors (HSYK), also ordered the detention of 2,745 Gülen-linked judges and prosecutors on Saturday while two members of the Constitutional Court were detained for involvement in the coup attempt.

As a result of the attempted coup, 264 people were killed, including police officers and civilians, while over 2.000 others were injured. Some 24 pro-coup figures were also killed.