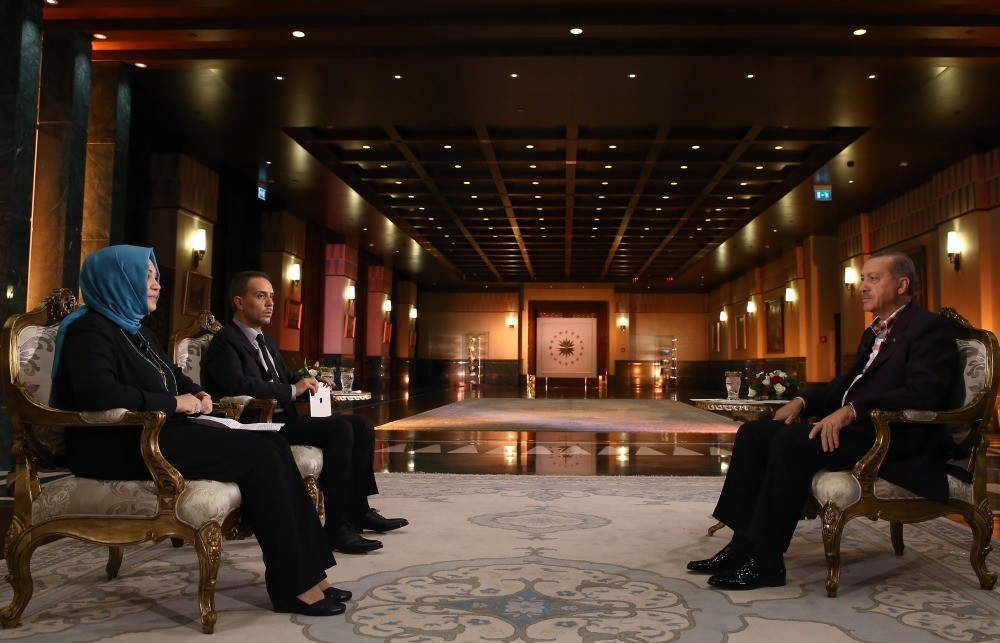 Daily Sabah columnists Hilal Kaplan and Melih Altu0131nok with President Erdou011fan at the Presidential Complex.
by Daily Sabah Aug 01, 2016 12:00 am

Giving his first interview on Turkish TV since the July 15 Gülenist coup attempt, President Erdoğan said the FETÖ has the most extensive terrorist organization network and acts jointly with DAESH, the PKK and the PYD

The Gülenist Terror Organization (FETÖ) collaborates with the PKK, its Syrian offshoot the PYD and DAESH, and they are all the same, President Recep Tayyip Erdoğan said late on Saturday.

Speaking in an interview on a live broadcast by ATV and A Haber channels, Erdoğan said that FETÖ, which attempted to stage a coup on July 15, killing well over 200 citizens, is as dangerous as the PKK, the PYD and DAESH.

"They [FETÖ] are in joint action with the PKK, the PYD and DAESH. The next goal is invasion [of Turkey]. We should see this. If there are citizens setting their hearts on [FETÖ], they should check themselves," he said.

He also touched upon the fight against PKK terrorists in Turkey's southeast and said that the country will continue counter-terror operations with determination. He added that the opposition Republican People's Party (CHP) and the Nationalist Movement Party (MHP) have expressed their support for Turkey's fight against terrorists.

Erdoğan noted that the chief of General Staff and the National Intelligence Organization (MİT) would report directly to the presidency if Turkey passes a constitutional package.

Additionally, all military hospitals will be under the Ministry of Health, after it was discovered that Gülenist agents within military hospitals exempted many students who qualified to serve, and falsified medical reports to ensure specific students got into military schools and others did not.

The president also criticized the indifference of world powers to Turkish people's commitment to protect democracy, saying that no country bothered to send a minister or official to see the situation in Turkey and instead chose to express "concern" over the situation after the coup attempt. Erdoğan said that although many countries called to congratulate Turkey for thwarting the coup attempt, they said they were concerned about the detention of soldiers and prosecutors affiliated with FETÖ.

Erdoğan noted that he does not find it ethical for countries to call Turkey to congratulate it for thwarting the coup attempt, but not sincerely support it when Turkey tries to fight those who attempted to bring down the democratically elected government.

"The phone calls you make – regarding the failed coup attempt – have no value if you are not honest," Erdoğan added.

The president continued by saying that Turkey has always responded to the U.S.'s extradition requests, but the latter refuses to extradite the leader of FETÖ, Fethullah Gülen, who has been living there since 1999 and whose agents have infiltrated Turkish state institutions to topple the democratically elected government.

President Erdoğan has decided to withdraw all court cases he previously opened against the chairs of opposition parties, as tentative signs of solidarity among rival political factions continue after the recent failed Gülenist coup attempt on July 15. Erdoğan added that he will do it for once.
RELATED TOPICS