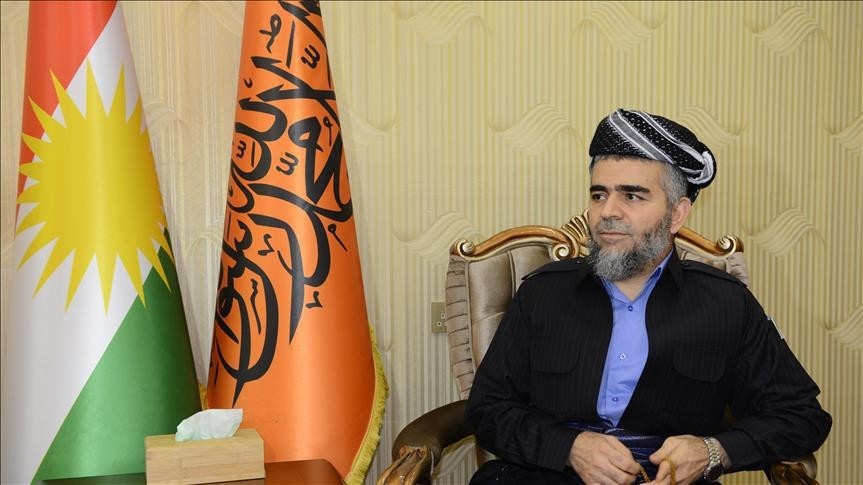 Ali Bapir, secretary-general of the Kurdistan Islamic Group Party, which functions in northern Iraq's semi-autonomous Kurdish region, praised the role of the Turkish people in foiling a July 15 coup attempt by the Gülenist Terror Organization, FETÖ.

In a Thursday interview with Anadolu Agency, Bapir pointed out that Turkey's ruling Justice and Development (AK) Party had come to power via democratic elections.

Stressing that the will of the people must be respected, he denounced both last month's failed coup bid in Turkey and Egypt's successful 2013 military coup that brought President Abdel Fattah al-Sisi to power.

He went on to assert that the coup bid in Turkey was initially welcomed in the Kurdish region among certain "secularist" circles and by officials within Syria's Assad regime.

He added, however, that most Kurds had been relieved when they heard of the coup plot's failure.

"As long as there is a government like [the AK Party], nobody should be happy about coups," he said. "When we look back [at history], we can see the damage coups cause."

"They [the coup plotters] wanted to spark a civil war by abducting [PKK leader Abdullah] Ocalan, who remains held on Imrali Island," Bapir said, adding that the putschists had hoped to ignite further conflict between Turks and Kurds.

"The main factor that prevented the coup was [Turkish President Recep Tayyip] Erdoğan's call to the people to hit the streets," Bapir said.

He added: "The era of ruling a country with tanks and guns is over."

Turkey's July 15 coup attempt -- which left 238 martyrs in its wake -- was believed to have been orchestrated by the FETO terrorist organization, led by U.S.-based preacher Fetullah Gulen. An Istanbul court on Thursday issued an arrest warrant for the self-styled preacher.

Gulen and his followers have long been accused of infiltrating Turkish state institutions -- especially the military, police apparatus and judiciary -- with the aim of creating a "parallel state".

When asked about the Kurdish region's future following the anticipated defeat of Daesh, Bapir said the West's relations with the region were contingent on the fight against the terrorist group.

"The reason western representatives come to Erbil [the Kurdish region's administrative capital] isn't because they love us," he said. "It's because we fight Daesh on their behalf."

He went on to cite a recent meeting between Brett McGurk, Washington's special anti-Daesh envoy, and a Kurdish political party, during which McGurk had stressed U.S. support for Kurdish Regional Government (KRG) President Masoud Barzani -- at least until Daesh was defeated in the region.

"This statement shows that the [western] visits to Erbil aren't strategic but technical; that relations are temporary and contingent on [the fight against] Daesh," Bapir said.

As for the possibility of holding a popular referendum on the Kurdish region's independence from Baghdad, Bapir said "many steps" must be taken before this could be considered.

An independent state, he said, "requires a strong economy, a politically-aware public, a central authority, and sophisticated diplomatic relations".

As it currently stands, all these factors are absent, he added, going on to stress that an independent Kurdish state "must not come at the cost of enmity with Turkey, Iran, Syria or the international powers".