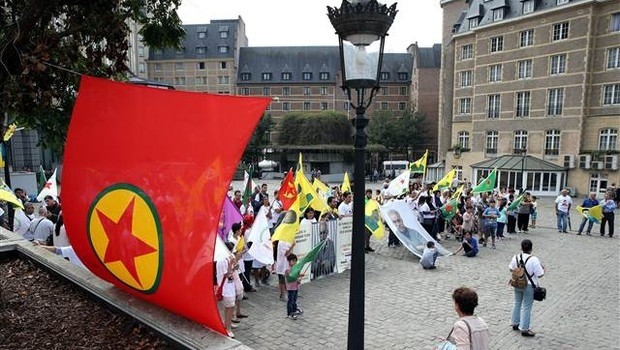 Belgium once again proved a safe haven for terrorist organizations as it allowed PKK supporters to stage a demonstration in central Brussels. PKK symphatizers, gathering in Spanjeplein Square, celebrated the group's first attack against Turkey

PKK supporters gathered in Brussels' Spanjeplein Square on Sunday to celebrate the anniversary of its first attack against the Turkish state on Aug. 15, 1984.

Despite Belgium and the European Union considering the group a terrorist organization, local authorities did nothing to prevent the demonstration or to disperse the PKK supporters.

At the rally, PKK banners were hung on lamp posts and supporters carried posters of the group's imprisoned leader, Abdullah Öcalan.

PKK sympathizers at the demonstration demanded that Öcalan be freed. 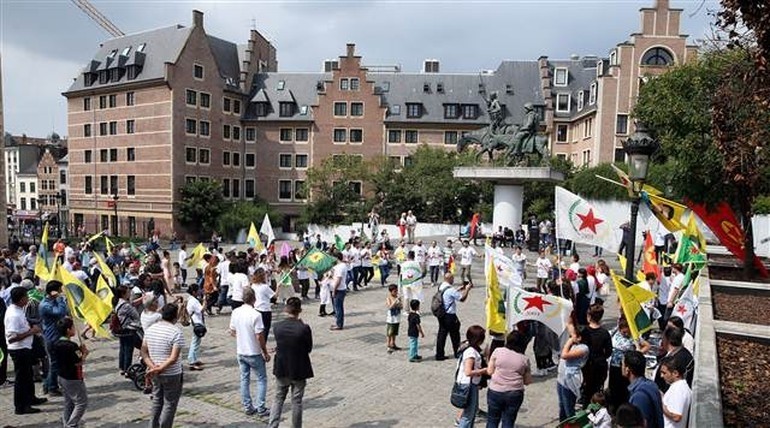 Brussels police allowed the group to stage the demonstration even though Belgian officials said it was "unauthorized."

The Aug, 15 1984 PKK attacks led by Mahsum Korkmaz marked the start of the PKK's war against the Turkish state. PKK terrorists attacked the gendarmerie station in the Eruh district of southeastern Siirt province and killed one gendarme and injured six soldiers and three civilians. Simultaneously, PKK forces attacked an open-air gendarmerie facility, officers' housing and a gendarmerie station in the Şemdinli district of Hakkari, killing two police officers and injuring one police officer and a soldier.

Belgium has come under fire from Turkish authorities before for their tolerance of allowing PKK demonstrations in the country.

Fehriye Erdal, a member of the Revolutionary People's Liberation Party Front (DHKP-C), who was involved in the killing of a prominent Turkish businessman in 1996, had fled to Belgium after the murder and was not extradited to Turkey despite Ankara's demands. The country also does not recognize her as a terrorist and describes her as a "gang member."

Zübeyir Aydar, a senior PKK member who the U.S. Treasury Department has designated an international drug trafficker, was arrested in Belgium in 2010, but released three weeks later.

The PKK broke two-and-a-half year unilateral cease-fire with the Turkish state in July 2015, and resumed its armed campaign, which has seen civilians targeted. Hundreds of police, military officers and civilians were killed in PKK attacks while the Turkish military has been conducting a campaign both in Turkey and in the mountainous regions of Northern Iraq where senior PKK cadres are headquartered. Airstrikes in Northern Iraq as well as operations in southeastern and eastern Turkey have killed thousands of militants.

The PKK is recognized as a terrorist organization by the U.S., EU and Turkey. Formed in 1978, the group had been fighting the Turkish state for an independent Kurdistan until the early 2000s. The group then shifted its goal to autonomy in the predominately Kurdish regions of Turkey.