PM: Assad has no future in Syria, presence in transition ‘minor detail’ 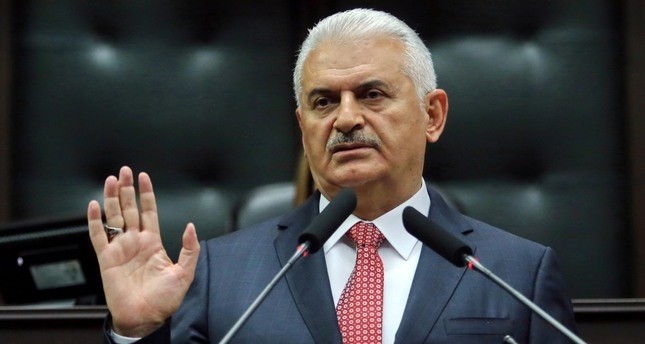 Prime Minister Binali Yıldırım told Daily Sabah in a meeting with the representatives of foreign media institutions on Saturday that the primary goal for the Syrian issue is stopping the bloodshed in the country, describing Syrian leader Bashar Assad's role in Syria's transition as a "minor detail." The prime minister did not define Turkey's stance as a "shift" in foreign policy on Syria, pointing to the importance of stopping the mass number of casualties as quickly as possible rather than the fate of Assad.

"One thing is for sure, that Assad cannot be part of Syria's future, as he is not a unifying element for the Syrian people. This is not a matter of debate. On the other hand, our priority is to prevent the loss of life, stopping all bloodshed in the country. Any other issues are just details," he said.

Yıldırım went on to say that countries in the region including Turkey, Saudi Arabia and Iran will be more effective in resolving the Syrian crisis: "The only divergence in Turkey and Iran [in terms of our stance on Syria] is the role Assad will play in the future, which is a small detail, not the substance."

Emphasizing Turkey's core position on resolving the Syrian crisis, Yıldırım said Turkey has a pioneering role and its cooperation with the U.S., Russia, Iran and Saudi Arabia will be key to ending the war in Syria. "Turkey will take a more active role in addressing the conflict in Syria in the next six months to prevent the war-torn country from being divided along ethnic lines," he said.

Syria's more than five-year conflict has taken on an ethnic dimension, with Kurdish groups carving out their own regions and periodically battling groups from Syria's Arab majority whose priority is to get rid of Assad.

Yıldırım also said Russia understands Turkey's sensitivity on the Democratic Union Party (PYD), reiterating that Turkey has no tolerance for the group, which has links with the PKK.

His comments came as the PKK terror organization increased its bomb attacks targeting police and military. More than a dozen people were killed in attacks this week.

He added that they will discuss the latest situation regarding Syria with U.S. Vice President Joe Biden, who will pay a visit to Turkey on Aug. 24.

Turkey fears the strengthening of Kurdish terrorist groups in Syria will further embolden its own Kurdish insurgency, which flared anew following the collapse of a ceasefire between militants and the state last year.

Yıldırım also touched upon Turkey's steps to strengthen its intelligence services. Domestic and external intelligence operations will also be placed under an umbrella structure for better coordination between the two and to help prevent another coup attempt, he said.

The overhaul is part of an effort to fix its intelligence network following the failed July 15 putsch, when a group of rogue soldiers commandeered tanks, fighter jets and helicopters in an attempt to overthrow the government.

The failed coup attempt was perpetrated by the Gülenist terror-cult through its militants embedded in the Turkish army.

The cult is run by the Pennsylvania-based fugitive preacher Fetullah Gülen. The cult leader in self-imposed exile in the foothills of Pocono mountains is wanted by Turkey for trial.

The Turkish premier also touched upon the extradition process of Gülen.

Turkey will ask the U.S. to speed up Gülen's extradition process, Yıldırım said.

PM to meet with CHP, MHP

Yıldırım also said that he will meet with the leaders of Turkish opposition parties, Republican People's Party (CHP) Chairman Kemal Kılıçdaroğlu and Nationalist Movement Party (MHP) Chairman Devlet Bahçeli on Monday. In reference to the opposition leaders' call to support the government against terrorism he said that he will listen to their advice.

"Fighting against terrorism will be one of main the topics of the meeting. We will also discuss the latest events in Syria and Iraq, the new constitution and new regulations after the failed coup attempt," he concluded.