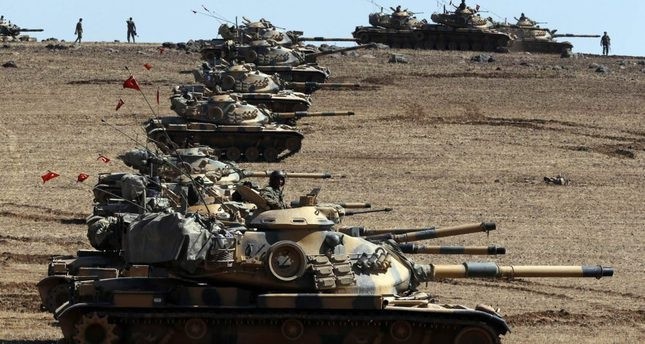 Speaking to Daily Sabah on the condition of anonymity, the official said that Turkey is taking military precautions regarding the developments in Jarablus and that the prime target was DAESH, not the PYD.

The official said that the presence of DAESH or the Syrian wing of the PKK in the Syrian town on the Turkish border was "unacceptable."

The official also said that the U.S.-led anti-DAESH coalition forces were informed about the Turkish strike on PYD targets in Manbij.

The Turkish military launched artillery strikes on DAESH and PYD positions in northern Syria, hitting the targets around 20 times "to open a corridor for the moderate opposition," another official told Reuters.

Ankara has frequently voiced its concern over the the PYD's armed People's Protection Units' (YPG) activity along the Turkish border and has been rigid in its stance in not allowing the PYD militant group to found any kind of de facto Kurdish state in northern Syria. Ankara claims the PYD enjoys close connections with the PKK, including militant and ammunition support through underground tunnels.

Earlier Monday, Foreign Minister Mevlüt Çavuşoğlu reiterated that Turkey was determined to fight DAESH terrorists inside Turkey and in Syria, after a suicide bomber attacked a wedding party, killing at least 54 people, many of them children.

Çavuşoğlu said that Turkey would provide every kind of support needed to "cleanse" Turkey's border with Syria of terrorists.

The Turkish military fired 40 shells at four DAESH terrorist targets in Syria, in retaliation to mortar shells that struck the southeastern Gaziantep province.

No injuries or deaths were reported following the incident, but security closed the area to all entries and exits as part of precautionary measures.

Occasional stray rockets and mortars land in southern and southeastern Turkey due to the civil war in neighboring Syria. Despite a cease-fire in the war-torn country, violence still persists in the area.