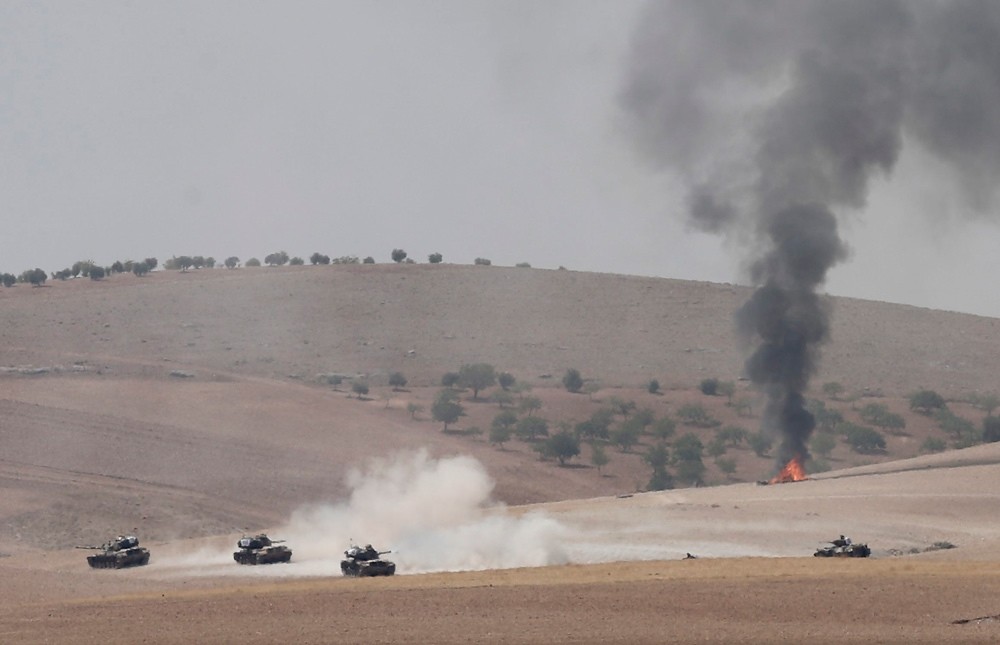 The Turkish military launched a cross-border operation on Wednesday named "Euphrates Shield" along with the U.S.-led coalition in Syria's northern border city of Jarablus to clear the area from the Daesh terror organization, the Prime Minister's office said in a statement.

Later in the day, tanks crossed the border into Syria and resumed their operation inside Syrian territory.

According to military sources, some 70 targets were destroyed only by the artillery fire and tanks which were stationed on Turkish soil.

The operation, which began at around 4 a.m. local time, is aimed at clearing the Turkish borders of terrorist groups, helping to enhance border security and supporting the territorial integrity of Syria, they said.

President Recep Tayyip Erdoğan also confirmed the operation in a conference in Ankara. Erdoğan said that the reason Turkey faces terror attacks ni recent days is Syria. He also responded to PYD leader Salih Müslim's threatening messages after Turkey's operation by saying: "There are those who say Turkey will be affected from this operation in this or that way. I tell them to think about their own future."

Preventing a new flow of migrants and delivering aid to the region's civilian population in need are also among the goals, Turkish officials added.

Haber Türk television and Hürriyet newspaper, citing unnamed military sources, said a ground offensive has not started. Hürriyet said efforts were underway to open a "passage" into the region. It quoted the sources as saying Turkish howitzers and rocket launchers had fired 224 rounds at 63 targets within an hour and 45 minutes, and that the Turkish air raids started just after 6 a.m. local time.

The move comes after a series of mortar bombs landed in the town of Karkamış facing Jarablus along the Syrian border beginning Tuesday morning, security sources said.

There were no injuries in Karkamış, which lies approximately 1 kilometer across the frontier from Jarablous, part of Aleppo governorate, where Free Syrian Army forces are fighting to take control of the city from Daesh.

On Tuesday, Foreign Minister Mevlüt Çavuşoğlu said that Turkey is ready to provide support of all kinds for the Jarablus operation to liberate the town from Daesh.

"It is important that the terror organizations are cleansed from the region," Çavuşoğlu said in a joint news conference with his Hungarian counterpart.

Operations of Turkish Armed Forces, which has been actively fighting Daesh, have significantly contributed to ongoing efforts of U.S.-backed international coalition against the terror group.