US military contributing to Turkey’s Jarablus offensive, US official says 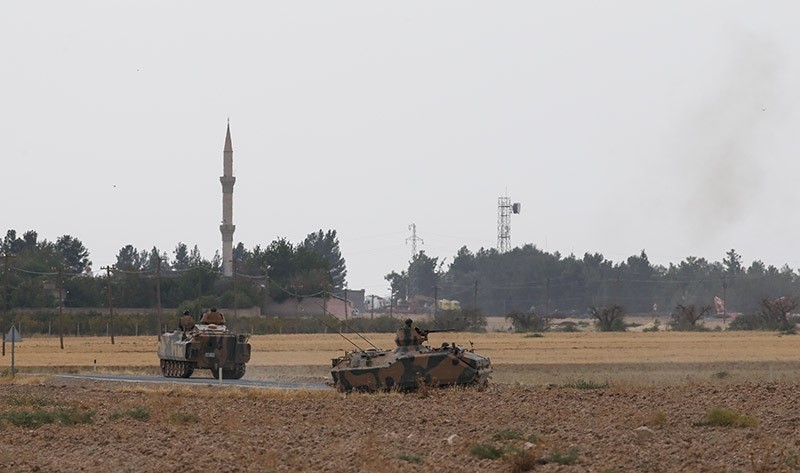 The U.S. military is providing intelligence, surveillance, and air cover if needed for Turkey-backed Jarablus operation in Syria against DAESH, a senior American official said on Wednesday.

The official, who was briefing the reporters travelling with Vice President Joe Biden, said that American advisers were communicating with their Turkish counterparts and even partaking in the planning cells about the operation Euphrates Shield, the name Turkish military determined for the offensive.

Turkish Foreign Minister Mevlüt Çavuşoğlu said that US and Turkey have been planning this operation together from the beginning, a claim seems to be confirmed by the American official. "We have been talking with the Turks for more than a year about constructs for operation that would involve moderate Syrian opposition against ISIL along 60-mile gap between the Euphrates and Mara line… It has been in our collective sights for a long time" said the official, using an alternative acronym for DAESH.

A statement released by the Office of the Secretary of Defense said that the the anti-DAESH coalition conducted air strikes on Wednesday in support of Turkish counter-Daesh operations and in support of vetted Syrian opposition forces seeking to clear DAESH from Jarablus on the Syria-Turkey border.

"Coalition ISR assets that regularly monitor the border region, a key transit point for DAESH fighters moving back and forth between Syria and Turkey, are also continuing to monitor operations along the border" the statement added.

Speaking to Daily Sabah on the condition of anonymity, the official said that the presence of DAESH or the Syrian wing of the PKK in the Syrian town on the Turkish border was "unacceptable."

Another Turkish official said that the U.S.-led anti-DAESH coalition forces were informed about the Turkish strike on PYD targets in Manbij.

The American official believes the operation was an immediate reaction by Turkey against PYD-led Syrian Democratic Forces off-limits seizure of territory in the north of Syrian city Manbij. "SDF moved about 4 km north of the agreed forward line to seize some high ground to defend area they'd cleared, but went further north than we wanted them. So I think the Turks were afraid that they were making a jail break for the border" the official said.

Americans believe, in parallel with some "informed" Turkish commentators, that Turkey is trying to create a buffer against the possibility of the Kurds moving forward.

Turkish officials said the Obama administration promised Turkey that PYD-led SDF forces would leave Manbij area following the operation and hand over the area to local Arab population. A Turkish official, speaking on condition of anonymity, said that they warned the anti-DAESH coalition about PYD's moves for a couple of times.

On the other, the American official said SDF forces were in need of several more weeks of clearing and stabilizing before they pull back. "so nothing in our arrangements with Turks as relates to Kurds eventually going back over the river that's been violated." The official claimed.

Americans say they made clear SDF that US won't support them going north. "They can't without our air cover. So we've put a lid on them moving north."