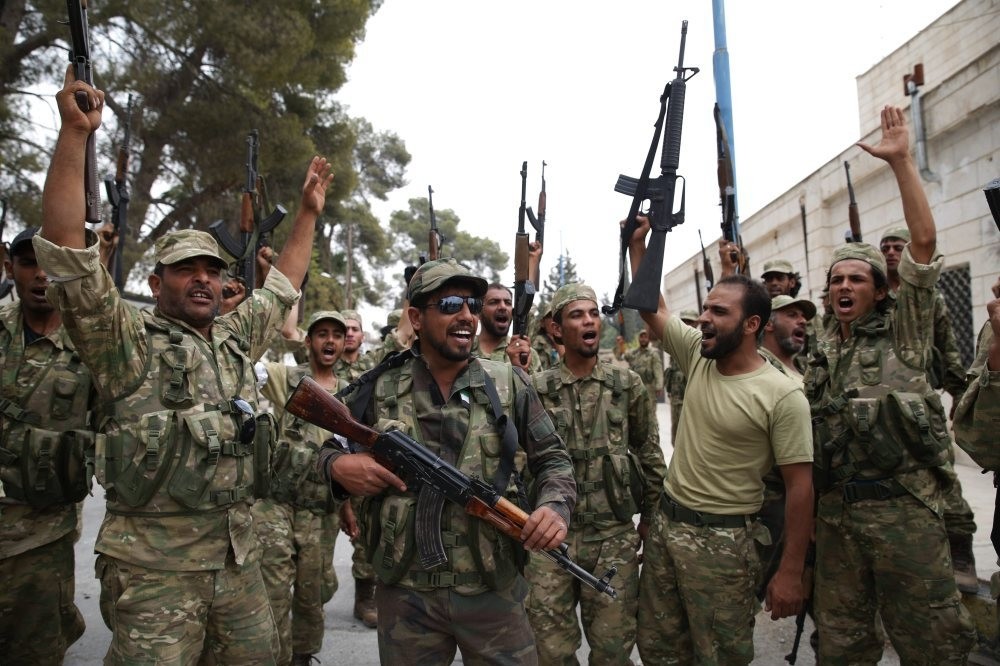 With the Turkey-backed FSA prevailing in offensives launched in northern Syria, the morale within the opposition groups bolstered and the number of new recruits coming in, morale has increased significantly

As the Turkey-backed Free Syrian Army (FSA) continues to make significant advances in northern Syria as part of Operation Euphrates Shield, the morale within the opposition group is high with new recruits coming in. Having captured the northern Syrian town of Jarablus from DAESH terrorists, Turkey-backed FSA has provided renewed confidence among the fighters, spokesmen from different opposition groups told Daily Sabah. Jaysh al-Nasr spokesman Mohammad Rashid told Daily Sabah that the FSA's victory in northern Syria boosted their confidence. "The FSA's advances in Jarablus thanks to Turkey's help bolstered our morale," he asserted.

Despite Jaysh al-Nasr being far from Jarablus, Rashid said that the quickness and success of Operation Euphrates Shield impressed other opposition groups. "Operation Euphrates Shield made us believe that we can prevail too," he added. Backed by Turkey, the FSA launched an offensive against Jarablus last week with the aim of clearing DAESH from the area. Following Ankara's repeated warnings that it will unilaterally clear its southern border of DAESH terrorists should the international community not take action, the Turkish military launched a cross-border operation. Another commander fighting in Aleppo, who wanted to remain anonymous due to security concerns, told Daily Sabah that the number of new recruits coming in following the Jarablus operation has significantly increased.

He stressed that the FSA's success gave them hope. "The success in the Jarablus operation bolstered the fighters' morale across Syria. It ignited us. Many young fighters have joined the FSA," he added.

Erem Şentürk, the editor-in-chief of the Turkish daily Diriliş Postası, recently told Daily Sabah that the success in Jarablus would result in an increase in the number of recruits.

Şentürk considered it likely that the FSA will see a growth in recruitment. "The number of FSA fighters is likely to spike. The FSA does not use group names. They say their victory has come thanks to the Syrian people," he said. "The FSA will go on to liberate al-Bab with new recruits. The morale within the FSA is high."

The Commander of Jaish al-Tahrir said the FSA would chase DAESH and advance into Çobanbey and the town of al-Bab located in rural areas of Aleppo after forming courts and providing inner security for Jarablus.

DAESH has retreated to al-Bab, and it remains to be seen whether the FSA will continue their advance. A commander from the FSA faction Faylaq al-Sham said, "DAESH fighters have withdrawn from several villages on the outskirts of Jarablus and are heading south towards the city of al-Bab." Al-Bab is strategic, because the town lies between Manbij and Aleppo. If the PYD seizes control of the town, the terrorist organization will be able to connect their cantons to Afrin.

As the FSA also makes plans to liberate Manbij from the PKK's Syrian wing PYD, the terrorist group reinforces the town.

In addition, Duran Kalkan, a leader of the PKK terrorist organization, vowed to defend northern Syria and send additional militants if the Turkey-backed FSA starts an offensive on Manbij.

Despite the U.S. claiming that the Democratic Union Party (PYD) and its armed wing, the YPG, are not directly linked to the PKK, Kalkan openly expressed support for the Syrian wing. "[Turkey entering Syria] is a serious matter," Kalkan said, adding that the PKK is ready to provide support to the PYD if needed.

As the situation in northern Syria gets more complex with the FSA marching toward Manbij and the YPG vowing to defend the town with the help of the PKK, the U.S. still keeps silent over YPG attacks on the Turkish military. A Turkish tank was hit by the YPG last week, leading to the death of a Turkish soldier. NATO and Washington could not condemn the attack, which was interpreted by many as a sign of lack of solidarity.
RELATED TOPICS