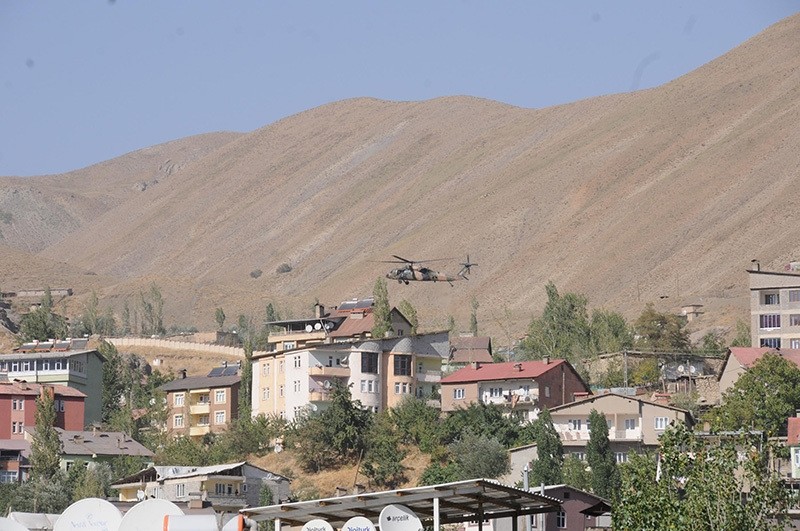 With the latest PKK terrorist attack in the Aktütün region, the number of Turkish soldiers killed since late Friday has risen to 23 amid a surge in violence, in addition to dozens of wounded civilians and officers.

Five soldiers were killed and six others were wounded as PKK terrorists attacked soldiers responsible for road security in southeastern Hakkari province's Aktütün region bordering Iraq. The wounded were brought to Hakkari city center with helicopters and transferred to Hakkari State Hospital for treatment.

These latest casualties brought the total number of Turkish soldiers killed since late Friday to 23 amid a surge in violence, in addition to dozens of wounded in the clashes.

Intense clashes have been ongoing in the Hakkari region since a large scale operation was launched against PKK terrorists in the nearby Çukurca district, which also borders Iraq, on early Friday. Two PKK hide-outs were hit by warplanes and 33 PKK terrorists were killed in clashes. 30 terrorists were also wounded. On early Saturday, seven soldiers were killed and 21 others were injured in an armed clash with the terrorists in Çukurca. The wounded soldiers were brought to Hakkari city center with helicopters and transferred to Hakkari State Hospital for treatment. Many PKK hide-outs were destroyed in the raid which was supported by an airborne operation between 10:17 a.m. and 1:46 p.m. About a 100 terrrorists out of a group of 150 were killed in the clashes, while the remaining and wounded terrorists retreated back to northern Iraq, the army said in a statement.

The statement also said that the Sept. 3 operation has been the biggest blow to PKK terrorists in recent years.

A permanent and well-fortified military outpost is located in Aktütün which guards a strategic passage point between the territory close to the Iraqi border, where PKK terrorists also use it as an assembly area, and the Yüksekova Plain, an area that includes most of Hakkari's population and arable land. Along with the Dağlıca outpost located some 25 kilometers northwest, Aktütün had been subject to large attacks in the past in which hundreds of PKK terrorists were concentrated in a single area to inflict more casualties on security forces and overrun posts. The PKK has usually been avoiding direct confrontation with the Turkish military since the early 2000s and instead has been launching hit-and-run attacks, but the region's proximity to PKK camps and its geographical conditions allow the terrorist groups to gather its militants in a single location.

Surrounded by mountains exceeding 3,000 meters on all sides, both outposts are prone to attacks, especially during bad weather when providing air cover during operations is limited or impossible. The PKK-held territory in northern Iraq lies to the south of the outposts and the PKK headquarters in the Qandil Mountains is located some 100 kilometers southeast.

A total of 11 soldiers were killed in two separate PKK attacks late Friday in the eastern Van and southeastern Mardin provinces.

Three soldiers, three village guards and a woman were injured when a group of PKK terrorists attacked a military post in Mardin's Dargeçit district. Two soldiers and a village guard died of their wounds in a nearby hospital.

Meanwhile, ongoing clashes between security forces and PKK terrorists left eight soldiers dead and eight others wounded near Mount Tendürek located between Van and Ağrı in the east.

One soldier and three village guards were killed and 18 soldiers were injured in the same area on Thursday, and an operation was launched to capture the terrorists. Initially, 11 terrorists were captured dead. Following the latest attack, Turkish jets conducted airstrikes in the area overnight, killing 13 terrorists.