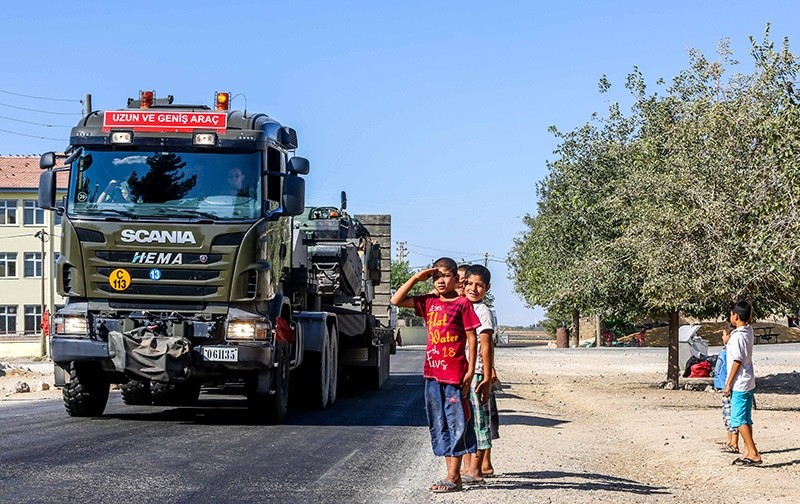 Having captured the Syrian town of Jarablus and cleansed the majority of DAESH terrorists from the area in cooperation with the Free Syrian Army (FSA), the Turkish Armed Forces (TSK) is now shifting its focus to the Elbeyli district in the province of Kilis to remove DAESH presence from the area between Jarablus and Çobanbey. As activity in Karkamış has slowed down in the last couple of days, Daily Sabah has observed that many troops and tanks were moved to the border district of Elbeyli in Kilis.

With DAESH still being dominant in the 60-kilometer area between Jarablus and Çobanbey, Turkey aims to ensure full border security by launching a cross-border operation from Elbeyli.

As Daily Sabah traveled around the villages and neighborhoods of the district, dozens of trucks carrying tanks were observed. Daily Sabah has also learned that additional FSA fighters were deployed to the area.

The Turkey-backed FSA has prevailed in Operation Euphrates Shield, which was launched last week. Having captured Jarablus, the FSA has quickly taken over control in the town.

While the FSA ensures security within Jarablus, the TSK has been clearing bordering villages of mines and handmade explosives left by DAESH. Controlled explosions have been heard since the beginning of the operation. Meanwhile, Turkish F-16 jets bombed some villages of Jarablus that are still under DAESH control. According to reports, three DAESH buildings have been bombed. According to a statement released by the TSK, the army used a proportionate number of bombs to prevent civilians from being hurt.

The Turkey-backed operation to rid northern Syria of terrorists has been successful up to this point, and a 400 square-kilometer area has already been cleared of DAESH and the PKK-affiliated Democratic Union Party's (PYD) armed wing, People's Protection Units (YPG) terrorists.

Meanwhile, the U.S. President Barack Obama said on Friday in an interview with CNN Intertional that Turkey is a strong ally of the U.S. in fight against DAESH. Obama also added that there are no security issues between Turkey and the U.S.If the Turkish Army and the Turkey-backed FSA successfully clear the 60-kilometer area between Çobanbey and Jarablus, the operation is likely to shift to the south.

DAESH terrorists targeted Kilis with more than 50 rockets that landed in the city between January and May, leaving more than 20 people dead and wounding dozens more. The last rocket attack came on Monday when three rockets fired from a DAESH-controlled area in Syria struck Kilis, injuring at least five people.

Al-Bab might be another target for the FSA to prevent the YPG terrorist group from connecting its cantons from the east and west.

A commander from a faction of the FSA, Faylaq al-Sham, recently said, "DAESH fighters have withdrawn from several villages on the outskirts of Jarablus and are heading south towards the city of al-Bab."

The strategically located town of Al-Bab lies between the cities of Manbij and Aleppo. If the PYD seizes control of the town, the terrorist organization will be able to connect their cantons to Afrin.

Amid questions raised by the West about when Operation Euphrates Shield will end, Ankara has repeatedly said that the operation will continue until all threats posed to the country's national security are removed.

Both President Recep Tayyip Erdoğan and Prime Minister Binali Yıldırım have voiced their will, saying that the army will continue to advance into northern Syria to clear the area of both DAESH and YPG terrorists.