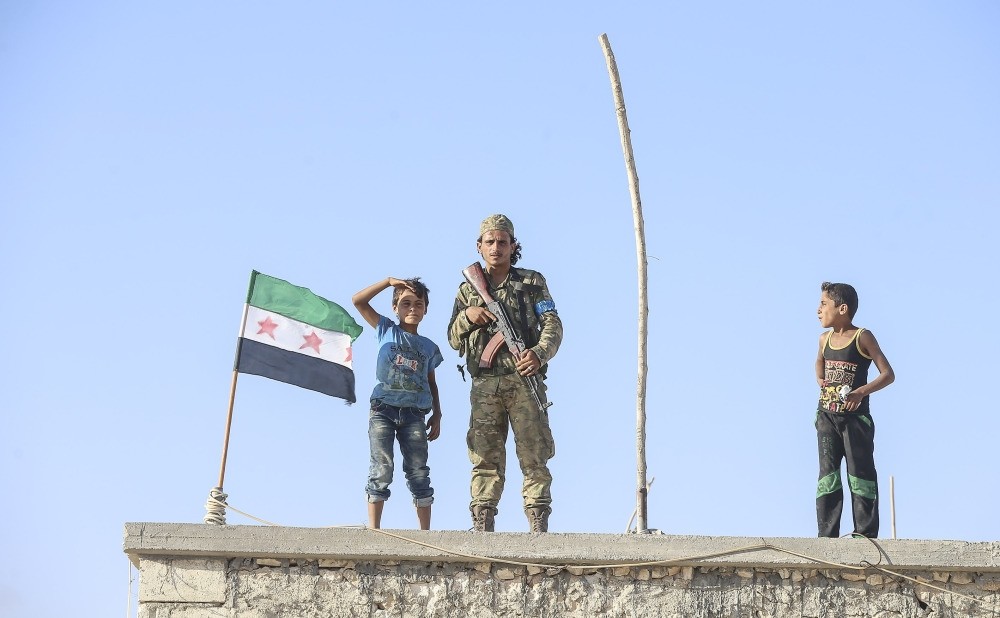 Now that the Ankara-backed FSA has cleared DAESH from Turkey's border, the new phase of the operation will focus on clearing DAESH from a wider range into Syria, which would make it harder for its rockets to reach Turkey

Amid speculation about whether the FSA would continue marching southwards to liberate al-Bab from DAESH in cooperation with the Turkish Armed Forces (TSK), the opposition did not hesitate to storm DAESH-held villages in the region south of the al-Rai.

Having seized nine villages on Monday, the FSA went on to capture two villages yesterday, liberating the villages of Mamili and Algana from DAESH.

While the FSA clashed with terrorists on the ground, Turkish howitzers and tanks pounded DAESH targets both from the Turkish side and within Syria. Dozens of howitzer and tank shots could be heard in the Elbeyli district of bordering Kilis province.The FSA is expanding operations to al-Bab due to its geostrategic position between the cities of Manbij and Aleppo.

Once the PKK's Syrian offshoot, the Democratic Union Party (PYD) seizes al-Bab, it will be able to connect its cantons from the West and the East and reach the Mediterranean. Seizing Al-Bab is vital for Turkey as well. Despite having secured the northern border of Syria by pushing DAESH southwards,the Turkish-backed FSA controls a mere 10 kilometers southwards. To ensure the establishment of a buffer zone on the Turkish-Syrian border to protect Turkey from DAESH shellings and the terrorism threat, capturing al-Bab is as important for the FSA as it is for Turkey.

Meanwhile, it remains to be seen what kind of an action the U.S. will take regarding the clashes between the FSA and the YPG. According to reports, U.S. President Barack Obama's Special Envoy for the Global Coalition visited Kobane last week to counter DAESH and met with militants of the YPG to voice support for the terror group.

Ankara and Washington have long disputed the role the YPG plays in the region. While Turkey insists that the YPG is a terrorist group, the U.S. claims that the YPG is the best solution on the ground.

As the U.S. tries to bolster the image of the terrorist YPG, Ankara continues to better its relations with the Kremlin. Having soured their relations following the downed Russian jet crisis, Turkey and Russia have taken many important steps in the last two months to bring relations to a new level.

President Recep Tayyip Erdoğan said on Monday at the G20 summit in China that Turkey is in talks with Russia to find a solution in and around Aleppo while it remains to be seen if is Turkey and Russia will join forces in defeating DAESH in the al-Bab region.

The distance between al-Rai and al-Bab is around 30 kilometers. With a 10-kilometer area to the south under FSA control, the opposition has to cover a 20-kilometer area to reach al-Bab. Even though the FSA secured the Azaz-Jarablus line in less than two weeks, it is unlikely that reaching al-Bab will be done as quickly.

The U.S. has brought its HIMARS and Hawk missile systems to the Almalı village of Gaziantep province in Turkey, indicating that Washington is honoring its previous pledge to support the anti-DAESH fight on the ground in Turkey with its missile systems.

The U.S. Embassy in Turkey announced the news via its official Twitter account: "Last night: U.S. HIMARS in place and in action. The latest step in U.S.-Turkey cooperation in the fight against ISIL [DAESH]," the tweet read. The missiles came later than the Turkish military had expected as Turkey criticized U.S. officials for delivering the missile system after the first phase of Operation Euphrates Shield was completed.

According to sources on the ground, Turkey will provide the people of Jarablus with food, electricity and water before the start of Qurban Bayram (Eid al-Adha), which starts on Monday.

As Turkish aid trucks have been deployed into Jarablus regularly since the town's liberation, Daily Sabah has learned that the people of Jarablus will enjoy electricity and water during and after Qurban Bayram (Feast of the Sarifice) holiday, also known as Eid al-Adha. Jarablus was liberated of DAESH terrorists during Operation Euphrates Shield in less than a day. Since then, the Turkish military has been clearing the city of landmines and handmade explosives in cooperation with opposition fighters.
Last Update: Sep 07, 2016 11:45 am
RELATED TOPICS