Turkey open to cooperating with US to free Raqqa from DAESH 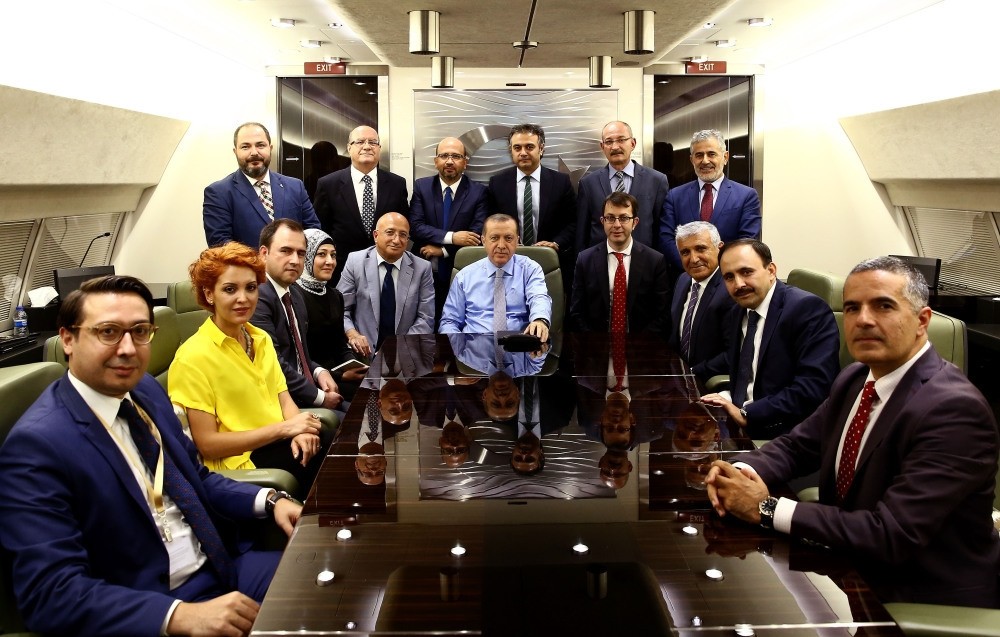 President Erdou011fan spoke to journalists accompanying him on the presidential plane on return from G20 Hangzhou Summit in China.
by Serdar Karagöz Sep 07, 2016 12:00 am

President Erdoğan said that there should not be differentiation on any kind of terrorism and reiterated the necessity of a safe zone in northern Syria for refugees. He also underscored the importance of a cease-fire in Aleppo to end the humanitarian crisis and making significant advances in the Turkey-backed Operation Euphrates Shield

President Recep Tayyip Erdoğan, speaking Tuesday to journalists accompanying him during the return flight after the G20 summit in Hangzhou, China, said U.S. President Barack Obama had communicated his desire to see the two countries cooperate to free Raqqa from DAESH occupation and that Turkey was welcome to such an endeavor and had proposed military officials from both sides discuss the details. Erdoğan, who also held a meeting with Russian President Vladimir Putin and European leaders during the summit, said the Syrian town of Raqqa served as the headquarters of the terrorist group and that the U.S.'s attitude on the matter would be definitive.

"Raqqa is one of the issues the U.S. and Turkey are currently discussing. We need to demonstrate our presence in the region. If not, terrorist groups such as DAESH, the PKK and its Syrian offshoot the People's Protection Units (YPG) will occupy the vacuum," he said, adding that similar risks were present in Iraq, especially the city of Mosul currently occupied by DAESH. He cited the operation in northern Syria launched late last month with Turkey's support for the moderate Free Syrian Army (FSA) as an opportunity to create a safe zone west of the Turkish province of Hatay where accommodation could be provided to refugees.

He said the military operation, Euphrates Shield, that began with the freeing of the town of Jarablus from DAESH was continuing with a southward thrust, with important advances toward al-Rai and Manbij. "With our military support to moderate opposition groups, significant progress has been made," said the president. The opposition fighters currently fighting DAESH were those who benefitted from Turkey's train-and-equip program, Erdoğan said, adding that they currently numbered 1,400. Supported by Turkish artillery and bombing campaign by anti-DAESH coalition countries ensured the fighters succeeded in pushing back the terrorist group and freeing Jarablus.

He said it was important to ensure that the groups formed of locals freed towns in northern Syria to prevent strife, citing the freeing of Jarablus by groups formed among its natives.

The U.S. had refused Turkey's initial proposal to free Manbij with trained Arab fighters as the city was over 90 percent Arab because it would cause a delay of two to three months, Erdoğan said. "With logistic support from the Turkish military, opposition fighters have made some headway toward al-Rai and now are moving eastward.

Erdoğan also pointed to the significant drop in the number of Syrians seeking refuge in Turkey since the start of Operation Eurphrates Shield. "Since then, the people of northern Syria are more self-confident. The people who live in the region are culturally very close to us. This gives us the opportunity to build true accommodations, rather than camps in the region."

The idea of creating a safe zone for refugees in northern Syria, which Turkey had proposed soon after the beginning of the civil war in the country, was constantly discussed, said Erdoğan, with world leaders supporting the proposal in principal but not doing anything in practice. "The same topic was raised during last year's G20 summit in Antalya, but I need to unfortunately note that nothing has been done since then."

Once a safe zone is declared, Turkey can build accommodations with proper infrastructure, Erdoğan said, adding that such projects could also be initiated in Turkey's south near the Syrian border. "Such projects could allow refugees with skills to contribute to Turkey. Those who pay for their houses can acquire its deeds. The homes of those who don't can be transferred to foundations. This can be a plan to free Syrians from refugee camps."

Erdoğan said the humanitarian tragedy in Aleppo continued and that he had discussed the matter with both Putin and Obama, with foreign ministers of the three countries scheduled to meet to declare a cease-fire. "The cease-fire will hopefully begin before the Qurban Bayram holiday starting next Monday. As soon as the fighting stops, the Turkish Red Crescent will start delivering food, medicine, clothes and toys for children. Putin said cease-fire could be secured within days."

NEW APPROACH TO TERROR BY FETÖ

On the failed coup attempt by the Gülenist Terror Group (FETÖ), on July 15, Erdoğan said the Gülenist cult has introduced a new type of terror to the world's agenda by trying to rule a country through the subversion of its state institutions. "The FETÖ coup attempt failed thanks to citizens from all walks of life and from across the country. Two-hundred-and-forty people died and 2,194 people were injured."

He said everyone, including the government, needed to heed the lessons of the failed coup. "What we now need is unity of purpose to ensure Turkey grows. Those who object to the declaration of the state of emergency should realize that it is nothing like those imposed on the people in the past, when supermarket shelves were emptied and people stock-piled food at home. This time around, life goes on as it has before. I recently asked a delegation from the Turkish Industrialists and Businessmen's Association (TÜSİAD) whether they witnessed anything different in the economy or in their lives. They said nothing had changed and business was better than before."

He said Turkey would continue to warn the world against FETÖ, which had tentacles in 170 countries. "It is a global network. We need to warn the world against this group that exploits religion, education, philanthropy and even commerce for its own devious purposes. Where do we start? Of course from here in Turkey. The same group that infiltrated the military, the police, ministries and the judiciary over 40 years can do the same elsewhere."

FETÖ leader Fethullah Gülen currently resides in an expansive compound in Pennsylvania, U.S. The U.S. is yet to satisfy the conditions of the bilateral extradition treaty with Turkey, Erdoğan said. "We have an extradition treaty with the U.S. It has an article that specifies the preventative detention of a suspect sought by the other country during the court process. However, as I told both President Obama and Vice President Joe Biden, this man continues to give interviews in his compound. The U.S. acts as if the article in question says the suspect needs to be free during the judicial proceedings."

He said the oft mentioned anti-American sentiment in Turkey did not happen in a vacuum. "Our citizens our asking how a friendly country such as the U.S. can shelter him. That's what I told Obama and said that they needed to expedite Gülen's extradition or at least incarcerate him so that the Turkish people can turn around and say that something is being done."

There was still a lot to do to rid the state from FETÖ infiltration, Erdoğan argued. "However, I also see a lot of accusations in the media by some with ulterior motives. They make false accusations against people. Such wrongs should not be committed."

The approaching U.S. presidential elections had no influence on Turkey's policies, Erdoğan emphasized, adding that bilateral relations would proceed as it had after the elections with the FETÖ issue the key factor in the soundness of ties. Erdoğan also mentioned his upcoming visit to New York to attend the annual opening of the United Nations General Assembly.

He also shared his impression that German Chancellor Angela Merkel had completely revised her stance on visa liberalization for Turkish citizens. "State election results are not encouraging for her but, as with us, they do not really reflect what will happen in a general election. I also saw [President of the European Council Donald] Tusk and [President of the European Commission Jean-Claude] Juncker were more positive on the matter."

Both Tusk and Juncker see Turkey's sincerity in tackling the refugee problem, Erdoğan said, adding that both were told that the EU had transferred only 178 million euros of the 3 billion euros plus 3 billion euros it had promised.

The renegotiation of the Customs Union between the EU and Turkey was also one of the topics of discussions with Merkel, he said. The renegotiations are scheduled to begin next year. When asked about German reports about how Merkel had knelled to him, Erdoğan said, "What we did for the refugees can be seen by all. We never exploited them for our own benefit. There is no blackmail. I found that expression inappropriate. Those who use such expressions for their own chancellor actually display their own worth."

On the G20 summit, the president said one of the main focal points was reforms to facilitate sustainable development that covered everyone. Such reforms necessitated measures on innovation and macro-economic policies and were discussed among heads of state and government who attended the summit, he said. Turkey supported the G20 taking a lead in making sure the U.N. 2030 Agenda was achieved, he said.
Last Update: Sep 07, 2016 11:43 am
RELATED TOPICS