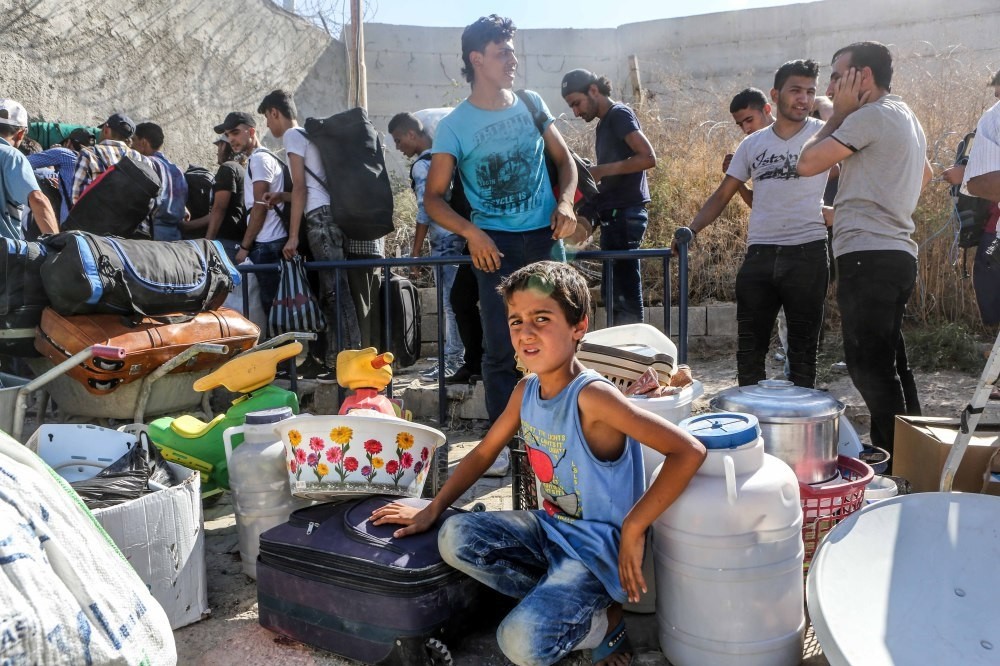 Residents from Syrian town of Jarablus prepare to return to their town after FSA liberated it from DAESH.
by Yunus Paksoy Sep 08, 2016 12:00 am

As Turkey clears its southern border with Syria of DAESH terrorists in cooperation with the Free Syrian Army (FSA), Syrian refugees taking shelter in the country are gaining new hope of returning to Syria if a safe zone is established on the Syrian side of the border. Yesterday Daily Sabah visited a refugee camp in the Elbeyli district of Kilis province on the border with Syria and talked to dozens of Syrian refugees who expressed happiness about Operation Euphrates Shield, which they say helps rid the country of terrorists. Operation Euphrates Shield was launched on Aug. 24 in collaboration with the Turkish Armed Forces (TSK) and the FSA. The Turkey-backed FSA liberated Jarablus in a single day. Later on, the opposition army swept the DAESH presence away from the southern border in little time. With northern Syria now liberated of DAESH, Turkey's suggestion to establish a safe zone in the area has resurfaced. Even though Turkey has long suggested establishing a buffer zone in northern Syria, the U.S. coalition has turned a deaf ear to the idea, even though refugees taking shelter in Turkey support the suggestion.

Muhammad Korbilal, a 45-year-old farmer who lived in the city of Mare in Syria before fleeing DAESH for Turkey said that he has been following the recent developments quite closely. "I would like to thank Turkey for clearing out terrorists from our homeland," he said, adding that the operation should continue until DAESH is eradicated from the al-Bab region as well.

Muhammad's wife Kefa, a 36-year-old housewife, burst into tears when she started to talk about her longing for her country. "I just want to get back to Syria as soon as possible," she said, adding that she prays every day for the operation to succeed. Both Muhammad and his wife Kefa asked us about the situation about the possible establishment of a safe zone in Syria. "We would leave today for Syria if a safe zone was established," they asserted.

Abduljabbar Hallak, a 43-year-old mechanical expert who lived in Azaz, said that he fled due to heavy airstrikes by the Assad regime. "Thank God that the operations have been successful so far," he said, adding that he is counting down the days to leave for Syria. "Thank God, our condition here is sufficient. However, I miss my homeland. We are now waiting for news that a safe zone being established. Thirty-year-old Abdulhamid Marzdabi from Aleppo has been staying at the Elbeyli camp for two years. "Things have been going our way since the operation started," he said, pointing to the advances made by the FSA.

Since Operation Euphrates Shield began the FSA has continued to fight on two fronts; the Jarablus front and the al-Rai front. The FSA connected the two fronts late on Sunday, clearing DAESH from along the border.

Kefa said that her seven siblings currently reside in Mare. "I can only hear their voices once a week on the phone," she said, crying due to the misery she has experienced. "God willing, the operation will succeed and we will be able to return to our homeland," she said.

Remembering his relatives still living in Azaz, Hallak said he is dreaming of a reunion with his family if there is a safe zone where they can live without being scared of DAESH violence. It remains unknown whether the U.S. and the EU would be in favor of a safe zone even though the northern part of Syria would be free of the DAESH threat.

Turkey has long asserted that a safe zone would have prevented the mass influx of refugees fleeing the civil war in Syria that started in 2011. In addition to the chance of preventing a refugee influx, Turkey believes that a safe zone should be established so that refugees willing to return to their homeland can reach their goal. Turkey-backed FSA continues to advance The FSA continues to march southwards to reach the ultimate goal of liberating al-Bab of DAESH terrorists. According to a statement released by the Turkish military yesterday, the FSA captured six villages on Sept. 6 and liberated the Wukuf, Sadvi, Al-Eyyubiyah, Shandhi, Sinekli and Abubiyad.

Meanwhile, DAESH attacked two Turkish tanks in Wukuf on Sept. 6, killing three soldiers and wounding four others. The injured soldiers were immediately transferred to the Kilis state hospital. DAESH also attacked the FSA with a car bombing on Sept. 6.

Syrians taking shelter in Turkey have begun to return home as some 250 Syrians passed through the Karkamış border gate yesterday in southern Gaziantep province, leaving for the northern Syrian town of Jarablus, which was liberated from DAESH terrorists on Aug. 25 as part of Operation Euphrates Shield.

After the Gaziantep governorate announced that Syrians could return to Syria, the first Syrians could be seen making their way to Jarablus. Many Syrians spoke to Daily Sabah in front of the gate to express their feelings about the return, saying that they are happy to be able to see their homeland after years of waiting. "We want to thank Turkey and the Turkish people for everything that they have done since we came here," 28-year-old Fariz said, while 30-year-old Fatima, carrying her baby in her arms on the way back home, said that she was grateful for Turkey's operation to sweep out DAESH in Jarablus.

The aforementioned return via the Karkamış border gate marked the first return of refugees to Syria after a remarkable portion of the region was liberated. Some Syrians used to return to Syria on special occasions such as Qurban Bayram (Feast of the Sacrifice), also known as Eid Al-Adha, and Ramadan Bayram, also known as Eid Al-Fitr.

The Turkish Armed Forces (TSK) launched Operation Euphrates Shield in cooperation with the Free Syrian Army (FSA) on Aug. 24 to secure Turkey's southern border with Syria. In less than a day, the Turkey-backed FSA liberated Jarablus.