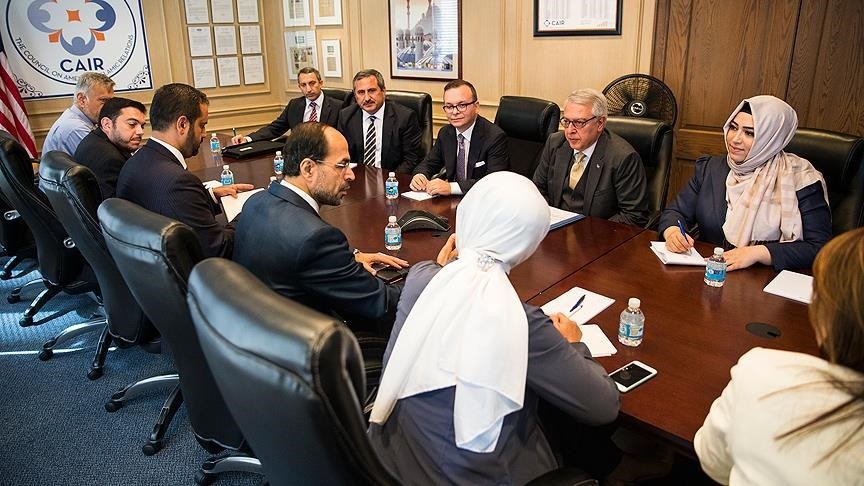 A Turkish parliamentary delegation meets with the Council on American-Islamic Relations (CAIR), the biggest Muslim NGO in the U.S., and talked to CAIR President Nihad Awad.
by Anadolu Agency Sep 08, 2016 12:00 am

Turkey has sent a parliamentary delegation to Washington to exchange ideas with American-based NGOs and meet with media representatives as well as members of the U.S. Congress to discuss the extradition of Fetullah Gülen and strengthen the friendship between Turkey and the U.S.

A Turkish parliamentary delegation composed of Justice and Development Party (AK Party) deputies has begun its tour in Washington to push for the extradition of the Gülenist Terror Group (FETÖ) ringleader Fetullah Gülen, starting Tuesday. AK Party Deputy Chairman for Foreign Relations Mehdi Eker is leading the delegation, which is composed of Turkish-American Inter-Parliamentary Friendship Group head Ali Sarıkaya, Turkey-EU Parliament Commission Co-Chair Ahmet Berat Çonkar and deputies Ravza Kavakçı Kan, Sena Nur Çelik and Emine Nur Günay, during the four-day visit this week. "The July 15 coup attempt and its aftermath, as well as the extradition of Gülen and the developments in Syria will be the main topics that we will be talking about," the party's Istanbul Deputy Ravza Kavakçı Kan told Anadolu Agency (AA). The group will meet members of Congress, civil society and opinion leaders as well as media representatives. The parliamentarians will discuss with American officials the legal process of Gülen's extradition for his role in establishing a quasi-state within the Turkish state and ultimately leading the bloody coup attempt.

As their first stop, the deputies visited the headquarters of the Turkish Coalition of America (TCA), a U.S.-based NGO on Tuesday. After receiving information about the TCA's projects and actions from TCA President Lincoln McCurdy, the delegation convened with the Council on American-Islamic Relations (CAIR), the biggest Muslim NGO in the U.S., and talked to CAIR President Nihad Awad. This meeting was also overseen by Turkey's Ambassador to Washington, Serdar Kılıç. Following the meeting at CAIR, the Turkish delegation went to the U.S. Congress to meet with the congressmen.

Speaking to AA following the meeting at Congress, Deputy Kan said that the necessary documents for the extradition of Gülen were previously handed over to the U.S. authorities. "We will talk about what we can do beyond that," she said, noting the group will also tell Americans that Gülen and his secretive organization is not only a threat to Turkey but also the U.S. Also speaking to AA, Turkish-American Inter-Parliamentary Friendship Group head deputy Sarıkaya said the group will also ask American officials to stand with Turkey against terrorism by FETÖ, DAESH, the PKK and the Democratic Union Party (PYD).

"What we expect from them is to stand with Turkey for its very right cause, to stand with Turkish democracy, to hand over the leader of this terror group - which attempted to harm Turkish democracy and the nation - to Turkish justice," Sarıkaya said. "I previously delivered a message to Congress saying that we expect very strong support from them in terms of the extradition of the FETÖ ringleader. Now, we will continue our diplomatic dialogue under the leadership of AK Party Deputy Chairman for Foreign Relations Mehdi Eker. I believe that the strategic mind of the U.S. will not choose a terrorist over Turkey."

He also said the delegation would call on American leaders to consider Turkey's concerns with respect to PYD/PKK elements in northern Syria regarding their separatist motivations inside the war-torn country and being a threat to Turkish national security. The U.S. has been providing support to the People's Protection Units (YPG), the military wing of the PYD/PKK, in its fight against DAESH but Ankara has long objected to that Washington policy, citing the group's terrorist ties to PKK elements in Turkey. "We will re-emphasize that the PYD and YPG are no different from the PKK," he said. "We will tell them about our efforts for a unified and democratic Syria." He said that the primary aim of the Turkish delegation in Washington is to raise awareness among congress members. "We want to say to the congressmen that the Turkish-American relationship is much more important and crucial than every terrorist group because both countries are in need of each other more than ever. While the world and the Middle East are undergoing a fragile period, Turkey needs the U.S. and the U.S. needs Turkey." Stressing that Turkey wants to maintain its strategic partnership with the U.S., Sarıkaya concluded by saying: "We hope that the U.S. will stand by Turkey with its congress and all its state institutions and make an effort to strengthen the relationship between Turkey and the U.S."
Last Update: Sep 08, 2016 1:34 am
RELATED TOPICS