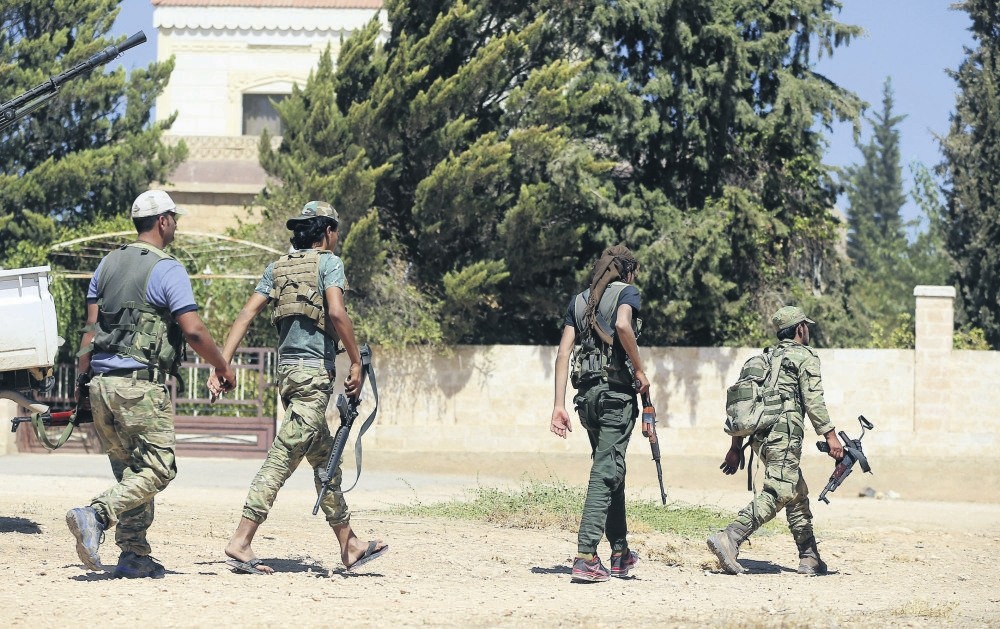 The Ankara-backed Free Syrian Army plans to take control of the Daesh-held town of al-Bab during Qurban Bayram
by Daily Sabah Sep 10, 2016 12:00 am

On the 17th day of Operation Euphrates Shield in northern Syria, the Ankara-backed FSA continues to liberate new areas from the Daesh terror group, reaching nearly 20 kilometers to Daesh stronghold town of al-Bab

As Operation Euphrates Shield enters its 18th and 19th day over the weekend, the Turkey-backed Free Syrian Army (FSA) plans to take control of the Daesh-held town of al-Bab during Qurban Bayram. The town is crucial for the terrorist group, as it controls many of its activities from there.

Having secured the southern border of Turkey with Syria, the FSA shows no let-up in its anti-Daesh fight in northern Syria. Speaking to a news agency, an FSA commander asserted that the opposition army is planning to take al-Bab during Qurban Bayram.

"Our targets are high. We want to liberate all of Syria. We would like to form a beautiful country by liberating Syria. We thank Turkey for being the most generous country in this regard," commander Fehim Isa said. Isa also said that Turkey has never left the FSA alone. "They have always been by our side," he added.

Commenting on the details of the advances that the FSA has made so far, İsa said that the army is only 20 kilometers from the town of al-Bab. "We will be at the door of al-Bab in a couple days. We will liberate al-Bab as well," he asserted.

Meanwhile, Turkish fighter jets destroyed four Daesh targets on Friday. According to a briefing statement released by the Turkish military, jets pounded targets in the Tall Ali, Tell al-hava and Vukuf areas. Over 457 Daesh targets have reportedly been hit over 2,032 times since the beginning of the operation.

According to sources on the ground, Turkey has completed the construction work for providing electricity in Jarablus. The sources added that the people of Jarablus would have electricity on Saturday.

"We will provide electricity to Jarablus this bayram, God willing," Energy and Natural Resources Minister Berat Albayrak said in a tweet on Thursday, noting that the town was now cleared of terrorists and the aim is to return life back to normal.

"Having kicked Daesh out of Jarablus, our next goal is to help bring life back to normal in the area. With hundreds of Syrian refugees returning to recently liberated areas across the Turkish-Syrian border, supplying electricity to Jarablus is a crucial step to accomplish that task," an official from the Ministry of Energy said.

Syrians taking shelter in Turkey have begun to return home, as 312 Syrians passed through the Karkamış border gate on Wednesday in the southern Gaziantep province, leaving for the northern Syrian town of Jarablus, which was liberated from Daesh terrorists on Aug. 25 as part of Operation Euphrates Shield.