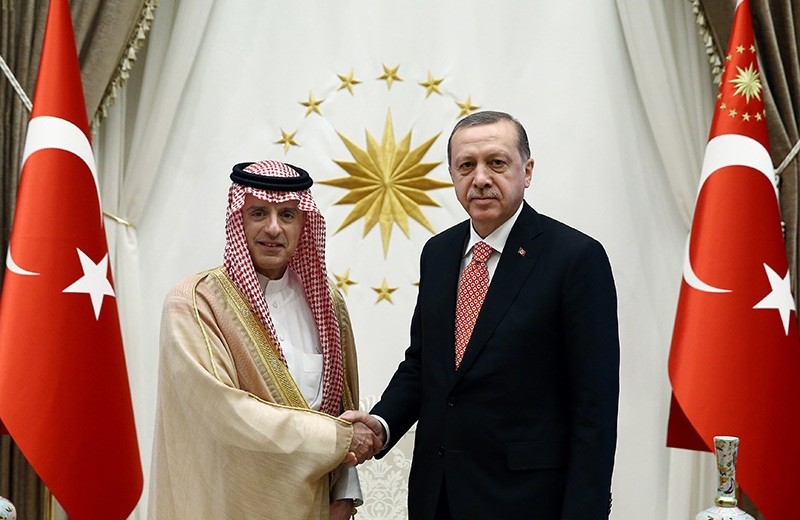 President Recep Tayyip Erdou011fan shakes hands with Foreign Minister of Saudi Arabia Adel al-Jubeir prior to their meeting in Ankara, Turkey, Thursday, Sept. 8, 2016 (AP Photo)
by Merve Aydoğan Sep 10, 2016 12:00 am
Saudi Arabia's Foreign Minister Adel al-Jubeir spoke to Daily Sabah in a brief exclusive interview on Friday where he praised the exemplary bilateral relations between Turkey and Saudi Arabia. He also noted extensive cooperation between the two countries as he affirmed that the Saudi government has not permitted Gülenist establishments in the country.

With Turkey experiencing heavy diplomacy traffic since the failed coup attempt conducted by the Gülenist Terror Group (FETÖ) on July 15, Saudi Foreign Minister Al-Jubeir paid a visit to Turkey on Thursday, where he met President Recep Tayyip Erdoğan, Prime Minister Binali Yıldırım and Turkish Foreign Minister Mevlüt Çavuşoğlu to express support and solidarity with Turkey. Foreign Minister al-Jubeir stated that the Saudi government observed extensive cooperation between Turkey and Saudi Arabia in the areas of counterterrorism and law enforcement [against all terrorist groups]. He further praised the Turkish people for the "heroism" displayed on the night of the coup attempt and underlined that the Saudi government supports the steps taken by the Turkish government on the night of the coup attempt and thereafter.

While the two countries display exemplary bilateral relations, Foreign Minister al-Jubeir stated that the strategic consultation and coordination committee between the two countries is set to meet by early November at the latest, to discuss and finalize bilateral agreements.

Responding to a question regarding the FETÖ presence in Saudi Arabia, Foreign Minister al-Jubeir said that there are no Gülenist schools in Saudi and stressed that the government would not allow any establishment by the terrorist group. "We fortunately do not have Gülenist schools in Saudi Arabia and we would not allow the establishment of any of these institutions. We have very extensive cooperation with Turkey when it comes to counterterrorism and law enforcement. We engage in extensive exchange of information and we are always open to more cooperation in any area that adds to the security of our respective people," he added. 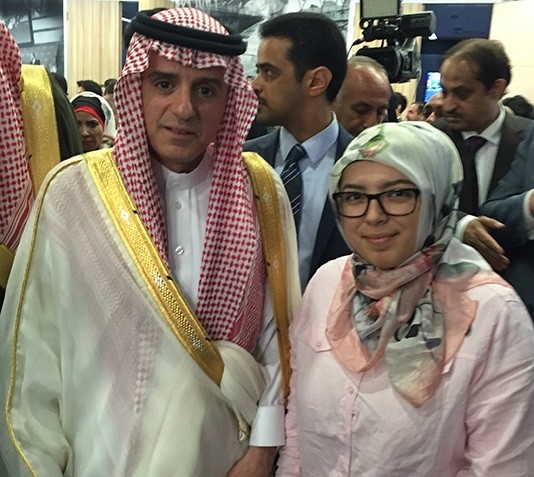 Continuing on with his remarks by praising the Turkish people for their uprising against the coup plotters on the night of July 15, al-Jubeir said the Saudi government was stunned by the incident. "We, like the rest of the world, were stunned by the coup attempt on July 15…What we saw was heroism on the part of Turkish people, they said, 'no we have had enough of military coups we have democratic government and we tend to keep it this way…' We think that the Turkish people have gained the respect of the world and Turkey should be proud of its citizens."

Commenting on the close cooperation between Turkey and Saudi Arabia, al-Jubeir spoke about that the committee established between the two countries: "It's a strategic consultation and coordinating committee between the two countries headed by the two foreign ministers and it has working groups in different areas, including security, military, trade and finance, investment, counterterrorism and social and cultural issues. The countries have a drafted number of agreements and many have been signed; some of them will be finalized soon… The first meeting of the committee will take place in October and early November," he said. As Turkey's Operation Euphrates Shield in northern Syria enters its 18th day in efforts to eliminate all terrorist groups from the region, the Saudi foreign minister, speaking at a panel organized by the Ankara-based think tank Foundation for Political, Economic and Social Research (SETA) on Friday, said that the Saudi government supports Turkey and the two countries closely cooperate against terrorist organizations. "We support what Turkey is doing, we work very closely with Turkey on supporting the moderate Syrian opposition," he added, further noting that in regards to expanding operations to al-Raqqa, "we said a year ago that we are ready to send special forces into Syria as part of the American-led coalition to fight DAESH in Syria and this is still our approach… we are for anything that leads to the elimination of DAESH in Syria or terrorism anywhere else." While he criticized Iran for its sectarian policies and said that those policies feed terrorism in the region, al-Jubeir in his speech at SETA also said, "we have great respect for Iran as a country and for the Persian nation, and would like to have the best possible relations with Iran."
Last Update: Sep 10, 2016 9:21 am
RELATED TOPICS