Jarablus enters Qurban Bayram without fear of DAESH thanks to Turkey 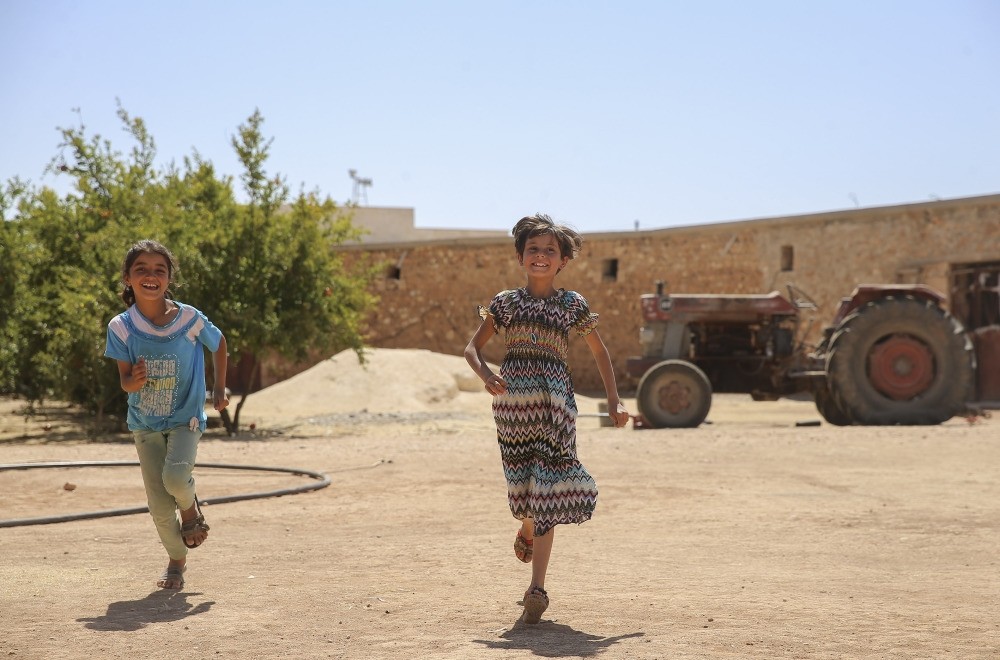 After living nearly 2,5 years under DAESH terror, children in Jarablus will celebrate Qurban Bayram freely.
by Yunus Paksoy Sep 12, 2016 12:00 am

After the successful elimination of DAESH from the Syrian border town Jarablus by the Ankara-backed Free Syrian Army, residents were able to return from Turkey back to their hometown to celebrate the Islamic holiday, Qurban Bayram with their loved ones

Having lived under the oppression of DAESH terrorists for years, the people of Jarablus are celebrating this Qurban Bayram (Feast of the Sacrifice), also known as Eid al-Adha, free of DAESH-induced fear and violence thanks to Operation Euphrates Shield, launched by Turkey in cooperation with the Free Syrian Army (FSA) on Aug. 24. Since Sept. 7, residents of the town of Jarablus who fled to Turkey have been making their way to the border town of Karkamış in the province of Gaziantep to return to their homes after the governorate allowed them to pass through the Karkamış border gate to reunite with their families in Syria for Qurban Bayram.

Following the clearance of DAESH terrorists from the town thanks to the operation by the Turkey-backed FSA in less than a day, thousands of people taking shelter in Turkey for years returned to Jarablus to experience their first bayram free of DAESH in years. In addition to the excitement and happiness of the people of Jarablus this Qurban Bayram, Turkey's efforts to provide the town with electricity and water paid off.

Turkey has completed the construction work for providing electricity in Jarablus. "We will provide electricity to Jarablus this bayram, God willing," Energy and Natural Resources Minister Berat Albayrak said in a tweet on Thursday. Electricity reached Jarablus on Saturday from Turkey.

Daily Sabah recently talked to teenagers near the Karkamış border gate who had to flee to Turkey because of DAESH. Many teenagers left their families without any support years ago because they did not want to be recruited by DAESH . They are now returning to their hometowns for an emotional reunion on Qurban Bayram.

"I'm very excited. I will get to see my mother and father years after I left home," 16-year-old Ali Berkel from Jarablus said, thanking God that his family is still alive.

Speaking to Daily Sabah on Saturday, 65-year-old Ahmed Suri and his wife Sakine Suri thanked Turkey for launching the operation. Expressing their gratitude, Ahmed said: "I'm returning to my children and my home thanks to Turkey.

Another Syrian who found shelter in Turkey, Muhammad Sayfa, said that he will get to be with his children this Qurban Bayram thanks to Operation Euphrates Shield.

The Turkish military launched Operation Euphrates Shield in cooperation with the FSA on Aug. 24 to clear its southern border of DAESH terrorists and liberate northern Syrian towns from the terrorist group.

In less than a day, the Turkish-backed FSA liberated Jarablus and continued marching from the east and the west. On Sept. 4, the FSA secured the entirety of Turkey's border with northern Syria from DAESH. Since then the opposition army has been advancing towards the south. According to the FSA, the operation will continue with the aim of capturing the strategic town of al-Bab in the south.

Speaking to Daily Sabah, many refugees staying in the Elbeyli refugee camp expressed their request for a safe zone in northern Syria so that they can reside there. Muhammad Korbilal, a 45-year-old farmer who lived in the city of Mare in Syria before fleeing DAESH for Turkey said that he dreams of a safe zone in the area. Muhammad's wife Kefa, a 36-year-old housewife, asked us about possible establishment of a safe zone in Syria. "We would leave today for Syria if a safe zone was established," she asserted.

According to a statement released by the TSK, three buildings, a vehicle and a motorcycle were destroyed in airstrikes in the South of Tell al-Hava region, killing 20 DAESH terrorists. The airstrikes were conducted on Saturday between 7:38 and 7:44 p.m.

While the Turkish military advances in northern Syria in cooperation with the FSA, Gen. Akar said in his message on the eve of the Qurban Bayram that Operation Euphrates Shield is going to continue until all terrorist elements are eradicated from the region. He added that the counterterror operations do not harm civilians.

The statement further said that Operation Euphrates Shield was launched and is currently being carried out in line with Turkey's right to self-defense according to international agreements.

Meanwhile, Turkey has welcomed the U.S.-Russian deal on a nationwide truce in Syria and is preparing to provide humanitarian aid to the northern city of Aleppo in conjunction with the United Nations, the Turkish foreign ministry said in a statement on Saturday.

"We welcome the agreement," the foreign ministry said in a statement, saying it was essential that fighting was halted across the country and that humanitarian aid reaches those in need "from the first day" of the cease-fire on the Muslim holiday of Qurban Bayram starting Monday.
RELATED TOPICS