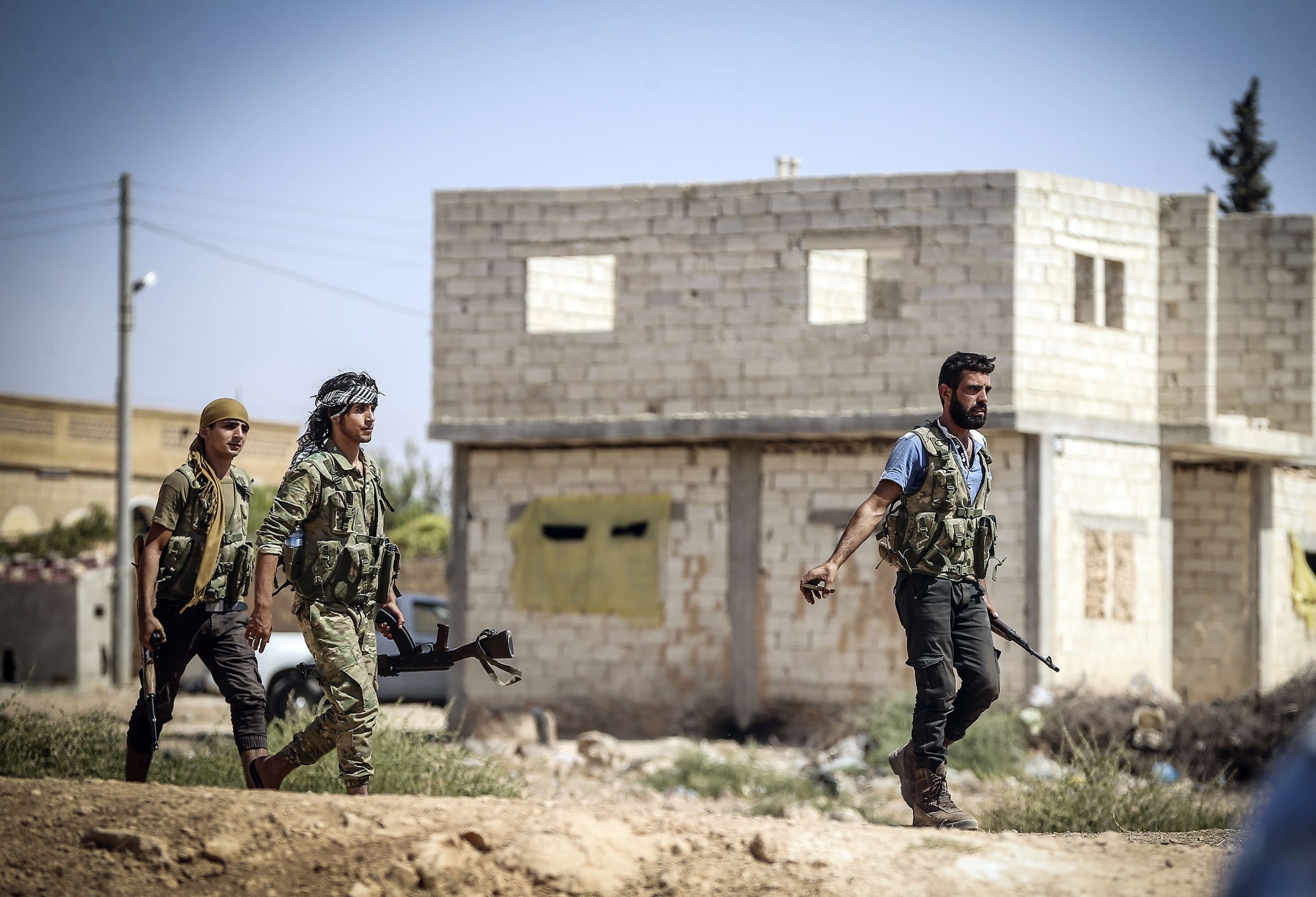 | AA Photo
by Daily Sabah with AA
Sep 23, 2016 12:00 am
FollowIng the liberation of the DAESH-held north Syrian town of Jarablus by the Turkey-backed Free Syrian Army (FSA), more than 20,000 Syrians have flocked to their homes in Jarablus. As a result of the month-long Operation Euphrates Shield, the population of Jarablus has now swelled from 3,500 to 25,000.

​As Operation Euphrates Shield continues at full steam with the Turkey-backed Free Syrian Army (FSA) marching toward the strategic Syrian town of al-Bab, the Turkish military and the FSA are clearing landmines in the area. Even though the FSA, with support from Turkish troops, quickly connected the line between Azaz and Jarablus by clearing DAESH terrorists in the region, landmines and handmade explosives have caused the operation to come to a halt. The FSA aims to march toward al-Bab and seize the town before the PKK's Syrian wing Democratic Union Party (PYD) does. The town is strategic as it is where DAESH controls its activities from. The PYD also wants to have control in the town because it will be able to connect its cantons from the west and the east. According to sources on the ground, the operation toward al-Bab will accelerate once the landmines have been cleared.

A total of 103 DAESH targets in northern Syria have been destroyed with 357 rounds of howitzer fire and 20 rounds of multiple rocket launchers, the Turkish army said late on Wednesday.

A total of 927 detected targets have been destroyed with 3,707 rounds since the beginning of the Operation Euphrates Shield, the Turkish army said in a written statement.

Syrian opposition forces re-seized the Tal-ar district of al-Rai town of the northwestern Aleppo province at 4:30 p.m. (GMT 1;30), which was occupied by DAESH militants early Wednesday, the statement added.

Operation Euphrates Shield began last month and saw Free Syrian Army (FSA) fighters, backed by the Turkish Armed Forces (TSK), take the city of Jarablus from DAESH. A total area of 900 square kilometers (347 miles) of northern Syria had been cleared of terrorists as of Monday this week, the Turkish military has said.

Turkey has said Operation Euphrates Shield aims to bolster border security, supporting coalition forces and eliminating the threat posed by terror organizations, especially DAESH. The operation is in line with the country's right to self-defense borne out of international treaties and a mandate given to Turkey's armed forces by parliament in 2014, which was extended for another year in September 2015.
Last Update: Sep 24, 2016 12:26 am