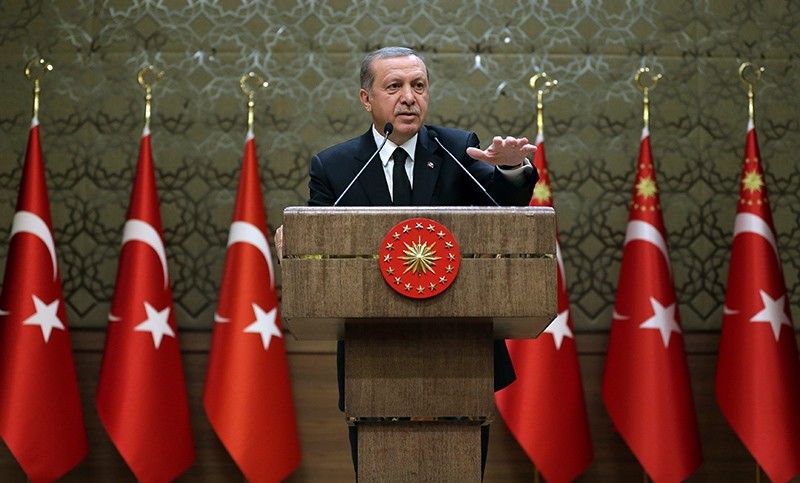 President Recep Tayyip Erdoğan stressed that the National Security Council's (MGK) advice to the government to extend the state of emergency by three months will not affect civilians and their daily life as it hasn't since it was declared on July 20.

Addressing village headmen at the Presidential Palace in Ankara on Thursday, Erdoğan underscored that the state of emergency was declared only to strengthen counterterrorism measures and will be extended to continue the fight. "In the past period of over two months, the state of emergency was used to enhance the efficiency in counterterrorism. It increases our speed in the fight against FETÖ and other terrorist groups," he asserted.

The president added that the MGK advised the extension, which the government will assess in the upcoming days. He did not rule out the possibility that it might be further extended after another three months.

"The state of emergency has not affected the public a bit," the head of the Objective Research Center (ORC), Mehmet Murat Pösteki, told Daily Sabah. He added that the majority of the public supported the declaration of the state of emergency since the very beginning. "People are aware that it was declared to be more efficient and quicker in the fight against FETÖ," he asserted.

Under Article 120, in the event of serious indications of widespread acts of violence aimed at the destruction of the free democratic order, a state of emergency may be declared in one or more regions or throughout the country for a period not to exceed six months.

The state of emergency, which comes into force after it is published in Turkey's official gazette, allows the president and cabinet to bypass parliament in passing new laws to take measures against terrorism.

Erdoğan said Turkey needed more time to clean all extensions of FETÖ and the PKK .

"We race against time. The [terror] issue is so deep and complicated it seems the initial three-month state of emergency will not be enough," Erdoğan said.

On July 15, a small military junta linked to the FETÖ attempted to topple the democratically elected president and government in Turkey and bring martial law. The attempt was prevented by military troops loyal to the government, along with police units and millions of Turkish citizens in favor of democracy. Some 241 people, consisting of mostly civilians, were killed by pro-coup soldiers, while over 2,000 people were injured.

The president also said July 15 was an attempted "invasion" of Turkish land.

"Former treachery attempts [of FETO] generally targeted directly us, or the government we rule, but this time [July 15 coup attempt] it also targeted the nation itself," Erdoğan said.

"But the nation did not hand over our lands [to coup plotters]."

The president drew attention to the Turkish military's cross-border operation in northern Syria, too. Stressing that the PKK was disturbed with Operation Euphrates Shield, Erdoğan said that the terrorist group's claim that it had been fighting Daish was refuted.