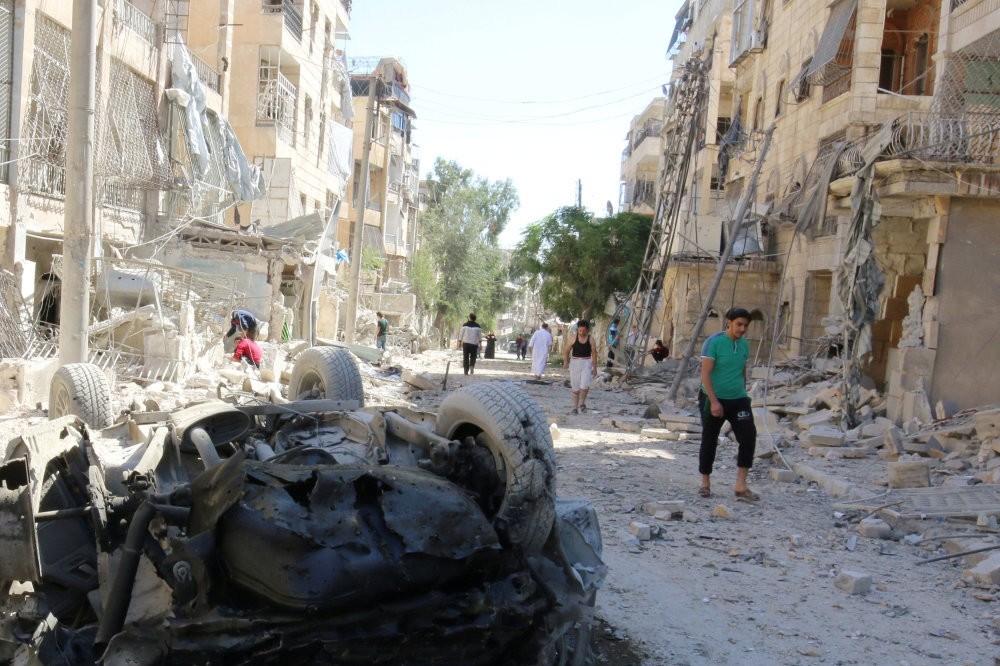 Rebel held area of al-Kalaseh neighbourhood of Aleppo where regime and Syria have intensified airstrikes since Kerry-Lavrov ceasefire deal failed.
by Mustafa Kırıkçıoğlu Oct 01, 2016 12:00 am

With Putin's visit to Turkey approaching, officials from Turkey and Russia spoke of a possible cease-fire deal between the countries for Aleppo or even a joint military operation in Syria

"Russia labels every group against Assad in Syria terrorists regardless of their stance; including moderate opposition. However, Turkey has been providing logistical support to these moderate factions since the beginning of the Syrian crisis. That makes a possible cease-fire deal between the two countries less likely," Ufuk Ulutaş, foreign policy coordinator at the Foundation for Political, Economic and Social Research (SETA) told Daily Sabah.

Ulutaş added that a possible Russia-Turkey agreement for a cease-fire in Aleepo would be more functional and durable than the Kerry-Lavrov deal, however, in order to create a common military strategy, Russia's policy toward the opposition should be changed.

Russian Foreign Ministry spokeswoman Maria Zakharova said on Thursday to a Russian website that Russia and Turkey are cooperating constructively in Syria, adding that the two countries could even conduct a joint operation in Syria.

"A comprehensive joint ground operation is not possible since Russian forces have mandate for only air operation for now, not for ground," said Maria Beat, freelance Russian journalist living in Istanbul.

Beat said it is not easy to get such a mandate from Russian Parliament, because not everyone in Russia is happy about the Russian army's presence in Syria, because of it has been losing its soldiers as well as costing the country money.

Saying that Russia has long been equipping and give training to the Syrian army, she said the Syrian military now has very sophisticated weapons including tanks, howitzers and other equipment. "Russia is doing it for a purpose since the beginning; to able to use the Syrian army for such ground operations. But first, Bashar al-Assad and Turkey must shake hands, which is not likely," Beat said.

Russian President Vladimir Putin will pay an official visit to Turkey on Oct. 11. The visit will focus on a number of issues including the Syrian crisis, the Turkish Stream and the restoration of business ties between Turkey and Russia through lifting select restrictions imposed on Turkish businessmen following the jet downing crisis. Putin will attend the Joint Economic Commission (KEK) meeting in Istanbul during his visit.

"Apart from the period following the jet crisis, the two countries have long been talking about a strategic partnership despite differences and we'll see whether this rhetoric will actually take shape during the visit," Eşref Yalınkılıçlı, a Eurasian analyst and journalist, told Daily Sabah yesterday. He also said both countries have shown maximum effort to avoid a possible conflict in Syria, particularly in Aleppo via the Bashar al-Assad and Syrian opposition.

Relations between the two countries hit a low in November 2015 after Turkish jets downed a Russian Su-24 bomber near the Syrian border for violating Turkish airspace. Turkey provided radar data that the Russian planes breached the border while Moscow insisted that the warplane had not crossed the border.In the beginning, Erdoğan and Putin exchanged harsh criticism and ultimatums in the wake of the jet crisis. Kremlin directed accusations at Ankara and imposed sanctions to various Turkish sectors.

Tension between the two countries settled when President Erdoğan expressed regret for the downing of a Russian military jet in June and the relations entered a new phase following the August 9 meeting between Erdoğan and Putin in St. Petersburg.
RELATED TOPICS