Euphrates operation must move southwards to shield us from Daish attacks, say locals 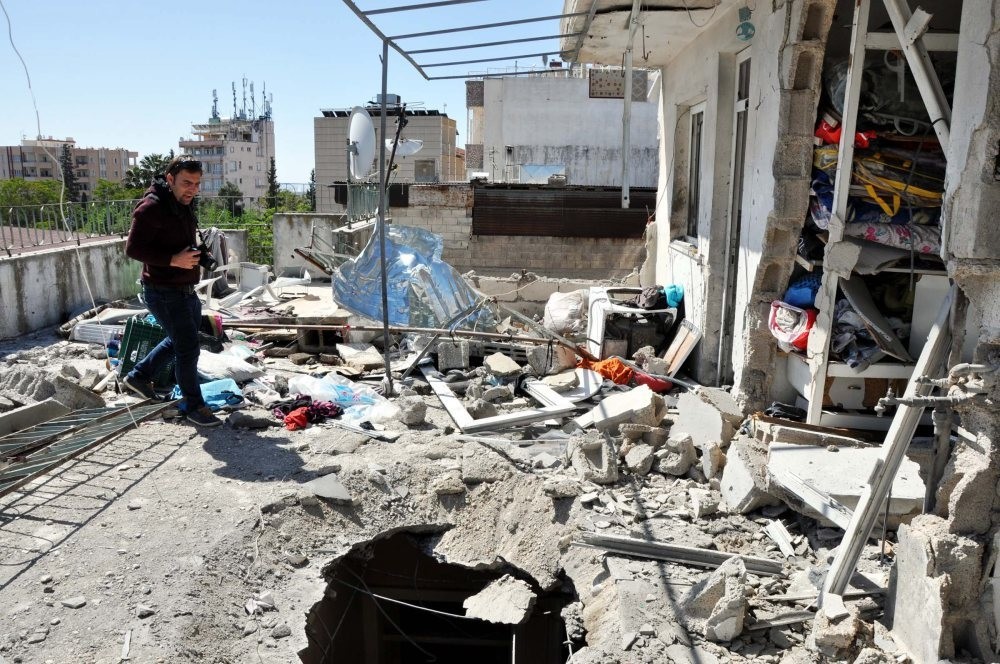 While the Turkey-backed Free Syrian Army advances through al-Bab, locals in the southern border province of Kilis can now take a sigh of relief. Locals expect the army to move further southward, pushing Daish out of range, after frequent rocket attacks in the past

People in the southern border province of Kilis have been targeted by Daish with rocket launchers and shelling from across the border since January. Children and locals said they can now breathe a sigh of relief with Operation Euphrates Shield as they expressed their expectations regarding the future of the operation to Daily Sabah. Kilis was struck again on Sunday with three rocket rounds from across the border. While two of the rockets fell onto empty space, one of them struck a property in the city center. No one was injured in the attack.

Ali Demirci, a 17-year-old high school student, told Daily Sabah he failed his schooling last year because he "could not attend classes due to security reasons." However, Demirci continues his education this year after the new semester began a couple of weeks ago. Demirci said he and his family "welcomed Operation Euphrates Shield because the attacks have recently slowed down to a great extent." He asserted that locals are aware that the cross-border operation was launched for their security. Operation Euphrates Shield was launched on Aug. 24 by the Turkish military, in cooperation with the Free Syrian Army (FSA), to eliminate Daish's threat along the southern border. The Turkey-backed FSA quickly liberated the northern Syrian town of Jarablus.

However, the border town of Kilis still can be targeted by Daish. Therefore, the Turkish military-backed FSA still needs to go southwards to push Daish terrorists where they cannot strike Turkey. President Recep Tayyip Erdoğan and Prime Minister Binali Yıldırım previously stressed that the aim of Operation Euphrates Shield is creating a 5,000-square-kilometer safe zone in Syria.

The FSA set its sights on the strategic Daish-held town of al-Bab. The town lies some 20 kilometers south of where the FSA currently is. A commander of the Sultan Murat Brigade within the FSA, Muhammed Şıhlı, told Daily Sabah on Sunday that the FSA's march toward al-Bab "will speed up soon." Vakıf Bellioğlu, a 62-year-old pensioner, also voiced his backing for Operation Euphrates Shield. "It's for us. It's for our security and it has to continue," Bellioğlu said, adding that the threat of Daish shelling has decreased after the operation. Demirci's friend, Ahmet Kavak, another 17-year-old student who also failed last year due to Daish rockets and shelling, joined the conversation. Kavak said they had to move to another province after the first rockets. "My family was scared so we moved to another province, which is why I failed in the school," he said.

Kavak said they returned home after Operation Euphrates Shield. "The operation changed many things, but it is not enough. It needs to continue southwards," he asserted.

Stressing that the threat is still there, Bellioğlu said they "will feel secure once a safe zone has been established in Syria."

As the FSA is set to move southwards to liberate al-Bab from Daish terrorists, the people of Kilis are looking forward to the days when they will be fully free of Daish's threat.

Fifteen Syrian moderate opposition fighters have been killed in clashes with the Daish terrorist organization in the last 24 hours in Syria where Turkish backed-moderate groups launched a major military operation to liberate the towns from terrorists. Another 35 moderate soldiers were injured due to the latest clashes. Turkish-backed moderate groups hit 63 Daish targets after determining them via surveillance devices on yesterday. Several weapons, six full armed pick-up like vehicles, a supplies-laden truck, seven Katyusha rocket launchers and three settlements, all of which belonged to the Daish terrorist organization, were destroyed in the operation. Turkish warplanes carried out airstrikes against Daish in the area of Akhtarin, Turkmen Bari and Dabiq in northern Syria and destroyed nine Daish targets with 10 bombs. Nine buildings, used by the terrorists as a base for command head, weapon emplacement and an ammunition depot, were also destroyed.

Meanwhile, moderate groups organized 11 airstrike operations against Daish in the area of Ziyadiyah, Bahrutah Duvaybik, Aktharin and Turkmen Bari in northern Syria. Thirteen elements of the terrorist group including four buildings, three vehicles and a mortar were destroyed.
RELATED TOPICS