Iran seen as pushing Baghdad toward confrontation with Turkey 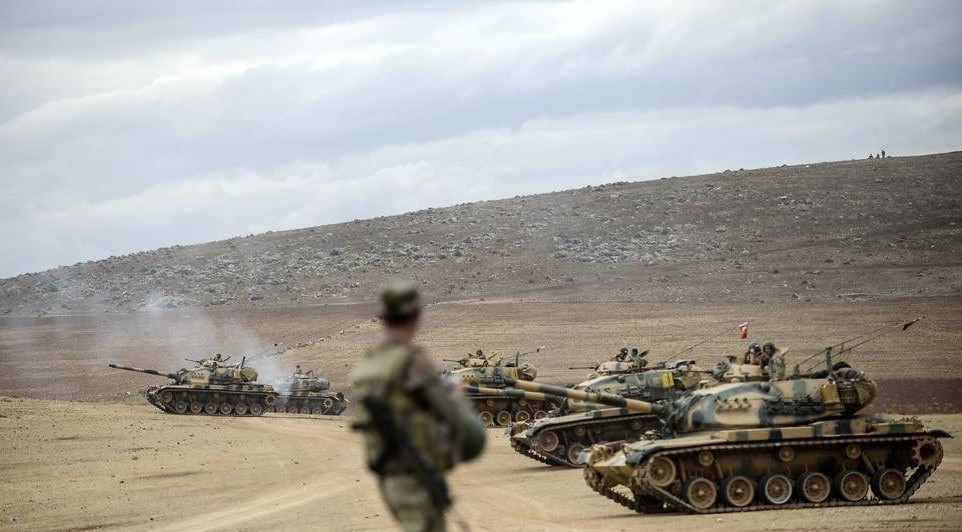 Turkey says 150 soldiers and up to 25 tanks are stationed in Bashiqa to protect Turkish servicemen training Iraqi volunteers to fight Daish
by Merve Aydoğan Oct 06, 2016 12:00 am

Experts have claimed that Iraqi parliament's controversial statement regarding Turkey's military presence in Bashiqa, Mosul is a result of Iran's influence on Prime Minister Haidar al-Abadi against Ankara, while the Turkish government denies allegations that troops are ‘invading' Iraqi soil

After a recent statement by the Iraqi parliament indicating that it did not approve of Turkey's military presence in Bashiqa and called for the removal of the military camp there, the Turkish Foreign Ministry released a statement immediately after, condemning the decision and denying claims that Turkish troops are "invading" Iraqi soil. Experts pointed to the "Iran factor" regarding the Iraqi government's hostile attitude toward Turkey. The Turkish Armed Forces (TSK) had initially been stationed at the Bashiqa camp to train the local forces in their fight against Daish at the request of Iraqi Prime Minister Haidar al-Abadi. Commenting on the increasing tensions between Turkish and Iraqi officials, Can Acun, an expert on Middle Eastern politics from the Foundation for Political, Economic and Social Research (SETA) along with Bilgay Duman, an expert focusing on Iraq at the Middle East Strategies Research Center (ORSAM), drew attention to Iran's effect on the Iraqi administration's decision as they both told Daily Sabah that there is an ongoing power struggle between al-Abadi and former Iraqi Prime Minister Nouri al-Maliki.

As the neighboring states summoned each other's ambassadors as a result of increasing diplomatic tensions, the Iraqi prime minister made more controversial remarks warning Turkey on Wednesday for triggering a regional war by keeping Turkish forces in the Bashiqa camp. However, Deputy Prime Minister Numan Kurtulmuş emphasized Wednesday that Turkey is ready to cooperate with the Iraqi central government at the Bashiqa camp if it focuses on preserving the country's territorial integrity and defeating terror groups including Daish, while he strongly denied claims that Turkish troops are invading the country.

An agreement that was reached between Ankara, Baghdad and Washington in early January and resulted in roughly 150 Turkish soldiers and 25 tanks being stationed at the Bashiqa camp, located some 30 kilometers northeast of Daish-held Mosul, is where the Turkish military trains peshmerga units and local Turkmen fighters against terrorists in accordance with the agreement. In this respect, following the meeting held in January between former Prime Minister Ahmet Davutoğlu and U.S. Vice President Joe Biden at Dolmabahçe Palace in Istanbul, it was also announced that "During the meeting, an agreement has been reached on strengthening coordination on the Bashiqa camp in Northern Iraq and in the fight against Daish in Iraq and on moving forward with new initiatives."

In this respect, SETA expert Acun underlined that the Iraqi administration is currently positioned in a power struggle between al-Abadi and al-Maliki, using Bashiqa as a bargaining chip. Acun said, "Abadi is trying to maintain his current position by using the 'Turk card' [referring to the Turkish troops' existence]." Touching upon the "Iran factor" with regard to Iraq's decision, Acun also noted that all sides are trying to establish their own hegemony and aim to restructure Mosul. Echoing those remarks, Duman also drew attention to Iran's effect on the Iraqi administration, stating that those who voted in favor of the decision belong to a reform group formed by al- Maliki which has close ties with Iran. Stressing that Turkey maintains a constructive position at the Bashiqa camp, Duman said that the Turkish Foreign Ministry's statement still invites the Iraqi government to work in cooperation with Turkey on the Bashiqa matter. As Turkey continues to be a regional power and a strong symbol of stability in the region despite the bloody coup attempt on July 15, Duman emphasized that the maintaining of close relations with Turkey would benefit Iraq, adding that Iraq saw its most prosperous periods of stability when it had good relations with Turkey.

Commenting on the Iraqi parliament's recent decision, Iraqi envoy to Ankara Hisham al-Alawi told Daily Sabah on Wednesday that the debates are not new and added "the Iraqi government and authorities have made it very clear right from the very beginning of December last year

that they perceived the Turkish military forces presence as a violation of Iraqi sovereignty and had called upon the Turkish authorities to withdraw those forces as soon as possible." He also added that there were discussions between Turkish and Iraqi authorities when it comes to general support in counter-terrorism but not sending troops to Bashiqa camp. In regards to the meeting at the Turkish Foreign Ministry, al-Alawi said that it was planned a week ago and had nothing to do with the recent resolution. "We have talked about the recent development and we made it clear that the recent statement had raised tensions between the two countries," he added and said that the two countries must work together. He stressed that the Iraqi government is committed to working with Turkey through diplomatic channels away from public statements, saying that public statements have enflamed the situation. He also noted that they had addressed the Iraqi government's preparations to liberate Mosul.
Last Update: Oct 06, 2016 1:32 am
RELATED TOPICS