Jarablus revived thanks to Turkish efforts as new houses built 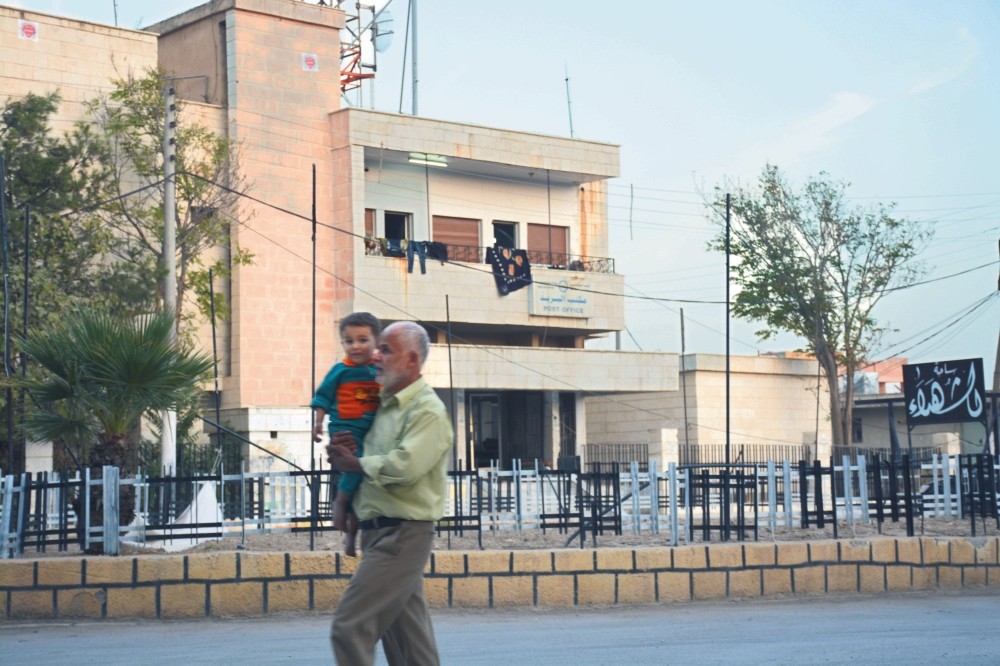 A local carrying his child walking in the main square in the northern Syrian town of Jarablus. Daily Sabah observed the new life in the war-torn town.
by Yunus Paksoy Oct 06, 2016 12:00 am

After the Turkey-backed FSA liberated Jarablus, the population of the town rose to around 25,000 from only 2,000 as the government continues efforts to build new houses due to high demand

The northern Syrian town of Jarablus used to look like a ghost town with only around 2,000 inhabitants under Daish rule but Operation Euphrates Shield, launched by the Turkish military on Aug. 24, changed the fate of the town.

After the Turkish Armed Forces (TSK) liberated Jarablus in cooperation with the Free Syrian Army (FSA), thousands of people made their way back home. Since the liberation of Jarablus days after the start of Operation Euphrates Shield, more than 4,000 Syrians taking shelter in Turkey returned to the town to reunite with their relatives.

Turkey's cross-border operation that aims to liberate Daish-held villages and towns, gave tens of thousands of Syrians their homes back. The population of Jarablus recently reached around 25,000.

Jarablus residents speaking to Daily Sabah said that newcomers have difficulties finding a flat. "The population has skyrocketed since the Turkish army liberated Jarablus. People are returning home but the houses are full," a fighter in the FSA told Daily Sabah at the main square of Jarablus.

In response to the problem, the Turkish government and nongovernmental organizations (NGOs) have been building houses in the town as well as schools and hospitals.

Speaking to Daily Sabah, a Turkish official who did not want his name to be public due to restrictions on speaking to the media said that there is ongoing work to fulfill the needs of Syrians in Jarablus.

Fatima Salih, a 29-year-old local, told Daily Sabah that she returned to the town after she heard that it was liberated from Daish terrorists. "I decided to take my kids and return to Jarablus. I reunited with my husband here, who has been fighting among FSA ranks," she said.

On Monday, the Justice and Development Party (AK Party) youth branch brought two trucks of humanitarian aid to Jarablus being the "voice of the oppressed in Syria."

In the city center, members of the AK Party youth branch distributed the humanitarian aid to locals with Daily Sabah as children in particular were seen jumping up and down for joy after they received toys.

Monday's humanitarian aid convoy brought baby food, bread, water, pasta, olive oil, sugar, rice, chocolate and other basic needs to the residents there. In addition, a large number of beds were brought in with the trucks.

In addition to the humanitarian aid delivered to locals in Jarablus by the AK Party youth branch, other convoys by the Turkish Red Crescent, Gaziantep Governorate and other NGOs continue every week.

Muhammed İsmail, another resident speaking to Daily Sabah at the city center, said that they are more than happy to be home rather than any other country in the world. "Despite our difficulties in this war-torn town, we thank God for being home," he asserted.

One soldier was killed and three others injured in the northern Syrian town of al-Rai in a Daish attack on Monday.

According to the Turkish military, clashes occurred between the Turkey-backed Free Syrian Army (FSA) and Daish on Monday. At least 28 Daish terrorists were killed and one Turkish soldier died in Ziyara, located in eastern al-Rai, which is controlled by the FSA.

A total of 1,875 Daish targets have been destroyed by over 7,100 rounds of artillery and rocket fire since the start of the operation in late August.

Since the beginning of Operation Euphrates Shield, a total of 115 residential areas in 980 square kilometers (380 square miles) of northern Syria have been cleared of Daish terrorists.

Meanwhile, the TSK released a statement regarding the developments along the borders between January and October.

The army said that 299,612 people have been captured trying to illegally cross the border. The statement also said that 185 weapons have been seized during the said months, adding that 52,157 TSK personnel are providing border security in the area.
Last Update: Oct 06, 2016 1:05 am
RELATED TOPICS