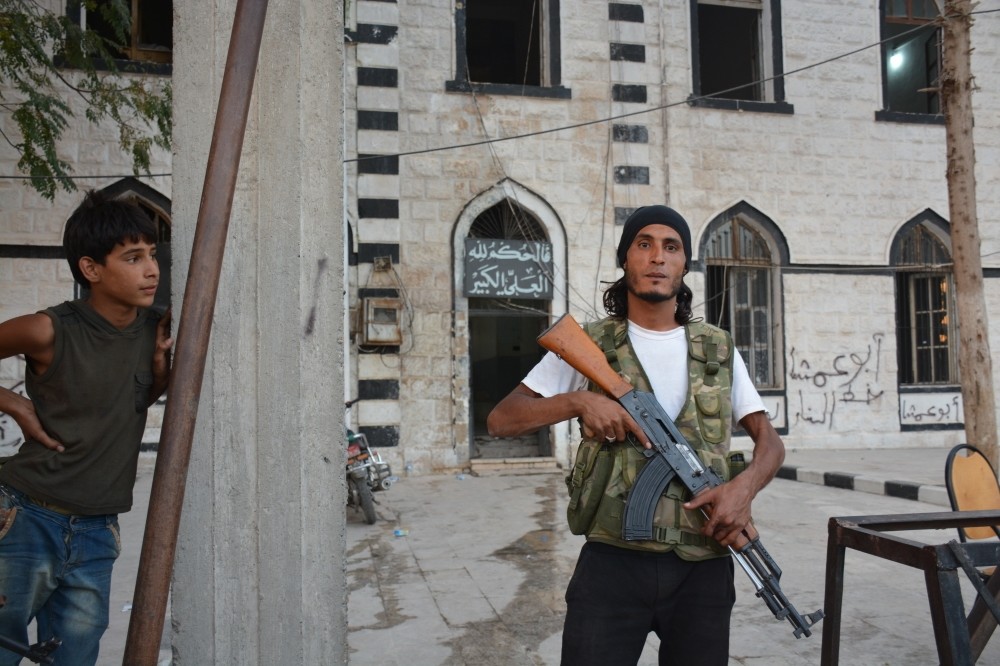 A Free Syrian Army fighter poses in the main square of the northern Syrian town of Jarablus.
by Yunus Paksoy Oct 07, 2016 12:00 am

The Turkey-backed FSA has been closing in on the significant Daish-held Syrian towns of Dabiq and al-Bab. FSA commanders told Daily Sabah that they are ready to take on the terrorist group to liberate the aforementioned towns

Having cleared Turkey's southern border of Daish and securing the Azaz-Jarablus line, Turkey-backed Free Syrian Army (FSA) commanders and fighters are set to take on Daish terrorists in the significant towns of Dabiq and al-Bab soon. Daily Sabah talked with FSA commanders and fighters in the northern Syrian town of Jarablus, which was liberated by the Turkey-backed FSA shortly after Operation Euphrates Shield was launched on Aug. 24. FSA commander İsmael Arab, who fought in the clashes to liberate Jarablus, told Daily Sabah that the opposition army is looking forward to battling Daish in Dabiq. The FSA has around 3 kilometers to cover until it arrives in the town.

Dabiq is crucial for Daish as it believes that the town is sacred and a doomsday war will one day be fought there with "infidels." According to the FSA, Daish terrorists will be devastated once the town has been captured. Hamza, a 20-year-old FSA fighter who talked to Daily Sabah in Jarablus, said that he is ready to take on Daish terrorists if need be. "We liberated Jarablus, and God willing we will liberate Dabiq as well," he said, adding that the FSA's ultimate goal is to sweep out Daish presence across Syria.

After the first phase of Operation Euphrates Shield, which ended with the completion of the Azez-Jarablus line, the FSA has set its sights on capturing al-Bab, 25 to 30 kilometers south of Turkey in northern Syria.

Arab said that the army has been preparing for an extensive war in Dabiq. "We know that Daish has been retreating to Dabiq and reinforcing there but we are ready for it, too," he asserted. As the FSA makes advances southwards, Dabiq remains an obstacle that has to be dealt with for the opposition army.

Recently, the former president of the Syrian Turkmen Assembly, Abdurrahman Mustafa, asserted that Daish will collapse if Dabiq is liberated. A 27-year-old local in Jarablus, Abdullah, said that the liberation of Dabiq will boost morale in the FSA. "It is important for us as well. The further the FSA advances southwards, the more hope we get about our future," he asserted.

Sources on the ground have been telling Daily Sabah that Daish has been retreating to Dabiq and al-Bab for fierce clashes. Apart from Dabiq being a sacred town for Daish, al-Bab has a different significance.

Daish operates its economic activities in al-Bab. If the terrorist group loses the town to the FSA, it will be dealt a heavy blow.

Sultan Murat Brigade within the FSA, Muhammed Şıhlı, told Daily Sabah recently in an exclusive talk that some minor problems in the FSA have been sorted out and the opposition fighters are looking forward to liberating Daish-held al-Bab.

Once the PKK's Syrian offshoot, the Democratic Union Party (PYD) seizes al-Bab, it will be able to connect its cantons from the West and the East and reach the Mediterranean. For this reason, seizing Al-Bab is vital for Turkey.

The Turkish Armed Forces (TSK) hit at least 78 Daish targets in northern Syria on Wednesday as part of the ongoing Operation Euphrates Shield.

In a written statement released yesterday, the military said 68 Daish targets were hit with 252 rounds of howitzer fire and 80 rounds of multiple rocket launchers. A total of 118 residential areas in nearly 1,000-square-kilometers (386-square-miles) of northern Syria have been cleared of Daish since the beginning of the operation, the statement said. Turkey has recently announced that Operation Euphrates Shield will continue until a 5,000-square-kilometer area has been secured. To date, 1,943 targets have been destroyed by over 7,432 rounds fired by Turkish Firtina howitzers. In addition, Turkish jets have destroyed 10 targets in an air operation in the Akhtarin and Kabtan regions, said the statement.

Moreover, three Daish terrorists were killed in an air operation conducted by coalition forces in the northern Turkmen Bareh region. The statement added that the Turkish Armed Forces had taken all measures to protect civilians in the regions. Operation Euphrates Shield, which was launched on Aug. 24, is aimed at bolstering border security, supporting coalition forces, and eliminating the threat posed by terrorist organizations, especially Daish.
Last Update: Oct 07, 2016 1:47 pm
RELATED TOPICS