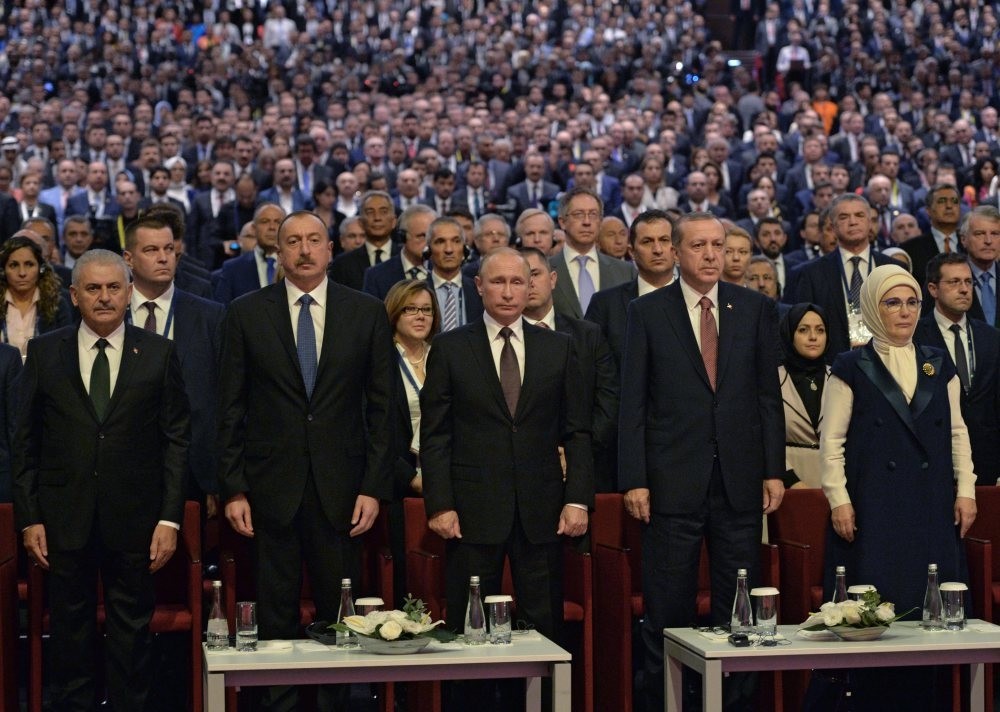 President Erdoğan called on the international community to be united and act in cooperation against all terror groups, urging them to help establish peace and calm in Syria and Iraq. The president also reiterated Ankara's right to defend itself against the PKK, YPG, Daish and FETÖ terror groups both inside the country and beyond its borders

President Recep Tayyip Erdoğan urged the international community to cooperate in establishing peace in Syria and Iraq Monday, pointing to other unstable parts of the Middle East at the 23rd World Energy Congress in Istanbul.

"Let's join hands to bring peace and calm to Syria, Iraq and the Middle East. A little child in Aleppo should have hope inside of him when he looks up to the sky. However, when they look to the sky today they see only despair as helicopters and planes target them with bombs. The children of Mosul should be able to dream freely about their future. However, right now they are only calculating the cruelty of Daish and the threat of sectarianism they will face in the terrorists' wake," the Turkish president said. Burhanettin Duran, the general coordinator of the Foundation for Political, Economic and Social Research (SETA) and a professor at Ankara Social Sciences University, drew attention to President Erdoğan's slogan during the summit, saying: "Actually, I don't foresee any possibility for ceasefire deal in Aleppo before Raqqa and Mosul, two Daish strongholds, have been cleared of the terrorists. After that, a new period will begin and actors will be able to focus more on these other issues," he noted.Stressing that the future of the entire country hinges critically on Aleppo, Duran said that the Assad regime and the Kremlin aim to strengthen their position in the civil war by capturing the city, which is considered ground zero in terms of the migrant issue, while opposition forces do everything they can to hold the country's second largest city.

This is the second time that Erdoğan and Putin have met in three months.

Relations between the two countries hit an all-time low in November last year after Turkish jets downed a Russian Su-24 bomber jet near the Syrian border for violating Turkish airspace. Turkey provided radar data that the Russian planes had breached the border while Moscow insisted that the warplane had not crossed into Turkish airspace. Tensions between the two countries were eased when President Erdoğan expressed regret to his Russian counterpart over the downing of a Russian military jet back in June.

Duran said that repairing relations between Turkey and Russia is favorable for both countries, adding that normalization has come at a time when both countries need it, emphasizing that Turkey's involvement in the Syrian crisis is important not only for Syria but overall stability in the region."Turkey can also be a mediator between Russia and the U.S.," Duran added.

He said that all actors in Syria and Iraq are trying to strengthen their hands for the post-Daish period, noting: "The recent crisis between Turkey and Iraq regarding the Bashiqa military camp is also directly related to this issue, as Syria and Iraq tried to exclude Turkey from the military equation before returning to the negotiating table after the success of Operation Euphrates Shield," said Duran.

The president commented on Turkey's recent operation backing the Free Syrian Army (FSA) in Syria under the auspices of Operation Euphrates Shield, and the presence of Turkish troops in Bashiqa, Iraq near Mosul to train the Arab Sunni and the Kurdish peshmerga forces, saying Turkey is rightful to put forth efforts to stop terrorism beyond its borders. "Turkey's effort in Syria and Iraq are not just ordinary choices, but rather are vital for sovereignty," Erdoğan said, adding that the terror groups attacking Turkey's unity and peace will not achieve their aims. "Turkey possesses the determination and capability to fight all these terror groups,"the president said.

Ankara has reiterated its supportive position to Washington on the liberation of Mosul from Daish, in addition to the position of continuous support for Iraqi Turkmens in areas close to Mosul. However, Turkey also warned the U.S. that political sensitivities must be taken into consideration; particularly to avoid any possible sectarian conflict between Sunnis and Shiites, as well as threats to Iraq's territorial integrity.

Meanwhile, Turkey has repeatedly urged the Obama administration to cut ties with the PYD/YPG, saying that if Turkey and the U.S. increase their cooperation in the fight against Daish, it will be more effective to fight the terrorist organizations. The PKK is recognized as a terrorist organization by the U.S., EU and Turkey. President Erdoğan also thanked the participants for their support against the July 15 coup attempt by the FETÖ terror group, saying their support"should be a lesson for those who should have called what happened a coup attempt, while making speeches about democracy."

On July 15, a small military junta linked to FETÖ attempted to stage a coup to topple the democratically elected president and government in Turkey and impose martial law. The attempt was prevented by military troops loyal to the government, along with police units and millions of Turkish citizens in favor of democracy. In total, 241 people consisting of mostly civilians were killed by pro-coup soldiers, while over 2,000 people were injured. The attempt was masterminded by Fethullah Gülen, who has been living in self-imposed exile on a 400-acre property in the foothills of the Pocono Mountains in Pennsylvania since 1999.
Last Update: Oct 12, 2016 11:37 am
RELATED TOPICS