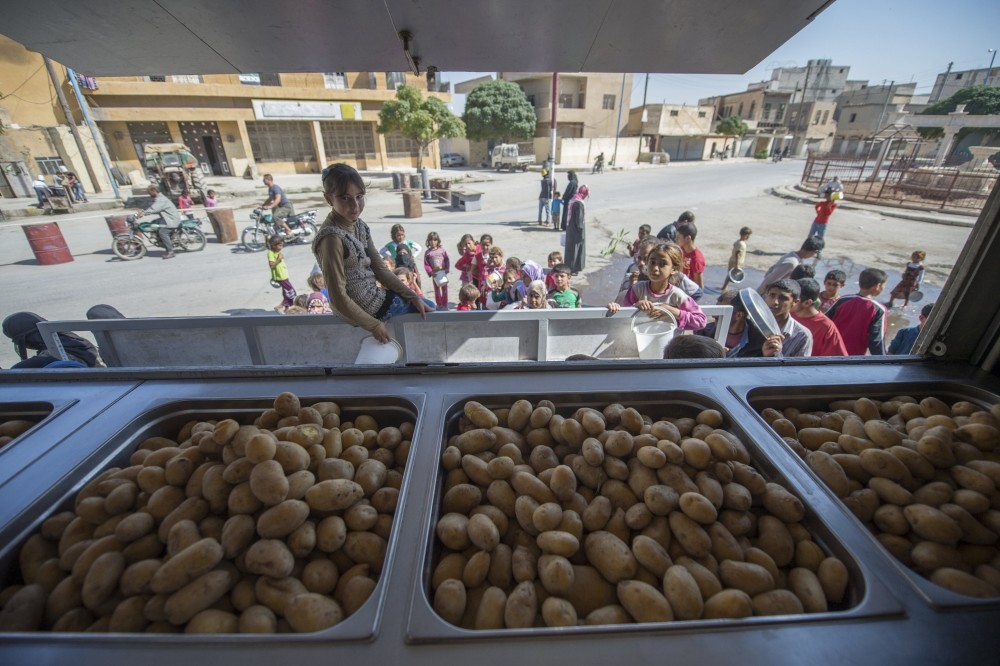 Social life, businesses in Jarablus were heavily affected following Daish’s invasion as rent increased by 500 percent and the town’s population decreased to 1,000 people. Local tradesman and shopkeepers said economic life in Jarablus has been slowly reviving after the Turkey-backed FSA liberated the town

The people of Jarablus used to live in peace before Daish came to the town and seized control of it in February. As the reign of Daish started, people's lives turned upside down with new rules, regulations and bans.

Women and children were the most affected by the new environment in Jarablus, as Daish banned women from stepping outside the house and children from going to school. However, the misery wrought by Daish was not just limited to women and children.

Businesses were heavily affected after Daish terrorists stormed the town. Daily Sabah talked to tradesmen and shop owners in Jarablus about what kind of difficulties they experienced after Daish seized the town.

Saban Masri, a 60-year-old greengrocer located downtown, said he did not have the chance to leave Jarablus because he "could not leave the shop behind."

Jarablus, which has a population of around 25,000, was only home to around 1,000 people before it was liberated by the Turkish military-backed Free Syrian Army (FSA) on Aug. 24 as part of Operation Euphrates Shield. As we strolled around the main bazaar of Jarablus, we came across tradesmen who were unable to flee Daish as they refused to abandon their shops.

Daish terrorists came to me quickly after they seized the town. They said I would pay five times more rent from that moment on. Otherwise I would have been killed," Masri said.

Apart from what Masri endured during the Daish reign, locals were in urgent need of bread and basic foods. Daily Sabah learned that the price of a loaf of bread skyrocketed after Daish seized bakeries. People bought bread eight to 10 times more expensive in the post-Daish Jarablus.

Dervish Salim, a 63-year-old Syrian earning his life by selling clothes and goods on the street, was also among those who could not flee Daish terror. "Life was unbearable when Daish was here. Thank God we are much better now. At least we can again sell something to earn our living on the street," Salim sighed.

Jarablus, which looked like a ghost town only two months ago, was bustling with shops and buyers. The difference between this Jarablus and the one two months ago was worth seeing, as Masri told. "I was only killing time there sitting in front of the shop. Then there was the fear of Daish terrorists. Today it is entirely different," he explained.

Despite better conditions for Salim and his eight children following the liberation of Jarablus, he called on the world to act on Syria. "Daish only brought poverty into our town. We thank Turkey every day for liberating our Jarablus. The world should also take action. Making a living here is not that easy," he asserted.

Salim's son who helps him sell the goods on the street, 27-year-old Muhammed, said that he is currently unemployed. "I help my father currently because I am unemployed. Daish spoiled the business in the town over the course of the last two-and-a-half-years," he said, adding that the people in the town are trying to bounce back.

Operation Euphrates Shield, which was launched on Aug. 24 with the aim of sweeping out Daish terrorists in Syria, has apparently bettered the lives of the people in Jarablus. As the operation enters its 53rd day, the liberation of the whole Syria remains a target for the FSA.