Turkish operations in Syria to continue towards al-Bab 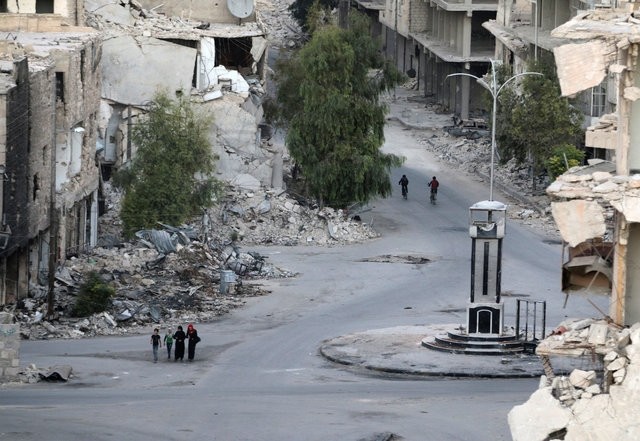 Following the liberation of Jarablus a few weeks back, another north Syrian town, Dabiq, has been liberated as a result of a military offensive carried out by the Turkey-backed Free Syrian Army

The Turkish-backed Free Syrian Army (FSA) Sunday liberated the northern Syrian town of Dabiq in a successful military offensive. The liberation of Dabiq came after a long period of preparation by the opposition army in cooperation with the Turkish Armed Forces (TSK). According to FSA commanders, the villages of Dabiq and Soran were cleared as part of Operation Euphrates Shield, which was launched on Aug. 24 by the Turkey-backed FSA. Dabiq, about 40 kilometers northeast of Aleppo and around 10 kilometers south of Syria's border with Turkey, has a symbolic importance for Daesh.

The terrorist group previously declared that the town is sacred for them. The TSK-backed opposition fighters have so far liberated a 1,130-square-kilometer area from the terrorist group. Operation Euphrates Shield has prevailed, clearing Turkey's southern border of terrorists. The FSA's attention now turns to liberating the important Daesh-held town of al-Bab. The FSA is expanding operations to al-Bab due to its geostrategic position between the cities of Manbij and Aleppo. It is also aimed at sweeping out Daesh and liberating the people of al-Bab. Once the PKK's Syrian offshoot, the Democratic Union Party (PYD) seizes al-Bab, it will be able to connect its cantons from the West and the East and reach the Mediterranean. Seizing al-Bab is vital for Turkey.

Operation Euphrates Shield will continue towards al-Bab, some 29 kilometers (18 miles) from the Turkish border, he added.

"They [Free Syrian Army] have gained major successes in northern Syria and life is getting back to normal there. That's what we want to see in Syria," he said.

He said the village of Dabiq in Syria was cleared of Daesh as part of the operation. "The target is to continue towards al-Bab and liberate Manbij area completely from Daesh terrorists," the foreign minister said.

To ensure the establishment of a buffer zone on the Turkish-Syrian border to protect Turkey from Daesh shelling and the terrorism threat, capturing al-Bab is as important for the FSA as it is for Turkey.

Turkey has recently reiterated that the aim of Operation Euphrates Shield is securing a 5,000-square-kilometer area in Syria free of the Daesh threat.
Daesh previously declared Dabiq a sacred town, adding that there would be a "doomsday war" in the town with "infidels." However, the Turkish-military backed FSA quickly liberated the town from Daesh terrorists. Opposition fighters seized it in less than a day.

Now that Dabiq has been liberated, Daesh is expected to retreat to al-Bab. Apart from the important of the town for Turkey and the FSA, it is crucial for Daesh as the terrorist group manages many of its activities from there.

The FSA still has some 20 kilometers to cover before reaching al-Bab. Despite slowing down over the last weeks, the opposition army has boosted its morale with groups within the army solving their inner problems.

Recently, the former president of the Syrian Turkmen Assembly, Abdurrahman Mustafa, asserted that Daesh would collapse if Dabiq were liberated.
Meanwhile, the Turkish military Sunday released a written statement regarding the latest developments in Operation Euphrates Shield. The statement said that 9 opposition fighters were killed and 28 wounded in the clashes.

According to the statement, 29 landmines and 1,180 handmade explosives have been destroyed since the beginning of Operation Euphrates Shield.