Turkey will take part in Mosul operations and we will be at the table, Erdoğan says 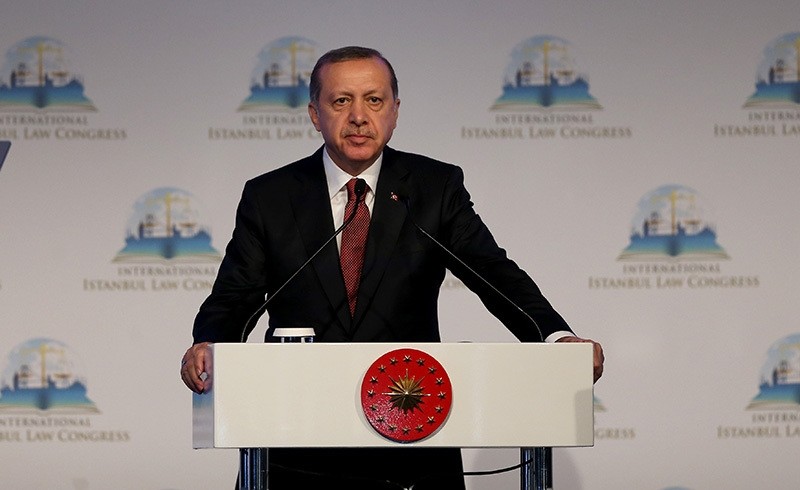 President Recep Tayyip Erdoğan reiterated Ankara's position on the operation to liberate Mosul from the Daesh terrorist group on Monday, saying Turkey will take part in operations and it will be coming to the diplomatic table in the aftermath.

Speaking at the International Law Congress held in Istanbul, President Erdoğan stressed that Turkey has a 350-kilometer border with Iraq, and therefore the country cannot be expected to remain impartial to developments right across the border.

The president also warned against the danger of sectarian clashes if Ankara's concerns are not taken into consideration. Turkey argues that, if the regional ethnic and religious sensitivities are not taken into consideration, the clearance of Daesh from Mosul will not ensure the establishment of stability and peace due to new Shiite-Sunni, Turkmen-Kurdish tensions. Ankara has repeatedly proposed that the operation must be conducted by supporting the local forces in Mosul, rather than outside fighters brought in by the Iraqi central government or the PKK's Syrian offshoot the Democratic Union Party (PYD) and PKK terrorists, also to protect Iraq's territorial integrity.

The population in Mosul, Iraq's second largest city after Baghdad, is largely populated by Sunni Muslims, including Arabs, Turkmens and Kurds. Ankara's warnings to Washington and Baghdad of the possible sectarian clashes as a result of the central government's plan to include Shiite forces in the operation, and the allocation of power to Shiite forces in control and governance of a predominantly Sunni region.

Meanwhile, the president also added that Turkish troops have been very active and effective in training the local forces in Mosul's Bashiqa camp against Daesh terrorists and that they will continue to provide support to the local forces there.

Regarding the criticism from Iraq's central government and authorities from the U.S.-led coalition on the presence of Turkish troops in Bashiqa camp, Erdoğan also questioned whether the U.S. was invited to Iraq during the invasion 15 years ago or Iran-linked militias in Sunni areas after the invasion.

"Nobody should expect us to leave Bashiqa," Erdoğan said.

Meanwhile, diplomatic traffic between Ankara and Baghdad has intensified over the presence of Turkish troops in Bashiqa camp, and a delegation from Turkey's Ministry of Foreign Affairs, led by the undersecretary of the Turkish Foreign Ministry Ümit Yalçın, has been sent to Baghdad to discuss the situation with the Iraqi central government.

The president said that Daesh has recruited foreign fighters from as far as Australia and Turkey has deported 3,800 foreign fighters so far. Daesh is being used as an excuse for the devastation in Iraq and Syria, Erdoğan said, noting that the terrorist group can be defeated right away if there is a common will for it.

Likening the terror groups to boomerangs, Erdoğan criticized international support for the PKK terrorist organization, noting that the expressed support is coming especially from European countries, adding that more than 4,000 files were handed over to German Chancellor Angela Merkel regarding the aid collection activities of the PKK in Germany.

Erdoğan said that the PYD's armed wing the People's Protection Units (YPG) is being supplied with arms as a pretext of fighting Daesh, whereas the same weapons are either handed over to Daesh or being used by the PKK against Turkey.