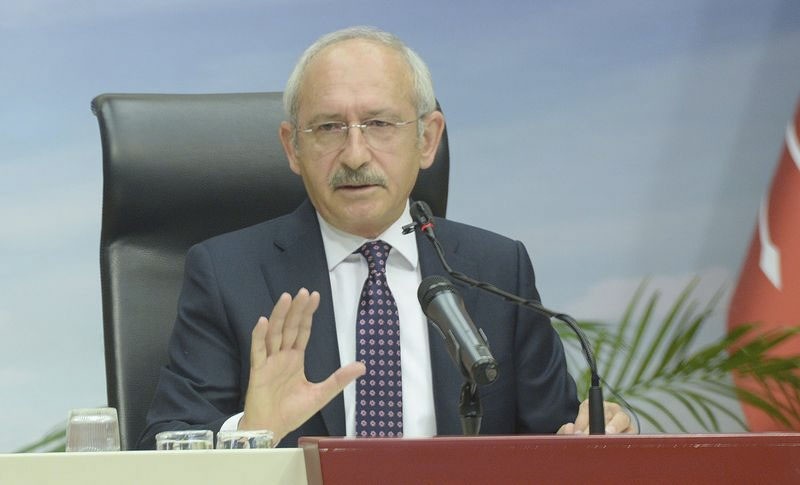 by Daily Sabah Oct 18, 2016 12:00 am
Main opposition Republican People's Party (CHP) Chairman Kemal Kılıçdaroğlu (L) Sunday called on Fethullah Gülen, the leader of the Gülenist Terror Group (FETÖ) and mastermind of the failed July 15 coup attempt, asking him to return to Turkey and go on trial in order to prove that he is inculpable as he claims he is. Speaking at the ceremony of Beylikdüzü Municipality, the CHP chairman underscored that all political parties and NGOs stood against the Gülenist July 15 coup attempt and said the country witnessed that kind of social agreement for the first time in its history.

"At all of my speeches in Yenikapı [Democracy Rally], Taksim and İzmir, I underscored the importance of social consensus that posed after the failed coup attempt. This consensus should not be broken. Let's do together whatever is needed to avoid new coup attempts in future. I remarked the significance of freedom of media and judiciary before. Also, we should not create new victims while fighting against putschers," Kılıçdaroğlu said. Kılıçdaroğlu also called on Gülen, whose extradition is demanded by Turkey from U.S. authorities, saying Gülen should come to Turkey if he is innocent as he claims. "If you are innocent, you would come to Turkey and go on trial in this country. If you won't come, it means that you are guilty," Kılıçdaroğlu said.

In his past statements, Kılıçdaroğlu expressed that U.S. authorities should extradite Gülen. In a meeting with representatives of foreign media institutions on Sept. 30, Kılıçdaroğlu asserted that Gülen should be extradited as soon as possible, saying, "We always reiterated that the Gülen Movement was a serious threat to Turkish democracy as they were disturbing state order by infiltrating institutions. We are respectful of the U.S. decision-making mechanism. If the decision is negative, the CHP will be respectful to the judicial decision but also critical of it."
RELATED TOPICS