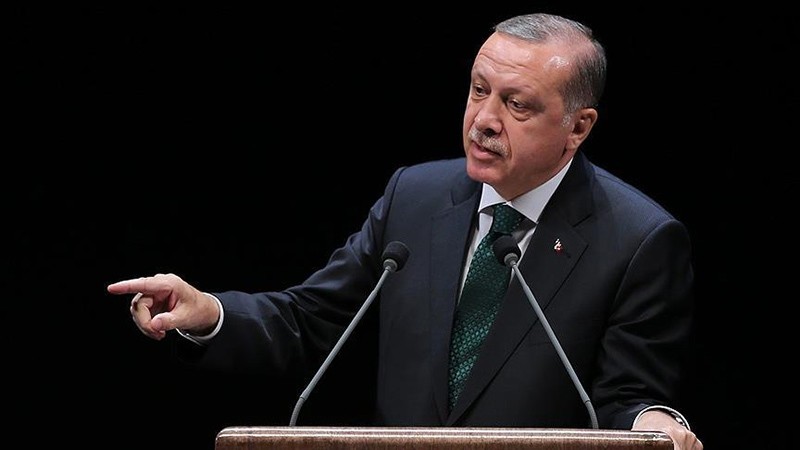 Ankara has restated its goal of establishing a terror-free zone in northern Syria along Turkey's southern border through supporting the Free Syrian Army (FSA) to clear Daesh terrorists as part of Operation Euphrates Shield.

Speaking at the opening ceremony of the academic year at the presidential complex in Ankara, President Recep Tayyip Erdoğan said yesterday that a "terror-free zone" will be established for Syrian refugees in the areas cleared of the Daesh terror group in northern Syria. "Manbij will be cleansed of PYD [Democratic Union Party] elements. We have no tolerance on this issue and we expressed our position to our partners in the coalition. Our goal is to form a 5,000-square-kilometer terror-free zone," Erdoğan said, also underscoring FSA's success in clearing Daesh from Jarablus and Dabiq and that the Turkey-backed group will also move toward Raqqa and Manbij to clear the areas of PYD, People's Protection Units (YPG) and Daesh terrorists.

The recapturing of Dabiq from Daesh was a strong blow to the terror group, as it was known as the ideological capital of the group. Dabiq, about 40 kilometers (25 miles) northeast of Aleppo and 10 kilometers (6 miles) south of Syria's border with Turkey, is also of symbolic importance for Daesh, as the group believes it will be the site of an end-times battle with non-Muslims. Dabiq is the name of one of Daesh's online magazines.

Turkey has been opposed to Washington's decision to support the PYD in northern Syria, as it is considered a Syrian offshoot of the PKK. The PKK is listed as a terror group by Turkey, the U.S. and the EU. Ankara argues that arms support to the PYD is eventually transferred into the hands of the PKK as well as the Daesh terror group and is used against Turkey. As such, Turkey sees the PYD's presence along its southern border as a national security threat.

President Erdoğan said that Turkey has the capacity, determination and ability to fight against all terror groups at the same time and added: "They attempted to establish a terror corridor in Syria. Syria's north is our south. We said, we will not allow this."

Turkey will not allow sectarian strife in Mosul

Commenting on the Mosul operation that was launched yesterday, Erdoğan restated Ankara's determination to participate in the operation on the ground, as well as in diplomatic talks after Daesh is eliminated. The president also criticized the Iraqi prime minister for his remarks against the presence of Turkish troops in the Bashiqa camp, near Mosul, to train the local forces against Daesh. "Before messing with Turkey, go deal with Daesh, the PKK," Erdoğan said.

Drawing attention to the danger of sectarian clashes between Shiites and Sunnis in Mosul, the president said that the army in Iraq consists mostly of Shiites, whereas the population in Mosul is predominantly Sunni Arab, Turkmen, and Kurdish, making up almost 2 million of the population. The Sunni population is being threatened with claims that some 30,000 Iran-backed Shiite al-Hashd al-Shaabi militias are advancing toward the city. The president warned against any provocative action directed against the local population, saying that such sectarian conflict will result in thousands of people fleeing the region, causing a new wave of refugees.

Erdoğan criticized the U.S. for its stance in the diplomatic spat between Ankara and Baghdad, along with its reluctance toward Turkey taking part in the Mosul operation. "We are partners in NATO. Iraq is not in NATO. When you asked for help in Afghanistan, we came to your aid in the fight against terror, not Iraq. Why do you partner with them and terrorist groups this time?" Erdoğan said.

U.S. President Barack Obama wants to kick off a ground operation to liberate Raqqa before he leaves office, however, these ambitions could further sour Turkish-U.S. relations as President Erdoğan has long slammed Washington for joining forces with "terrorists."