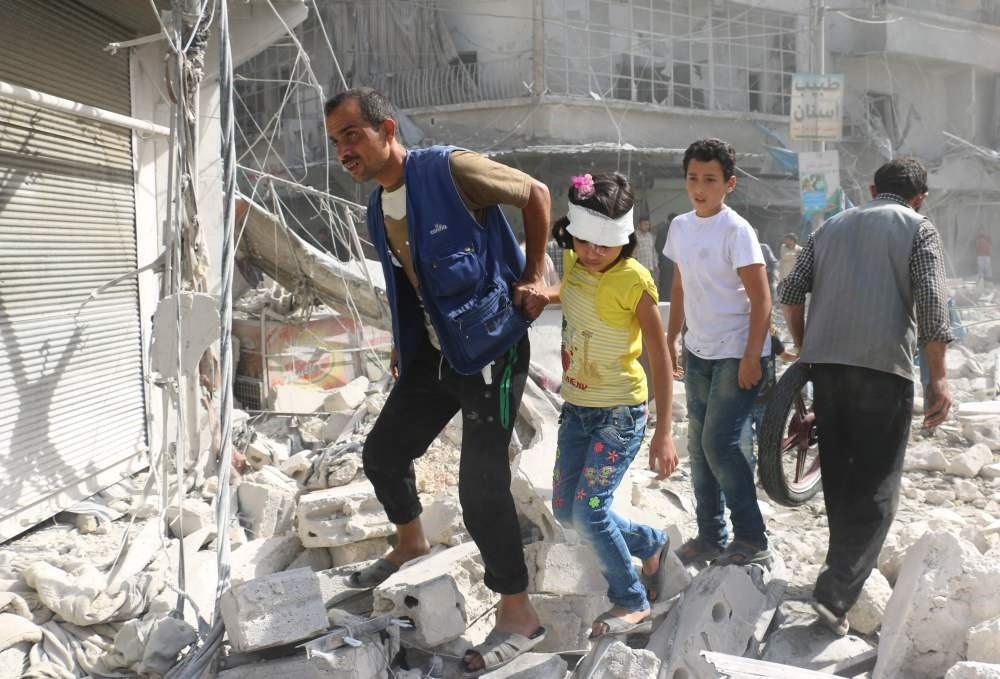 Syrians walk over rubble following airstrikes on the opposition-held Fardous neighbourhood of the northern embattled Syrian city of Aleppo on October 12, 2016.
by Merve Aydoğan Oct 18, 2016 12:00 am

Even though the nine nations gathered in the Swiss city of Lausanne could not come to terms regarding a quick resolution for Aleppo, Deputy PM Kurtulmuş once again stressed that an unconditional permanent cease-fire in Syria is needed

With the recent round of diplomatic talks between nine nations in the Swiss city of Lausanne having failed once more to find a quick resolution to the crisis in Aleppo, Turkish deputy Prime Minister Numan Kurtulmuş spoke of the crisis after a Cabinet meeting at Çankaya Palace on Monday where he stressed the crucial need for declaring a permanent, unconditional ceasefire in Syria, protecting humanitarian convoys headed to the region and emphasizing that the result of the Mosul operation and the outcome in Aleppo will determine the final outcome of political affairs in the region.

Turkey recommended establishing an international aid convoy from various countries carrying different flags to prevent any possible attacks on aid convoys. Kurtulmuş during the press briefing also emphasized the need for an international aid convoy and stressed that Aleppo is the key city for ending the regional crisis, adding that it is a matter of humanity. Continuing by providing information on the Cabinet meeting agenda, Kurtulmuş heavily focused on the regional matters, in which revealed evidently that the recently launched Mosul operation against Daesh, as well as the ongoing crisis in Syria, especially Aleppo, topped the agenda of the government.

Regarding Operation Euphrates Shield, the deputy prime minister said: "Turkey is reaching its goal step-by-step [in Syria]. ...Currently a total of 1,250 square kilometers (482 miles) has been cleared of terrorists," Kurtulmuş stated in reference to the operation which was launched on Aug. 24 with aims to sweep Daesh terrorists out of Syria, which has improved the lives of the people of Jarablus. On the other hand, the liberation of Dabiq in the scope of the operation came after lengthy preparations by the opposition army in cooperation with the Turkish Armed Forces (TSK); however, when one of the members of the media asked whether the operation would include Raqqa and Al-Bab, Kurtulmuş informed that the operations in Syria are to continue to advance towards al-Bab, noting that Raqqa is not part of the operation. "The main aim of the operation is to eliminate the YPG/PYD from Manbij," Kurtulmuş added.

The deputy prime minister stressed that if the situation in Aleppo continues unchanged, then there will be an even more severe humanitarian tragedy, adding: "We [Turkey] will continue to express our position regarding Aleppo," as he further underlined that all developments in the region especially Syria and Iraq will directly affect Turkey as they are the neighboring states.

Despite the Iraqi prime minister's former request for Turkish troops, which subsequently trained local Iraqi forces in Bashiqa, the Baghdad administration is now making baseless allegations against the Turkish troops there training Iraq's local forces to fight against Daesh. In that respect, Kurtulmuş reiterated that the presence of Turkish troops in Iraq's Bashiqa Camp would continue, further noting: "Whenever the situation improves and it is no longer necessary for Turkey to train and equip [the Sunni tribal forces], and to protect our people [in the camp] from Daesh and other terrorist organizations, then Turkey may review the situation. But for now, Turkey will continue to keep its presence in Bashiqa."

With Turkey's intensified operation against the Gülenist Terror Group (FETÖ) following their failed coup attempt on July 15, which resulted with the killing of civilians and officers, President Recep Tayyip Erdoğan had underlined that "new initiatives" towards combat against terrorist FETÖ affiliates would be taken. Commenting on the "new initiatives," Kurtulmuş told members of the media that while 90 percent of the public supports the operations against FETÖ, he added that completely eliminating the Gülenists is the main aim of the government. He had informed that neither the government nor Parliament is discussing the reintroduction of the death penalty for FETÖ members. Along with Turkey's efforts in combating FETÖ, FETÖ was officially designated as a terror group at the Gulf Cooperation Council (GCC) [composed of Saudi Arabia, the United Arab Emirates, Bahrain, Kuwait, Oman and Qatar] meeting. Kurtulmuş announced that FETÖ will also be addressed at the Organization of Islamic Cooperation (OIC) emergency meeting on Tuesday.
RELATED TOPICS